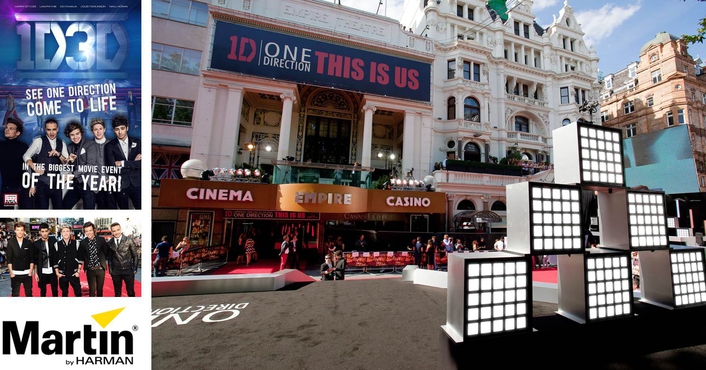 .
With an estimated 70,000 fans screaming and hoping to catch a glimpse of One Direction, the five-member band walked the red carpet outside the Empire Cinema in London’s Leicester Square for the world premier of “1D: This Is Us.” Lighting design and production was handled by premiere veterans Limited Edition Events who utilized HARMAN’s Martin RUSH Series Strobe 5x5’s to add some eye-candy to the daylight event. Emitting an intense but diffused cool light the units produced a myriad of pixel mapped effects which looked fabulous on the global live broadcast.

Nearly 30 Martin RUSH Strobe 5x5’s, provided by HSL lighting of Blackburn, were built into two double sided pyramid set pieces on the main stage along with two smaller pyramids on the DJ stage. With strategic spacing between units an exploded video effect was created. Each of the hundreds of pixels – 25 in each strobe – were controlled individually through the new Martin M6 lighting console.

“The Rush panels are a positive step from the original tungsten panels we all know and love. The cool LED’s provide a crisp clean look to the performance space along with the added benefit of a strobe function and remarkably low power requirements stated Edward Regan, LD. “In addition the kit is smaller and deploys quickly which allows us to be more flexible with our designs. It was a neat set; really good to look at!”

Alongside Regan was Limited Edition’s MD James Barnfather. “The client brief was to create a large high impact effect which would also act as the main backdrop to the interview area; in addition it had to look great on camera and to a live audience in bright daylight conditions. We used a lot of the Jarag-5 panels on the Fast & Furious 6 premiere which the client really liked; therefore we started looking for a similar style product but with a more modern look. The Rush panels worked really well, especially in conjunction with the M6 console which allowed us to create a host of mapped effects in a very short programming window”. 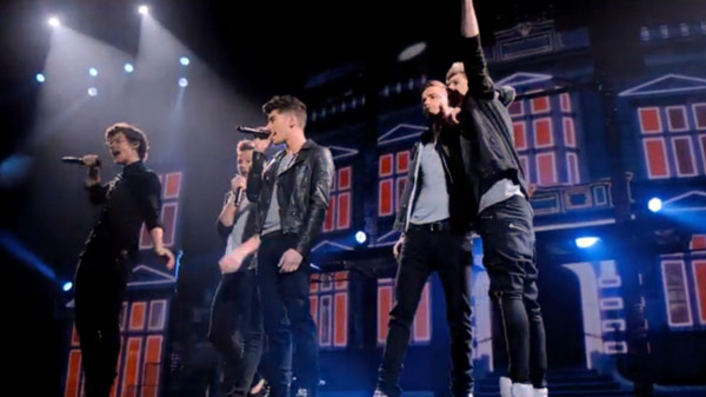 RUSH provided a stellar performance on camera and for the live audience, receiving a vast amount of positive comments from both technicians and the end client.

Highlights of the "This Is US" premiere you can see here

Founded in 1987 and headquartered in Aarhus, Denmark, Martin Professional is a world leader in the creation of dynamic lighting solutions for the entertainment, architectural, and commercial sectors. Martin lighting solutions are industry standard on top tours and events, grace prestigious theatres, energize nightclubs and decorate major television studios around the globe. Other important areas of application are indoor and outdoor architecture and commercial applications where Martin products are increasingly being used to transform spaces with dynamic light. Martin also offers a range of advanced lighting controllers and media servers, as well as a complete line of smoke machines as a complement to intelligent lighting. The company operates the industry’s most complete and capable distributor network with local partners in nearly 100 countries.  Martin Professional joined the HARMAN families of category-leading technology and lifestyle brands in March 2013.

This Is US
Martin Professional