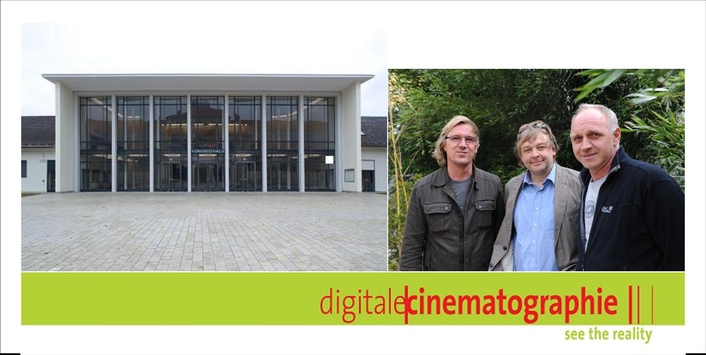 After the Forum at the "Deutsches Museum" closed in mid-2010, the organisers of "Digitale Cinematographie" had to start searching for a new location. Sufficient space was required to host exhibitors, workshops and, of course, a cinema. The exhibition should be located at a central point in order to ensure that it can be easily reached by public transport and — perhaps the greatest challenge — the new location should have charm. A unique style, that perfectly matches "Digitale Cinematographie", which has developed into a very special kind of sector event in the course of many years. In the end, the organisers managed to find just the right property at the Alte Kongresshalle on the Theresienhöhe. 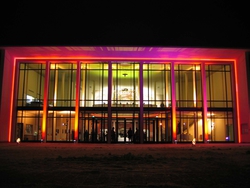 Built in 1953 and thoroughly renovated in 2007, the historical heritage building is an integral part of Munich's cultural assets and indeed "classy". Contrary to the global trends of designing everything and anything on a larger and larger scale, softening profiles and extending programmes whilst making compromises on content, the three organisers Band Pro Munich GmbH, Ludwig Kameraverleih GmbH and MKMedia Production decided to do exactly the opposite. Under the motto of "Class instead of mass", they focused on creating a top class sector-oriented event. The international visitor can expect to be offered excellent specialist workshops presenting the latest digital trends and technologies. In 2011, there will be a practice-oriented exhibition organised by partners in order to present state-of-the-art products and services from the field of camera technology, along with solutions and products for production, post-production, backup and archiving. Instead of one large cinema, there will probably be two smaller "workshop cinemas" in which the field reports of international experts on the screenings displayed become even more interactive. The programme highlights have not yet been defined. However, those who know the three organisers are well aware that renowned and interesting persons from the movie and TV sector will again provide exclusive reports on their projects within the framework of "Digitale Cinematographie" this year. In short: For all film and media producers offering professional products and services for digital film and video production or those who are simply interested in this subject, “Digitale Cinematographie” at the Alte Kongresshalle in Munich from 20th to 21st October 2011 is a must.

“Digitale Cinematographie” was founded in 2002 by Gerhard Baier (Band Pro Munich GmbH), Martin Ludwig (Ludwig Kameraverleih GmbH) and Martin Kreitl (MKMedia Production). As a "High Definition Competence Centre", Digitale Cinematographie has been created as a new platform which is neutrally and critically driven by the idea of revolutionising the German film and TV environment through the use of new technology.For film and media producers from all over Europe, “Digitale Cinematographie” has become an event which cannot be missed. Latest trends and developments from the world of digital film are presented every year on this occasion. This is a very personal, communicative and interactive event for both producers and users. What makes „Digitale Cinematographie” so unique is the smooth combination of the exchange of experience with renowned specialists, the comprehensive outlook on all areas of HD technology, training of young creators - along with the ingenious concept of uniting the transfer of knowledge and practical tests based on exhibitions, workshops and screenings.