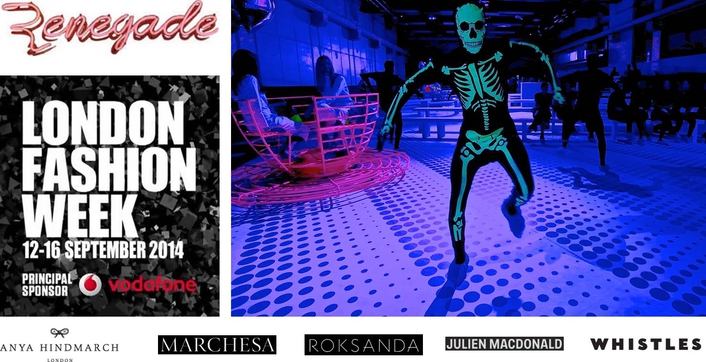 “I wanted to take a completely different approach,” he explained, “It’s very easy to play safe for these shows, but there is no reason why the lighting can’t embrace the same sense of adventure as some of the designers. Being experimental adds another layer of excitement”. Given that the shows have to be lit for perfect photography and video – he didn’t make it easy for himself! 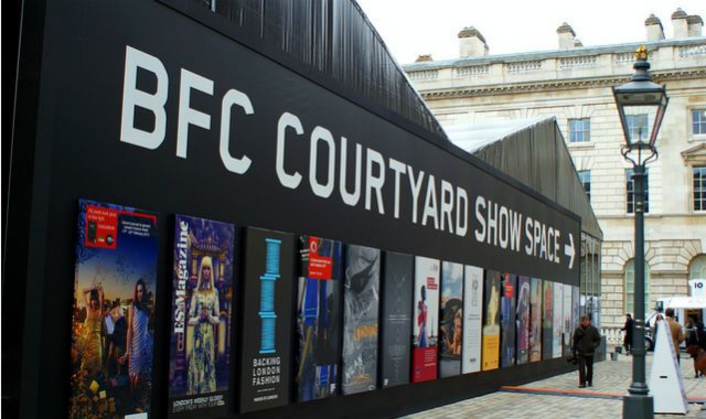 As soon as his initial client meetings started about four months ahead of the LFW SS15 event, Gray started looking at new and different products that he could use and talked to all his regular lighting suppliers including Neg Earth, Panalux and White Light.

He also considered each venue carefully and very specifically, thinking about what type of lightsources would look good in the surroundings as well as the practicalities of rigging, and how he could achieve the all-important task of photo and film friendly lighting.

Simultaneously he discussed his proposed individual concepts with the different design teams.

Anya Hindmarch
Produced by Inca, the show was staged in Ambika P3, 14,000 square feet of contemporary art and found gallery space developed from a vast concrete constructed hall at the University of Westminster. For this show, the space was reduced by the floor being raised to the level of the first balcony.

The challenges for lighting were limited rigging points and power. Guests were seated on six revolving platforms which shifted throughout the show, changing the shape and configuration of the runway from a straight line to two sets of squares to a zig-zag, all of which had to be lit for the photographers.

With all these parameters in place, the only option for Gray to cover everything was to use a large moving light rig. He chose Martin MAC Viper Wash DXs – 45 of which were rigged onto three overhead trusses running the length of the room.

Using moving lights also gave him plenty of additional options to add to the fun and vibrancy of Hindmarch’s own distinctive aesthetic.

All the Vipers were fitted with UV filters, and for one section of the show the lighting switched from the conventional white-light fashion show vibe to dark moody blues, featuring models and dancers in boiler suits with glowing skeleton outfits clutching Hindmarch’s UV quirky and hip sticker hand and tote bags which had also been UV treated.

Both the back wall and the floor were clad with a stretched fabric print, and more kinetic frivolity was added with 18 x 10 metre runs of digital festoon, run on funky colour chases.

Renegade’s Project Manager for this show was Dave Ambrose, Dan Hill was the Lighting Operator using a Road Hog Full Boar with all equipment supplied by Neg Earth together with their Crew Chief, Stumpy.

Marchesa
With the glamour of flouncing silks and billowing chiffons, the beauty of this show was sumptuously ‘modern classic’ for which the Banqueting House in Whitehall provided a perfect backdrop.

Designed by Inigo Jones, the venue was completed in 1622 and is the only remaining component of the Palace of Whitehall as well as the first building in England to feature the neo classical style that transformed the architecture of the day. Its colourful history included the execution of King Charles I of England in front of it in January 1649. 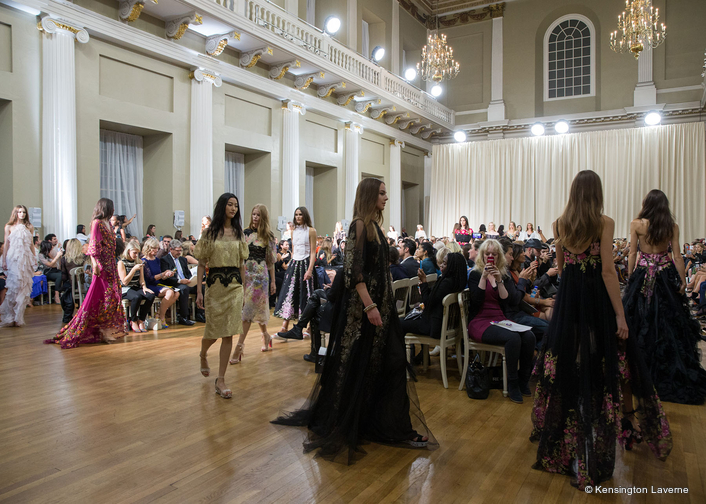 This time, the only spectacle on show was the fabulousness of fashion, with three runways traversing the space and the main challenges of lighting being low over-hanging balconies above the two outer runways ... making the positioning of fixtures tricky but absolutely crucial. 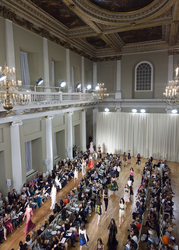 Gray utilized 30 x Panalux HiLos - a low profile softlight source that utilizes a multi-white mix of LEDs and is designed and built by Panalux as part of a range of low energy creative lighting solutions for film and TV. It produces a soft, diffused uniform output with a single shadow that is ideal for this type of installation. Its 70 cm opaque white front is very distinctive and attractive in its own right, and the colour temperature can be precisely tuned.

Twenty-six HiLos were top rigged around three sides of the balcony, with six at one end and another four spaced out along the walls of the room on custom built scaffolding frames. It was also essential than none of the rigging or lighting support structures were visible or encroaching on the integrity of the room.

“I really liked the contrast of these very modern lightsources almost being levitated in this grandiose neoclassical space,” explains Gray adding, “It worked really well both in terms of creating an aura, and achieving all the right levels and quality of light for the media”.

A drape line dissected one end of the room and on top of that another four HiLos were rigged at floor level to provide uniform back-lighting for all three runways. The front array at the other end – rigged on drop arms off the trusses - comprised 24 variable zoom ETC Source Four profiles, all daylight corrected to match the fixtures overhead.

The structural pillars of the room were tightly highlighted with 30 individual PAR cans fitted with ultra-narrow Raylite bulbs and reflectors cans on the floor & daylight 201 to match the show temperature.

Lighting and technical support was provided by White Light for this show, with the HiLos sourced directly by Renegade from Panalux.

The lighting operator was Paulus van Heijkant and the production company was again Inca.

Whistles
Gray was very excited when he heard from producers, My Beautiful City, that this was to be staged in the new pedestrian tunnel linking St Pancras International mainline station and King’s Cross St Pancras Underground stations to the new public spaces, restaurants, offices and homes at King’s Cross, designed by architects Allies & Morrison.

The tunnel features an integrated LED light wall running its entire length which was designed by Spiers + Major.

The tunnel has never been used as a show or production space before and so obtaining all the clearances and permissions was a massive undertaking, but one which was thoroughly worthwhile in the sense of taking fashion and art into bold new contexts.The tunnel is 90 metres long, about 4 metres wide and around 2.8 metres high. Not surprisingly, there are no convenient rigging points for lighting and not much available power. It was also not permissible to use any stands, so the first brain-teaser was to work out how to create a nice even photographic lighting state … running the full length. 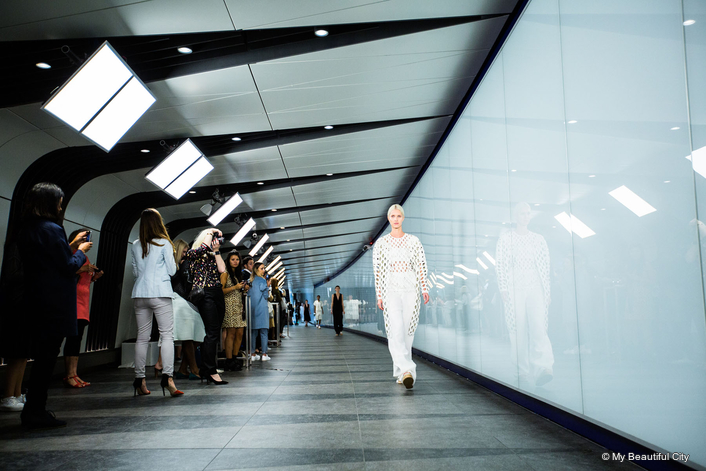 Luckily, every 2.4 metres along the tunnel roof are openings linking to the ventilation system and each gap is fitted with a steel structural brace. After discussions with the architects and  the various station operating bodies, Gray negotiated the clearance to attach some special 2ft rigging brackets to the steel braces that could be used to create production technical positions!

On each of these bars was a tiny white speaker – for transmitting the sound track - and a tunable white TekTile2 LED panel from Panalux.

The tiles are 600 mm square and designed to be integrated into standard false ceiling set ups. They have a super-slim profile and a variable colour temperature of between 3000 and 5800K with no shift in output transmission. Each tile weighs 2Kg and pulls just 0.3 of an Amp in power .. so, apart from looking super cool, they met all the technical requirements of fitting into the space and consuming a miniscule amount of power. 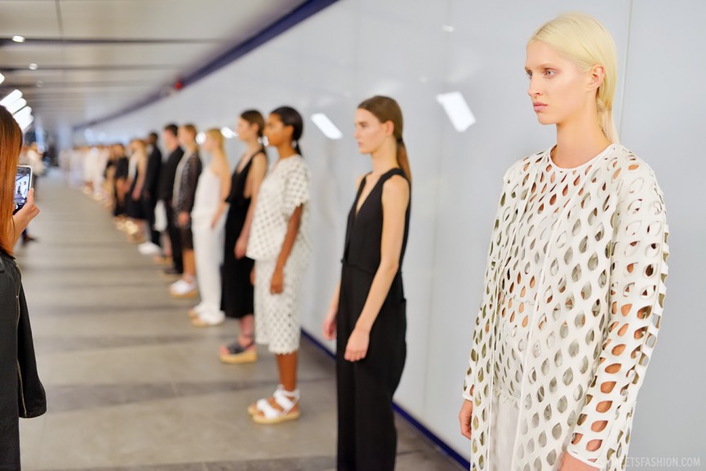 The tiles also have variable clamping options, and in this case, they were attached to the brackets via a half-coupler onto a drop arm, so they could be precisely angled to catch the models faces … and avoid shining into the eyes of the audience.

The ceiling brackets holding the lights followed the contour of the tunnel, and the tiles appearing to be magically floating in the air along its entire length and curvature, a truly surreal effect with which Gray was very pleased.

At the far end of the tunnel six cold white LED fresnels formed the front array – each unit was top rigged via a TV spigot into a hand-picked chrome stand from Panalux’s vast stock.

Renegade’s Crew Chief for this show was Jack Jury.

Roksanda
Gray used 148 of the same TekTile2 fixtures for producers Blonstein’s Roksanda’s show, remarking that it is always interesting to create an environment to match the fantastically bold effervescence of her collections noted for their molten mash-up of synesthesia and style. 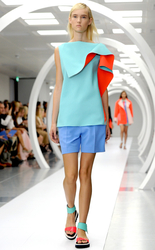 Staged in a brand new almost finished office space, Number 33 in David Street, near Claridges Hotel, Gray worked closely with set designer Gary Card to create an integrated visual space which included a series of elegant white ovular arches – like off-kilter ribs – that threaded around the U-shaped runway, with the floor demarcated by white vinyl.

The TekTile2s needed modifying and fitting into custom wooden surrounds before they could be  integrated into the office’s own false ceiling – which featured 700 mm tiles as opposed to the standard 600mm.

This painstaking process was followed by the TekTile2s being placed sporadically in the ceiling to break up the coverage and to make the appearance look interesting – which was essential, as being low in height, they were visible in all the photographs and video footage.

“It was an incredibly very fiddly and time consuming build and I think I must have driven everyone mad,” comments Gray, ‘But the time and effort was so justified in the end result”.

The dark and moody walk-in state had random TekTile2s flashing and blipping on and off sporadically. Just as the show started the fixtures went into an insanely manic chase which completely disorientated everyone in the room.  “Like a really mind-blowing trance-like state,” explained Gray, and then BANG - the show started with Roksanda’s beautiful and crazy combinations of fluorescence and expression streaking around the catwalk, enveloped by a perfect crisp, radiant white ambience. 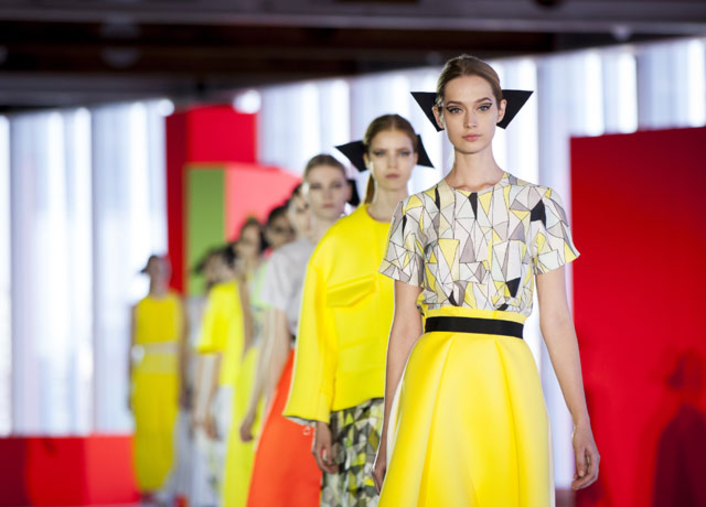 “I always love lighting Roksanda’s shows,” says Gray, “It’s a great chance to be experimental and think out of the box!”

Julien Macdonald
For Julien Macdonald, another show produced by My Beautiful City, Gray and his team moved to the magnificent Victorian main atrium space of the Royal Opera House in Covent Garden, the Paul Hamlyn Hall, also one of the best known event spaces in central London. It is characterized by the intricate glass and iron framed dome roof designed by E M Barry in 1858 and is still known as ‘The Floral Hall’ once part of Covent Garden’s historical Flower Market.

This was a daytime show and the weather was extremely erratic, so the lighting requirement was for bold, bright but soft coverage and no shadows. 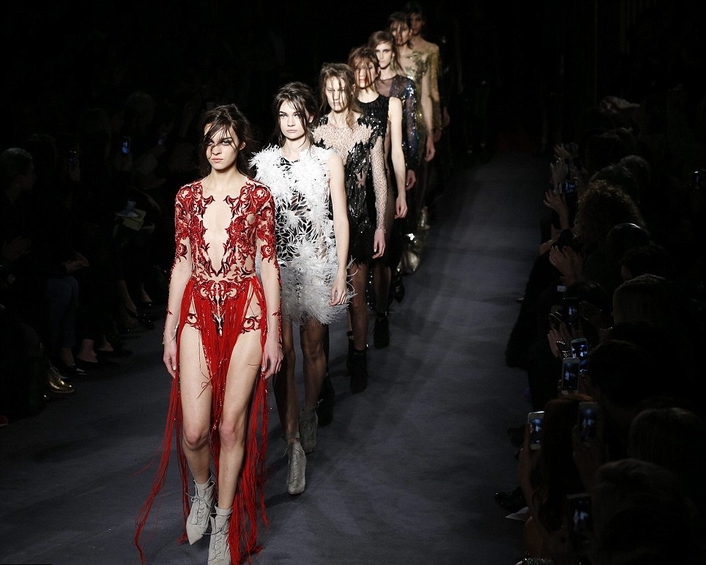 Three runways were designed as part of the set, and the get-in / rig time was extremely tight, so lighting had to be carefully chosen and positioned on two long trusses flown from structural elements of the original iron roof structure.

A 6 metre high front array comprising 12 x Robe MMX WashBeam moving lights was flown at one end - these fixtures were chosen for their shuttering capabilities, variable colour temperatures and quality of light.

Vitally important in here was to be able to tweak the colour temperature right up until the last minute, taking into account the variable weather and constantly shifting natural light conditions and cloud coverage outside.

The 28 HiLos were also chosen as lightsources which looked physically interesting to the eye and complemented the classical Victorian roof structure design with something modern and contemporary. 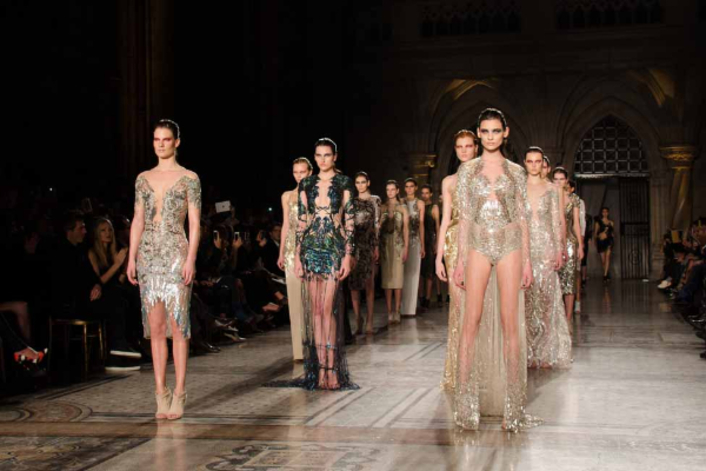 “This aspect of the lighting design worked seamlessly,” commented Gray, “As well as producing the right quality and style of lighting for the show”.

The technical infrastructure and lighting was supplied by Event Concept with the HiLos direct from Panalux.

Renegade’s Crew Chief was Chris Fyfe and the lighting console operator was Kester McLure using one of Renegade’s own Road Hogs.