NEXUS on the Big Stage at the Super Bowl 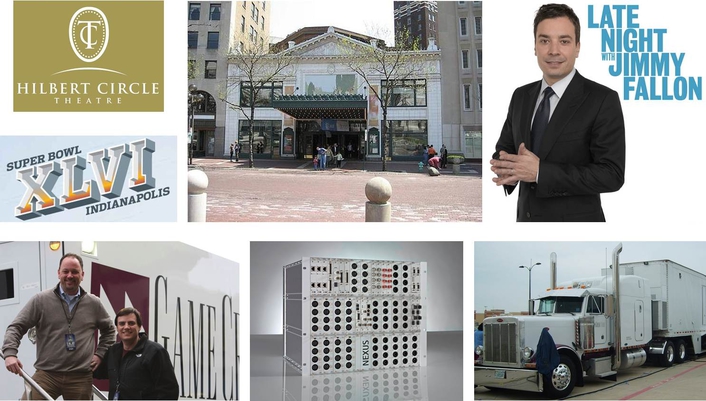 All of the audio signals were transported through the NEXUS system
On Feb. 5 US football fans were descending to Indianapolis, host city of this year’s National Football League (NFL) finals known as the Super Bowl. On this special occasion, famous television late night host Jimmy Fallon broadcast four of his shows on Feb 1st, 2nd, 3rd and 5th from the Hilbert Circle Theatre in the heart of Indianapolis using STAGETEC NEXUS as his audio backbone.

No small undertaking as the mandate was to replicate the studio setup of the regular “Late Night with Jimmy Fallon Show” normally broadcast from NBC Studios at 30 Rock, NYC.  Nathaniel Hare who is the FOH mixer for the regular show was selected as the sound designer for the four dates comprising three live-to-disc and one live show after the big final.

Hare decided on NEXUS to provide the backbone of the audio routing.  All of the audio signals from all stage sources to FOH, PA and monitoring and feeds to the Music Mix Mobile and Game Creek Trucks parked outside were transported through the NEXUS system. The network comprised a total of some 1728 inputs and 1984 outputs. Central to the system was a NEXUS STAR, which connected twelve remote Base Devices throughout the theatre and the OB trucks.  Several consoles connected via MADI to NEXUS including FOH, Music and Main Production; the rest had direct connections to the NEXUS via AES/EBU.

All of the equipment for the temporary installation was supplied by Wireless First, an experienced service provider for TV and touring sound. A big part of the reason for choosing NEXUS was due to its proven track record. “As the show after the Super Bowl was going to be live, I needed to be 150% sure that there would be no equipment failures” states Hare, “and the NEXUS not only has complete redundancy built in but it’s track record on reliability speaks for itself.”