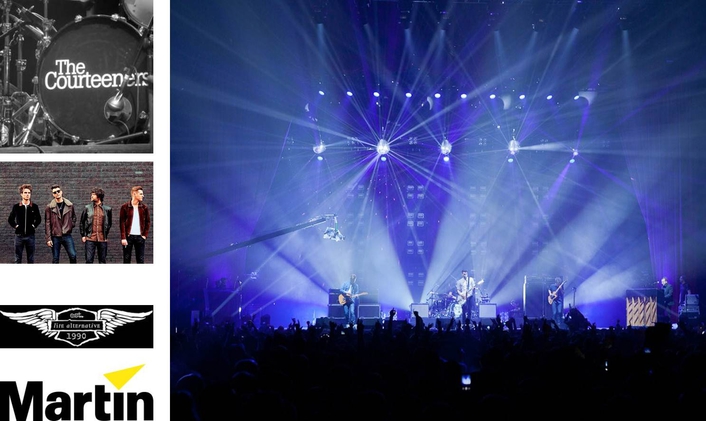 .
Following a short run of festival shows in 2012, British indie rockers Courteneers played a one-off gig at Manchester Arena on December 7th with lighting designer Dan Hill using a predominant Martin rig that included some of the newest MAC luminaires – the MAC Viper Profile™ and MAC III AirFX™ - as well as the MAC Aura™ and MAC 2000 Wash XB™. Lighting supply was from Lite Alternative.

“As the main focal point of Courteeners shows is a mixture of bright tungsten fixtures and a framing of rich red velvet 'theatrical' drapes, I used a number of MAC Aura fixtures to light these, enabling me to keep them brightly lit with a range of strong colors,” stated Dan, who prior to the show invested in Martin’s lighting and set design software package, the Martin ShowDesigner (MSD), which he used to design the show and subsequently show the client. Dan also came up with the stage concept and layout as a whole for the main and B stage.

With the Auras also used in the air and floor for creating strong washes and beamier stage looks, Dan needed a spot fixture that would hold its own against the bright LED washes, as well as cut through the rear wall of tungsten fixtures. “The Vipers ticked this box,” he says. “The versatility behind their beam in terms of zoom capability and gobo quality is second to none.”

Using 18 MAC Vipers in flown trusses, Dan had strong, sharp, narrow beams moving “at good speed” around the stage - or filled the arena with big-air, crisp gobo effects that held their own against bright crowd blinders, “even against the Sharpy's,” he says. “There's a good selection of gobos as standard in the Viper, which only add to the beam work possibilities available from the unit.” 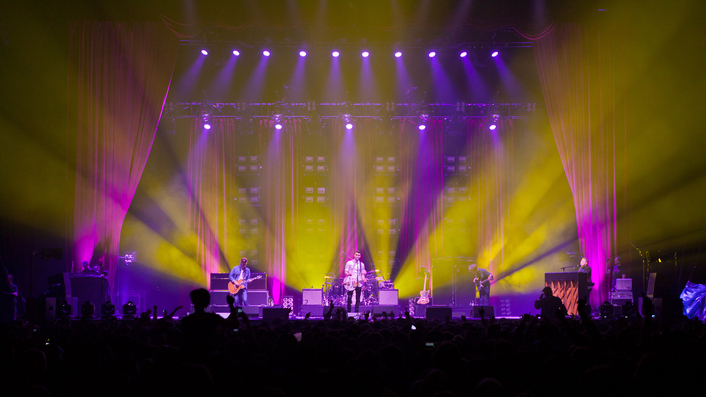 Color quality
With the Viper Profile, Martin put extra focus on light quality via an optical system that does not boost the color temperature of the lamp and where quality of white light is paramount. Dan often turned to the Viper’s CMY plus 8-slot color palette along with the linear CTO, which provides daylight to tungsten CCT control.

“Colors wise, I have been a fan of the colors behind the MAC Auras for a while, but the Vipers complemented these beautifully,” Dan commented. “The whites were 'white' and punchy, and the deeper, saturated blues and reds I was able to create maintained brightness, not limiting me to what colors could be used where throughout the set. With tungsten fixtures being so crucial to the look of the Courteeners live show, having the MAC Viper produce such a pleasant, accurate CTO was great, and was often a safe go-to whilst programming the show!”

Big looks, small size
The Viper is a powerful and versatile fixture in the air, but Dan says it's also worth mentioning the fixture’s physical size as well. “From being able to lift it out of a case with ease, to its flexibility in rigging the unit where space is an issue (on trusses and on the floor), makes the fixture highly tourable and a great solution to the common issue of wanting massive looks from a fixture that doesn't have massive amounts of real estate for it to sit in!”

Last-minute addition
While leading into the band’s Academy tour this spring, the Manchester show also provided Dan the opportunity to be one of the first to try out Martin’s new 1500-watt MAC III AirFX mid-air effects and wash fixture.

“Fortunately, I had space upstage on the floor where the MAC III AirFX fitted in perfectly. The vast beams from even just four of the units worked great providing a wall of color, framing the band effortlessly onstage, whilst at the same time having the ability to add in gobos (there is a basic, but impactful and positively useful selection) and fill the arena with texture and movement so strong, it could easily be the main visual element of a song. 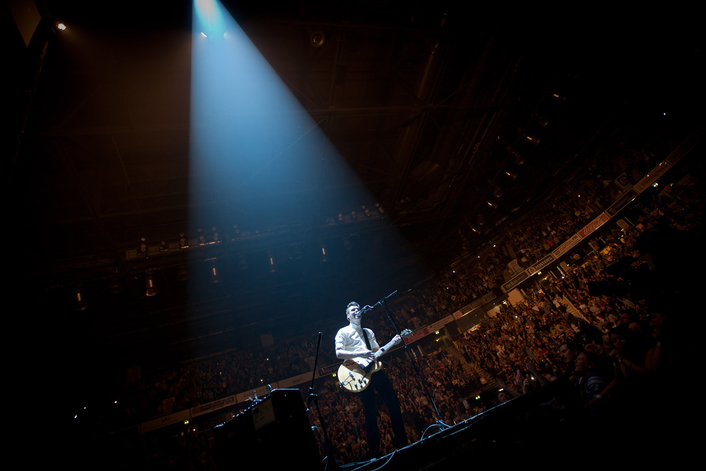 “With quality colors, both in pastel shades and deeper saturated tones that seamlessly tied in with the Auras and Vipers, they were more than welcome as a last-minute addition to the rig,” concludes Dan, who sends out a big thanks to Andy Scott and crew chief Glen Johnson at Lite Alternative.