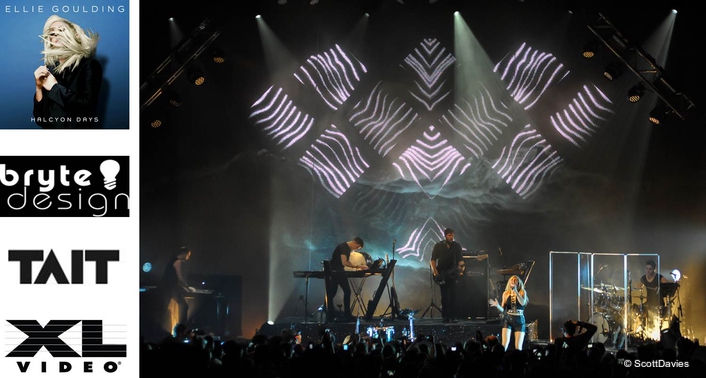 .
XL Video's brand new Hybrid 18mm LED screen made its touring debut on the recent UK leg of Ellie Goulding’s “Halcyon Days” tour, where it was specified by Lighting and Visuals Designer Cate Carter of Bryte Design and integrated into her vibrant production design for the tour.

The touring frames were flown at 45 degree angles so they were an attractive diamond shape mosaic surface upstage.

The idea of using something new appealed to Carter … and also to her business partner Pablo Beckett who created all the custom video content for the show. They saw a demo at XL together with the tour's Video Director Ben Miles, after which all three were keen to use the new product.

XL’s Head of Concert Touring, Phil Mercer, originally suggested the Hybrid 18mm to Carter. “It’s a unigue product and requires the creative use of bespoke content and a clever control solution to get the best out of it,” said Mercer. “I knew that Cate, Pablo and Ben would achieve this.”

Carter had originally wanted a screen with some degree of transparency and also a mesh effect which the Hybrid 18 has when lit from behind, together with the option of running standard content through the low resolution pixels or mapping them directly via Artnet from the lighting desk to give some fabulously fluid sparkling effects. 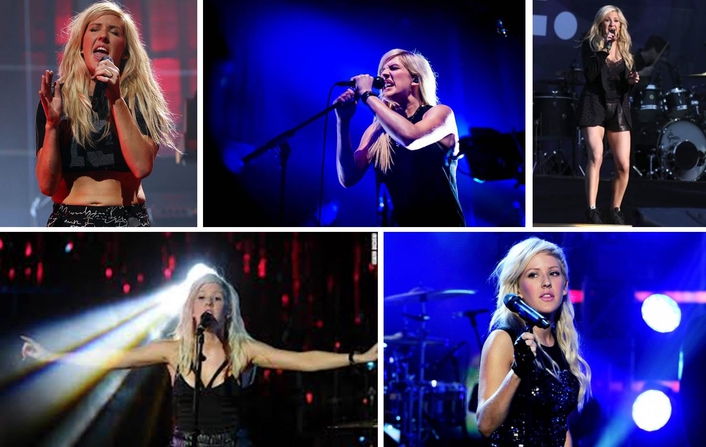 Her stage design also required the screen panels to be orientated at 45 degrees - the diamond shapes related to the original stage set concept from earlier in the tour and to certain geometry in the album artwork - and to have a specific ‘fragmented’ physical effect … So in addition to the creative requirements, it was essential that the LED product was easy to rig.

XL helped produce a solution for this that enabled the screen to be rigged quickly and efficiently at each venue.

A centre cluster of 3 x 3 touring frames made up a perfect diamond shape in the middle, and the other frames were increasingly offset from each other the more offstage they were.

Ben Miles then mapped each of the panels via the LED processors to optimize the overall effect of content running through them at the 45 degree angling and to eliminate ghosting.

Miles specified a Hippotizer media server for control - which he ran from FOH using a Zoo Keeper remote. This was chosen because of its visual interface and "Quick, easy and fun" mapping capabilities, allowing him to either map individual tiles or use the entire screen as a 1280 x 720 resolution surface - according to the content being played.

Some content also had to be re-mapped daily if the screen configuration had to be changed to fit into certain venues. 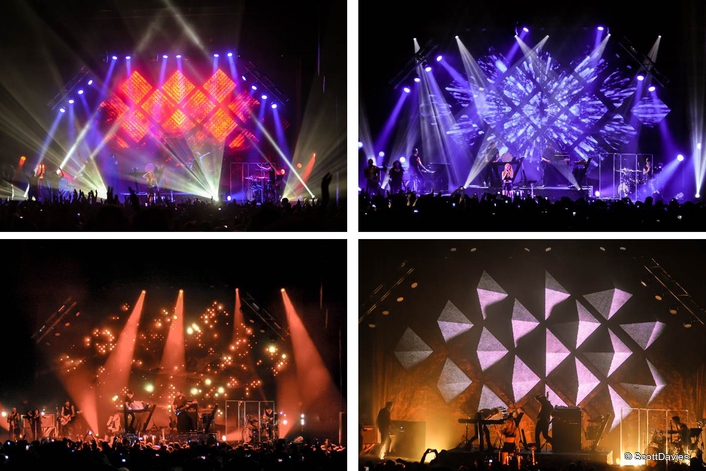 During rehearsals at Brixton Academy in London, Miles and Beckett worked on the existing show video content. They stripped some of it back picking out highlights that would look good run across the low resolution screen elements.

As well as being mapped in the Hippotizer, for full flexibility the low res Hybrid 18 pixels were also DMX patched directly into the grandMA2 console and using its DMX Merge facility, these could also be programmed, treated and run as RGB light sources.

Carter decided to hang a lightly printed sharkstooth gauze in front of the LED screen for general softening and for creating a different texture during the first two thirds of the show and also to bring a hint of ‘theatre’ to the stage.

This was kabuki'd in for the final numbers of the set which built up into a hi energy crescendo, complete with bolder and starker video content, resulting in the LED changing appearance yet again, really showing its versatility and chameleon like qualities throughout the performance. 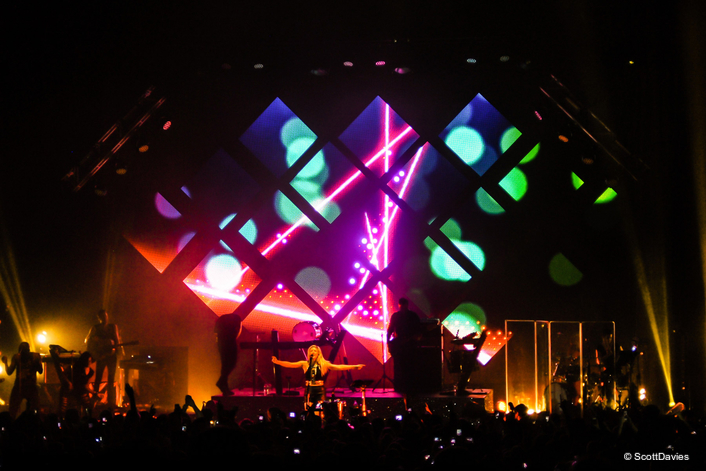 Nilkanth Patel was XL’s project manager, who also supplied Markus Wareham as the tour’s Video Technician. He, Miles and Carter all worked very closely with Lighting Crew Chief Glen Johnson and Lighting Tech Martin Garnish from lighting contractor Lite Alternative whilst on the road as one integrated visual department. Sound for the UK section was supplied by Adlib and the tour is being Production Managed by Derek Fudge.