New SAT.1 Show Series I LOVE MY COUNTRY from the Coloneum 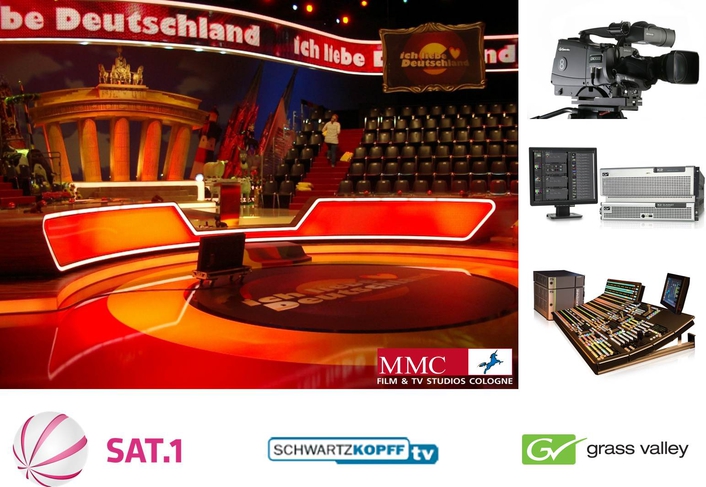 The central element of the stage was a large mockup of the Brandenburg Gate
Following the successful series Minute to Win It and My Man Can, the next big SAT.1 show series from MMC Studios went on the air recently. Since July 15, 2011, SAT.1 has broadcast the new prime time show I Love My Country.

Ich liebe Deutschland (I Love My Country) is a panel game show packed with humor and a pinch of competition. Eight celebrities do battle in two teams of four… and the audience gets to join in!

Each team consists of a team captain, flanked by one twenty-something, one player in their thirties and another in their forties. The stars answer questions about anything and everything that makes their country what it is.

Until the very last minute of the show, the audience is behind their own team 100%. And they've got good reason... Because only the winning team and their following go home with a fantastic homeland prize that only they can truly appreciate!

Despite its rules and scoring system, I Love My Country is anything but a cutthroat competition. The prime time show is about the nation’s greatest films, the most hilarious and nostalgic TV highlights, the most popular songs of the last 30 years, entertaining facts about the nation, historical sporting moments, the nation’s culture and language; but, above all, it’s a trip down memory lane and a feast of recognition.

Internationally, the show is a big success as well. Ich liebe Deutschland is based upon Ik hou van Holland from the Netherlands. The format (developed by Talpa) regularly achieves high ratings in the Netherlands. Moreover, I Love My Country is on the air in at least 10 countries worldwide. The German program Ich liebe Deutschland is a co-production of Schwartzkopff TV and Talpa.

Six shows of Ich liebe Deutschland were recorded at the Coloneum on behalf production company Schwartzkopff TV. The TV production was directed by Volker Weicker.

For the HD-production at MMC Stage 32, seven Grass Valley LDK 8000 cameras were used, including one camera on a SuperTechno 30-crane. Two LDK 8000 in wireless configuration were used for a steadicam and for a hand-held application. Furthermore a GoalCam was used for the production.

The video signals were mixed on a Grass Valley Kayenne (3.5 M/E) at MMC´s HD control room 11. A Grass Valley Summit Server was used for playbacks and five Sony XDCAM HD VTRs were used for recordings.

Because the studio audience plays an important role in the show, an adequate P/A-strategy was needed. Therefore, the live band could use only electronic instruments which created no inherent noise. Furthermore, all musicians were equipped with in-ear-monitoring, so that the audience in the TV studio heard only the vocals when the P/A in the TV studio was turned off. Thus the P/A could be adjusted so that all actions of the audience could be recorded by the atmosphere microphones in the TV studio and therefore be clearly audible on the program sound.

For the lighting, designer Lutz Hugo Kleine-Herzbruch used 28 Clay Paky Alphaspot 1500 HPEs, 48 Robe Color Wash 2500 ATs, 24 GLP Impression RGB 90s, 12 Nova Flowers, as well as 6 VariLite VL 1000 TSs, plus the obligatory white light. Due to the character of the show, static displays of light were used often. This idea was applauded by all people involved because it set the format apart from similar programs.

Several projection screens were used in the set. In addition, MiTrix multimedia bands were posted at various heights as an upper boundary of the set. Barco products were used for realizing the projections and the multimedia feed to all areas was handled by Catalyst servers.

The arena-like stage set-up was provided by MMC’s set construction department based on a design by Jürgen Schmidt-André. The round center stage (action stage) with desks for the host and the celebrity teams was surrounded by the stands for the audience.

The presenters’ area was framed by significant symbols of specific German regions and cities. These were realized as mockups or large prints. Examples were the Cologne cathedral representing Cologne, a lighthouse representing Northern Germany - and a cow, a sheep and a pig representing Bavarian country life, etc.

The central element of the stage was a large mockup of the Brandenburg Gate which was built of wood and styrofoam at MMC’s art department workshops. As a "counterpart" to the Brandenburg Gate, a "floating" pulpit for the studio band was arranged opposite the mockup.