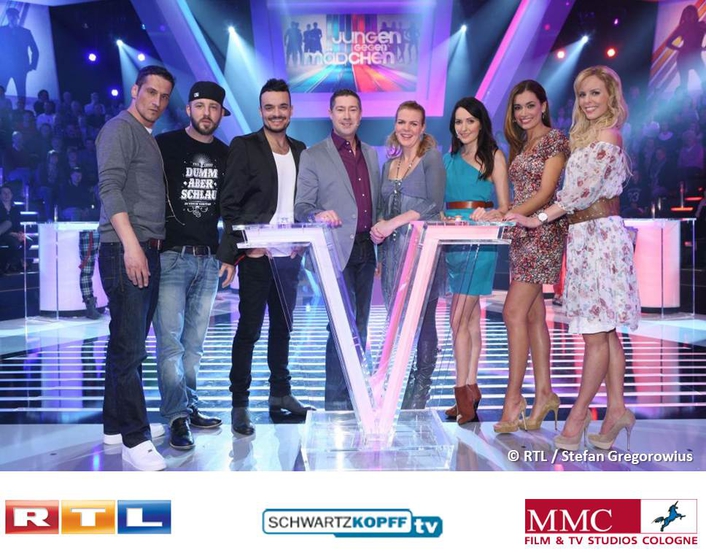 The Team-Captains Mirja Boes and Joachim Llambi (center) with their teams
On April 13th, RTL will present the sensational new Game Show Jungen gegen Maedchen (The Battle of the Sexes) hosted by Comedienne Mirja Boes and by Joachim Llambi—known as a judge of Let’s Dance (Dancing With The Stars).

In a nutshell: Who is better—men or women? Led by their team captains, Joachim Llambi and Mirja Boes, the celebrities are supported in every possible way by a studio audience containing 200 men and 200 women. Which team will win the battle of the sexes? It's all about honor—and attractive prizes for the winning sex in the audience!

Whoever emerges as the winner of this celebrity competition will delight the audience members of their own sex: The 200 men and 200 women sitting in the studio in separate blocks, cheering on their celebrity teams, can rejoice if their team is victorious―because the prize money will be distributed to all the winners in the studio.

Jungen gegen Maedchen is recorded at MMC’s studio 36 at the Coloneum in Cologne, Germany, on behalf of production company Schwartzkopff TV.

For the HD production, a total of 8 GVG LDK 8000 cameras are used, including one camera on a SuperTechno 30-crane. In addition, there are 5 cameras of the same type on Vinten Quattro studio pedestals. Wireless cameras of type GVG LDK 8000 are used as a hand-held camera and as a Steadicam.

The video signals are mixed on a GVG Kayenne XL (3.5 M/E) at MMC’s HD control room 11. For the recordings, 6 XDCAM HD VTRs are used.

The set construction and the media-technology for the show are provided by MMC’s art department.

Mark Achterberg is the director. The lighting design for Jungen gegen Maedchen is by Jerry Appelt. On behalf of MMC, project manager Susanne Knapp supervises the show.