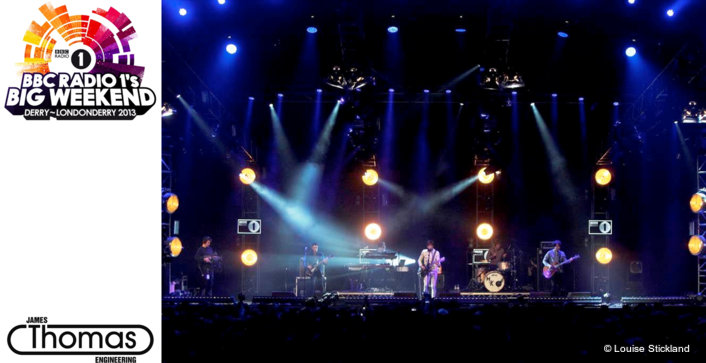 “We received an immediate flood of enquiries from lighting designers and the technical team at the festival wanting to know what these amazing-looking lights are,” says lighting designer, Tim Routledge, who worked closely with JTE on the design of the PATT 2013. “The reaction has been phenomenal.”

The first in a new range of lighting from James Thomas Engineering, the PATT 2013 has been designed to combine a retro aesthetic with modern performance capabilities. JTE designer, Sean Aston, took inspiration from the current trend for old broadcast lighting for the PATT 2013’s appearance and, using JTE’s in-house design experience and facilities, the team were able to manufacture an entirely new retro-style fixture quickly and efficiently in time for Routledge to use it on the Big Weekend.

Radio 1’s Big Weekend Londonderry is widely acknowledged as the first music festival to kick off the summer of festivals. It showcased over 30 acts with headliners that included Rita Ora, DJ Fresh, alt-J and Vampire Weekend and was broadcast live over three nights on BBC Radio 1, BBC 3, the BBC Red Button and online. “With such high profile exposure, it was important to get the bands and stage looking nothing short of spectacular and a tungsten fixture really suited the style,” says Routledge. 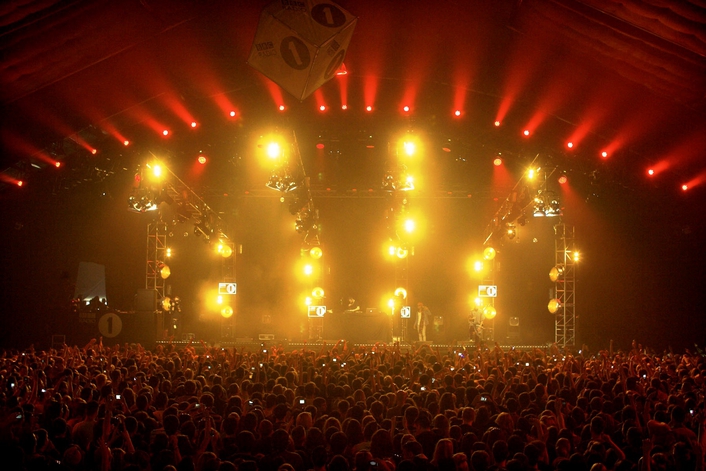 Routledge was commissioned to provide two creative lighting designs which would differentiate between the 1Xtra Arena and the In New Music We Trust stage, identifying the two brands clearly. He chose James Thomas Engineering lighting to theme the stage with two completely different looks.

Using a combination of PixelRange Smartline battens and Robe CityFlex, Routledge created randomly-placed X shapes to brand the Radio 1Xtra Arena on the Friday night. This was then transformed into the In New Music We Trust stage where a succession of new acts were showcased on the Saturday and Sunday nights. Routledge correspondingly altered the stage’s appearance by introducing twelve of the new JTE PATT 2013 fixtures behind the bands and on side trusses at stage level to act as ‘eye candy’.

“The PATT 2013s not only looked great but were homogenous with the tungsten light bulbs we used around the stage and gave lots of background interest for the cameras,” says Routledge. “In fact they looked so cool that the broadcast director, Paul Dugdale, lined up his camera angles to include them in as many shots as possible!

“The show in Londonderry was the first time we have used the PATT 2013 and, because JTE can respond so quickly, it gave us the opportunity to make any small tweaks in the design before they went on the market,” continues Routledge.

“The PATT 2013 was designed with the intention of offering a modern version of existing old broadcast fixtures. Lighting is increasingly becoming like the fashion world with trends and seasons and we wanted to create an affordable fixture that suited current trends with small investment. The guys at JTE simply took a list of my wishes for an interesting lighting fixture and made it reality in an incredibly short time. We really want to continue from the PATT 2013 in the future to both follow and trendset.”