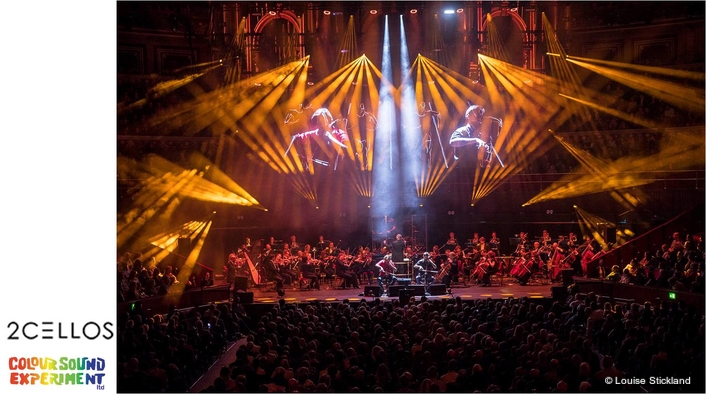 Lighting and video rental specialist Colour Sound Experiment has invested in new Robe MegaPointe moving lights, Blackmagic video control technology and new pre-rigged trusses, all of which is out on the current 2CELLOS tour playing arenas in key capital cities around Europe .

The UK performance was a roof-raising extravaganza staged at London’s Royal Albert Hall with the band accompanied by The Royal Philharmonic Concert Orchestra. They played out some of 2CELLOS hugely dynamic repertoire which went from the decorum and refinement of assorted film scores to the raucous rock-out mayhem of AC/DC and the Rolling Stones covers.

Crt, a big Robe fan, was delighted when Colour Sound was able to offer its brand new Robe MegaPointes! The fixture was launched in September and this is one of its first European tours.
It is the first time he’s worked with Colour Sound and comments that it’s been a “totally positive” experience. “The guys are extremely nice, highly knowledgeable and absolutely dedicated to doing a great job in getting the show onstage every day”. 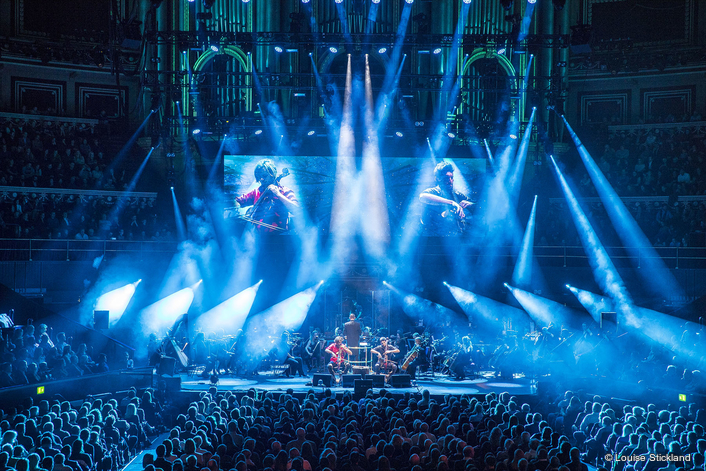 Colour Sound’s crew of Simon Robertson, Frank Williams and David Cattermole are being chiefed by Kester McClure.
The lighting is all toured in the pre-rigged trussing for convenience and to speed up the get-ins / outs. The main touring rig features three 14 metre long overheads trusses - front mid and back, with one more added for the Albert Hall.

The moving lights - 26 x MegaPointes, 20 x Spiider LED wash beams and five BMFL Spots for key lights – are distributed across all trusses with eight of the MegaPointes on the floor. They do most of the work, creating subtle and beautifully composed looks for the first section of the show, augmented with 2-lite and 4-lite blinders for audience illumination, together with strobes on the mid and upstage trusses which kick in later in the set.

Some of the lights were rigged on drop-bars to achieve more separation between the sources.
They played the RAH show with the organ revealed, an approach that worked highly effectively in conjunction with their 10 metre wide x 3 metre deep LED screen. Built from Colour Sound’s BT7 product, this was rigged on a Litec QL52 truss and flown just below the bottom of the organ pipes, filling the space as if it had been specially tailored. 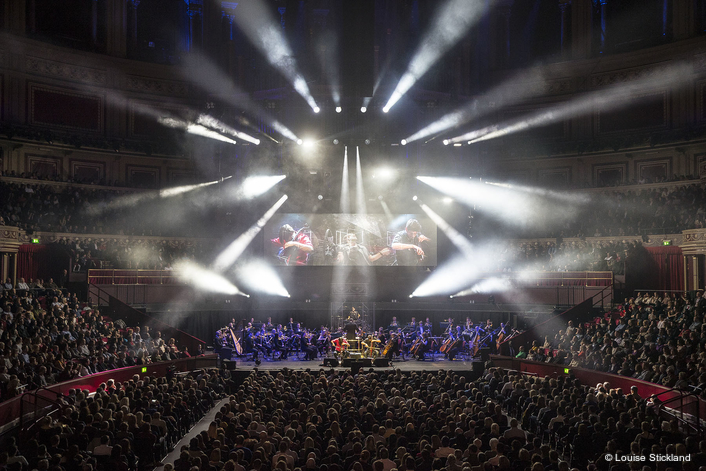 The extra truss at the RAH was rigged with another 6 x MegaPointes bringing the total for that gig to 32.
It still wasn’t a massive amount of lights for an arena tour or a venue of the RAH’s volume and stature … but Crt is a master of less-is-more, and the 40 MegaPointes gave more than enough visual vibrancy at his fingertips to make each number look dramatically different as the set progressed.

The MegaPointes were utilized for numerous effects and eye-candy as well as for profile and beam looks – looking excellent in both modes. The Spiiders took care of all the basic stage washes and had no problem in covering the expanded orchestra for the RAH show, while the colours showed their continuity with the MegaPointes.
As the set started off refined and almost understated, lighting working harmoniously with the playback video, matching colours and textures as they worked through the film scores and other popular 2CELLOS works.

This progressed to the pop / rock section which had audiences on their feet dancing and jumping every night … and this is where Crt was really able to let rip with the lighting, creating numerous epic looks and sequences that reach out and pulled fans into the action.
He programmed and ran lighting on his own ChamSys MQ80 console with a Wing, and Colour Sound providing a complete replica system for backup 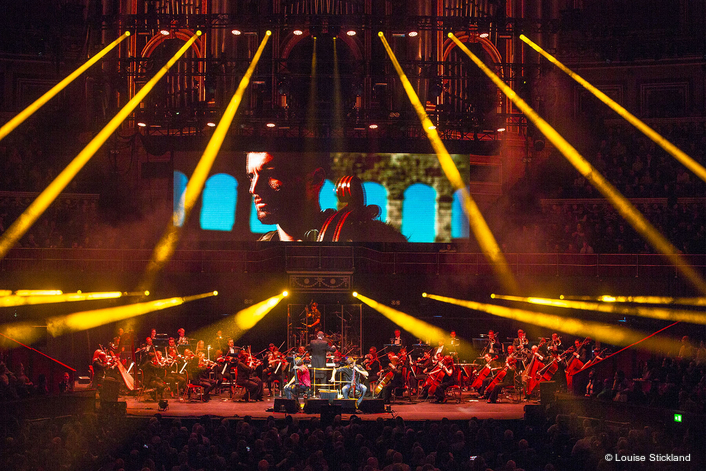 The band’s video director Zaor Kolar puts together the playback visuals in conjunction with 2CELLOS creative director Miro Vidović.
Colour Sound supplied two Panasonic AW-HE60 robo cameras, - one for each of the two stars – Luka Šulić and Stjepan Hauser – which were operated by Kester and combined with an input from the band’s own GoPro focussed on drummer Dušan Kranjc who plays with them regularly. He has some absolutely killer rock-style solos on this tour!

All these inputs were fed into the new Blackmagic kit, first into the Smart Videohub CleanSwitch 12x12 matrix stationed at dimmers, with the signals sent to FOH where they were mixed and output to screen via the new Blackmagic ATEM Television Studio Pro HD switcher operated by Zaor, who also added in the playback footage input from 2CELLOS own Resolume system.

Crew chief Kester has been impressed with all the new kit they have had on the tour, “It’s always good to work with new technology, and the MegaPointes are really bright, small and impressive and utilising the pre-rigged truss greatly helped the speed and efficiency of the get ins and outs”. 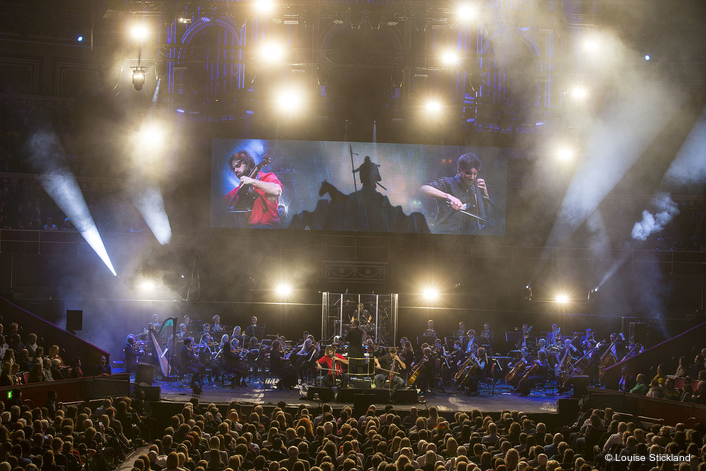 EXE-Rise 1000kg 8:1 double-braked chain hoists were used for all the rigging, and the touring lighting and visuals package was completed with two Robert Juliat Merlin followspots and three hazers.
Colour Sound’s H (Haydn Cruickshank) commented, “We are really pleased to be servicing and supporting this tour. It was an ideal opportunity for all of us to see the MegaPointes in action as Crt really uses them extensively and effectively and great to also get the new video kit on the road. It’s been a great experience working with Crt – we have loved his enthusiasm and imagination – and indeed that of the whole 2CELLOs production team”. 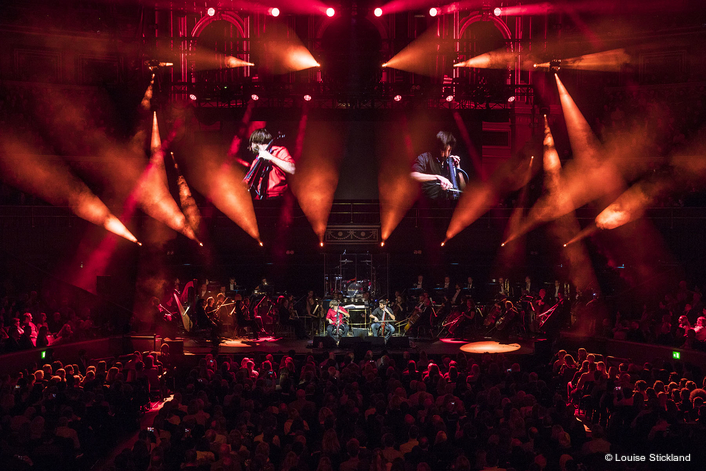 In return, Crt – one of Slovenia’s best known lighting, set and visual designers commented, “It’s been a pleasure to work with Kester and the Colour Sound crew on the road, and H and Alex in the office. They have paid great attention to detail and given fantastic service, so I look forward to the next time”.