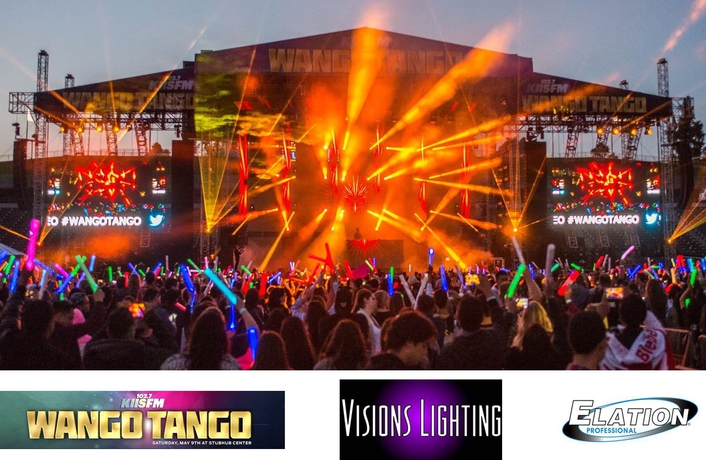 Stage, roof, lighting, video and special FX were all handled by Visions Lighting. “It’s probably the biggest Elation rig we’ve ever had,” stated Visions’ Todd Roberts, who routinely turns to Elation gear for major outdoor events such as the Coachella and StageCoach music festivals, Electric Daisy Carnival and many others.

Spectators were awed by the brilliant light show as the sky lit up with bright beams from the Platinum BX while a multitude of Platinum SBX’s on the upstage wall provided moving spot and beam effects. “Wango Tango is a lot of pop artists who like a lot of flash and beams so the SBX and BX were perfect fits,” Todd says. “They’re brand new fixtures and it was one of the first times we had them out. They were rock solid.”

Although California is suffering through an unprecedented drought, that doesn’t mean a rain storm can’t pop up from time to time. “One night we had a huge rain storm and a lot of the lights got really wet and amazingly enough nothing went out,” Todd explained. “Everything was 100% and we didn’t have to swap one thing so that’s a testament to their reliability.”

Both the Platinum BX and SBX combine a Philips MSD Platinum 17RA 350W lamp with a new optical system. The BX powers out over 15,000 lumens along a tight 3-degree beam for long throws that look spectacular mid-air. The Platinum SBX powers out 20,000 lumens and can play multiple roles as a beam, spot, or wash fixture.

“I particularly like the SBX’s because of their wide range - you can go from a spot fixture to a beam,” commented Brandon Dunning, automations and controls manager at Visions Lighting. “They’re very bright, very intense, and they move quick. The colors in them are also great. The same thing goes for the BX’s. Their intensity is amazing.”

Flanked at either side of the stage was an array of shimmering Protron 3K LED strobes, Elation’s new high-power yet energy-efficient LED strobe light that kicks out 80,000 lumens of power. “The Protron 3K is an awesome LED strobe that I’m really liking a lot,” Todd stated. “It’s the first time we had them out on a show so I had a lot of fun playing with them. They have also been very reliable.” 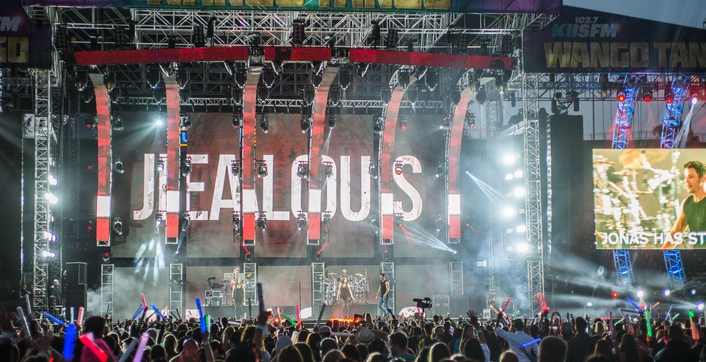 Overall, the team at Visions Lighting brought their best to the yard and created a stellar experience for the throngs of pop music fans in attendance. Brandon Dunning sums up their experience so far with the new Elation gear. “The Elation products have been amazing,” he said. “I work with a lot of LDs and they also say they’re great. They’ve come a long way from where they started to now.”