.
Masked rockers Slipknot are making headlines with a fifth album release, the addition of new band members, their Knotfest concert series and the launch of the “Prepare for Hell” tour – and Clay Paky Stormys are along for the wild ride.

The band just marked the debut of their fifth studio album, “.5: The Gray Chapter,” which was quickly followed by performances October 25 and 26 at their own Knotfest in San Bernardino, California.  They began headlining the “Prepare for Hell” North American tour afterwards.

Trevor Ahlstrand, lighting designer/production designer for Slipknot, is using a package of 30 Stormys CC, obtained from Christie Lites, on the shows.  The new Stormy uses the latest LED technology while retaining all the charm of the classic strobe.  He has positioned a few on each piece truss and several in a row on the floor.

“The show is very asymmetrical with random sticks of different heights jutting out in random places and set elements of a carnival theme,” he says.  “The thing with this group is that they have nine members, three of whom are drummers, so they’re very percussive.  I use strobes to accent a lot of the underlying drum parts in their music; trying constantly to be creative in how I would use the strobes keeping it interesting and different from song to song.”

But Ahlstrand confesses that he’s “always had a problem with using scrollers on strobes.  I don’t like to blast on lights all the time, and I don’t want to abuse the audience all night.  So I try to use scrollers to get a different feel but could never seem to get them all working right.”

He looked at several LED fixtures then discovered that “Stormy CC had the feel of an old-school Atomic 3000 with a scroller on it.  But it was way more intense.  I could get any color you can think of, and when you hit it full blast it was so bright – you didn’t see anything else.  I get all the benefits of a classic strobe with all the control of an LED.”

Reached during rehearsals with the band Ahlstrand reports the Stormys were performing “amazing so far – no technical issues.  My fear with LEDs is balance with color, but the Stormys are all dead on with each other.  They’re extremely bright and fast – I hit whatever color I want at any time.  And I program them the same way I would anything else.” 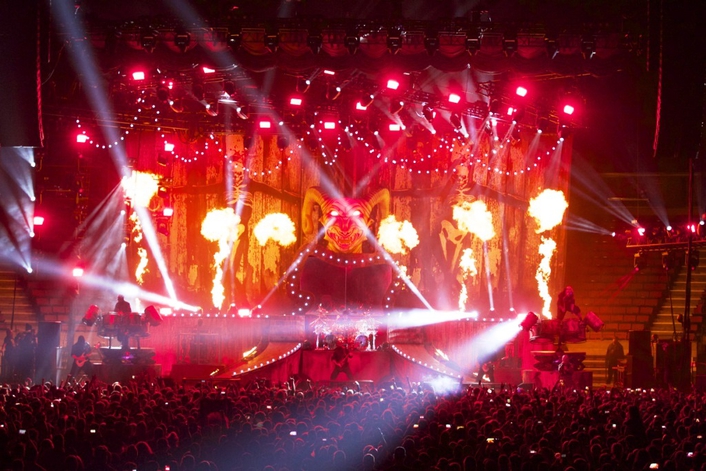 Francesco Romagnoli, Clay Paky Area Manager for North and Latin America, added, “We’re very excited about our new Stormys and pleased to see that they’re working well for Mr. Ahlstrand and the band.”