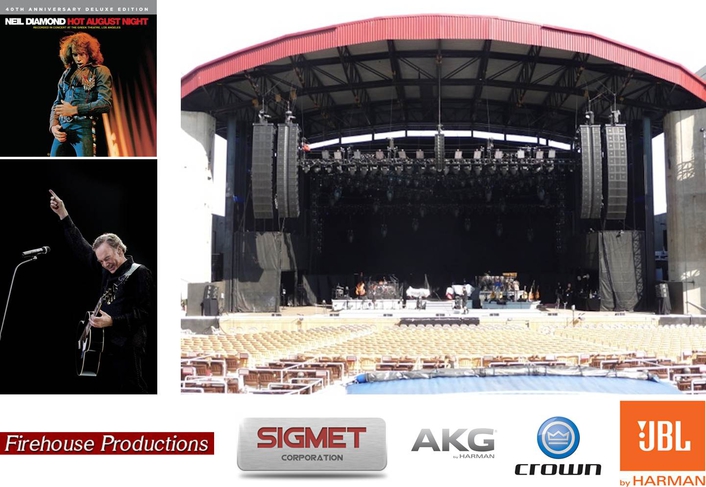 The decision to tour with the new VTX series loudspeakers ultimately came after Diamond’s FOH Engineer Stan Miller and Monitor Engineer Bernie Becker heard a demo of the system earlier this year.

“There is a significant sonic improvement in the JBL VTX series,” Miller stated. “The high-end response of the loudspeakers is quite amazing. We are never close to pushing the system too hard, which is unique. The peaks in various venues are usually under 100dB, making it exciting yet comfortable. It is a very musical system.”

“There is so much headroom with the VTX series, the audio is much cleaner and more direct,” said Sam Helms, President of Sigmet Corporation, a HARMAN representative based in New Jersey and Pennsylvania. “Everything is running AES digital, completely from the mixer consoles to digital inputs on the Crown I-Tech 1200 HD amps, then to the components of the VTX loudspeakers. It gives us ultimate control and produces high-quality audio.”

Chris Russo, Systems Engineer at Firehouse, stated, “City to city, night to night, the VTX performed brilliantly. The system consistently delivered every detail of the mix to all the seats in the house.”

Diamond is a true professional and never stops honing his craft, according to Miller. “From the first show to the last show he is constantly evaluating everything, from song order to how the set flows,” he said. “We even discuss the music that plays while the audience is leaving the show—everything has to be perfect. VTX and the other HARMAN products give us the confidence to perform at our highest level. The support has also been amazing and it is one of the reasons we have remained so loyal to HARMAN.”