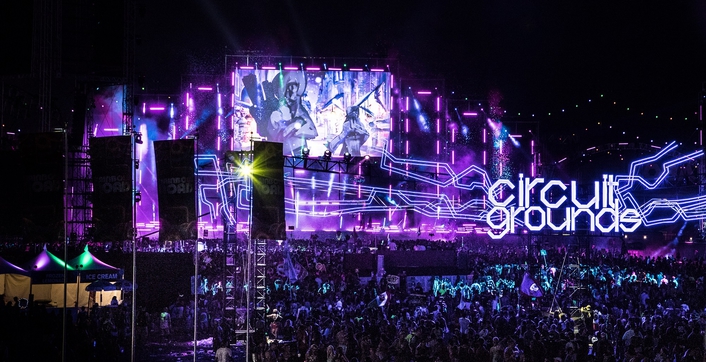 The 360-degree immersive design featured huge LED screen-topped structures, towers and bridges, along with the lighting and video to support it, the creation of production and lighting designer Steve Lieberman of SJ Lighting. Hundreds of Elation Professional Colour Chorus 72™ LED batten wash lights, Cuepix Blinder WW2™ white light blinders and Opti Tri 30™ RGB PAR lights were used to enhance the mammoth setup during the three-day festival. This was EDM on a grand scale and Lieberman placed lighting on almost every available space.

AG Production Services provided the structure and full technical package for the EDC 20 Circuit Grounds stage, which, because of its increased size, basically doubled as a second main stage and hosted top acts like Party Favor, Adventure Club, Martin Garrix and Above & Beyond.

Some 292 Colour Chorus 72™ batten wash lights, a 6-foot LED strip light with 288x 3W RGBA LEDs, were mounted around all of the LED screens, as well as across eight bridges that connected each of eight towers to the main stage. All of the Colour Chorus strips were run in 49 channel mode so that designers could have maximum control and create running effects.

“They are durable and high intensity and fit our needs when detailing and highlighting a truss design, not just coloring it,” stated Steve Lieberman of the Colour Chorus 72 fixture. “It can do many things - subtleties, sine waves, and you can easily link the fixtures together. I also needed high numbers of fixtures and vendors have them which is a real benefit.” Mixed between the Colour Chorus strips and strobe lights around the LED screens were 156 Cuepix Blinder WW2™ white light blinders, high-impact blinders that house 100W 3,200K LEDs for high-density bursts of light that mimic the look of an incandescent source. Lieberman stated that the linear LED fixtures, strobes and blinders were placed to highlight and accentuate the shapes of the environment while also creating symmetrical looks and movement in the 360-degree space. 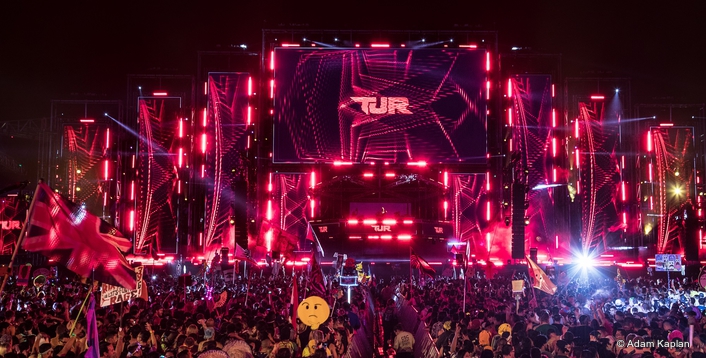 Used to highlight the spectacular truss design and mounted in the 12” truss in the towers and on stage were 398 Elation Opti Tri 30™ RGB PAR lights, a compact fixture that Lieberman has found quite useful on many of his larger designs. “It has a small profile and great output for its size,” he says. “It fits perfectly into 12” truss and makes for a clean detail aesthetically. And because it fits inside the truss if the focus is slightly off they still look good and you also get a nice reflection off of the truss aluminum.”

When dealing with such large quantities of lights, the need for an easy-to-use fixture was great. Lieberman continues, “We use 100’s of these lights and we’re often dealing with stage hands that might not have a lot of experience. The Opti Tri is easy to mount, easy to address and one guy can put twelve in a basket.”