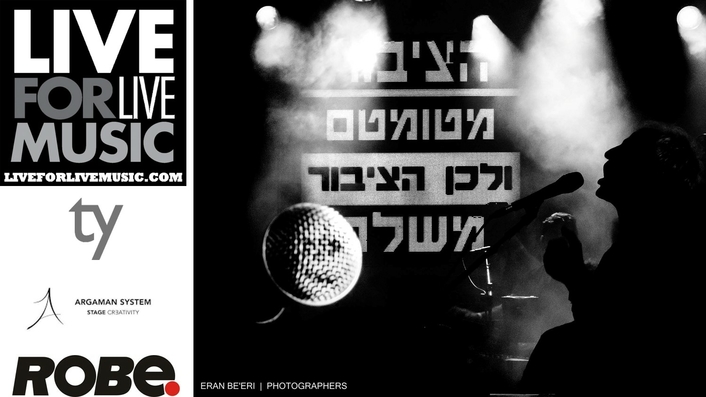 A star-studded line of music stars and artists performed during a protest concert in Charles Clore Park, Tel Aviv, titled “Behind The Scenes: An Assembly of Solidarity” to draw attention to the plight of freelancers, backstage technicians and all the zero-hours contract workers in the Israeli event industry whose livelihoods have been decimated as the music and live event industry has been paused in the fight to control Covid-19. This solidarity rally was initiated and produced by Tali Yaacobi Events Production and backed by Inbar and Marius Nacht – an Israeli entrepreneur, social activist, and philanthropist – who made a generous donation to all the crew working on the show.

The lighting and audio were supplied by Argaman Systems – including a large Robe moving light rig which was designed by Cochavi & Klein and operated by two of Israel’s best-known lighting professional, Eran Klein (of Cochavi & Klein) and Ronen Najar.

When Eli Cochavi (CEO of Cochavi & Klein) was asked by Tali Yacobi to join the production, he assembled the design team, with Eran Klein as head of design and Omer Israeli as lighting designer. They instantly started sparking ideas and enjoying a great synergy as if a single day had not passed since they were separated by the Covid-19 lockdown! 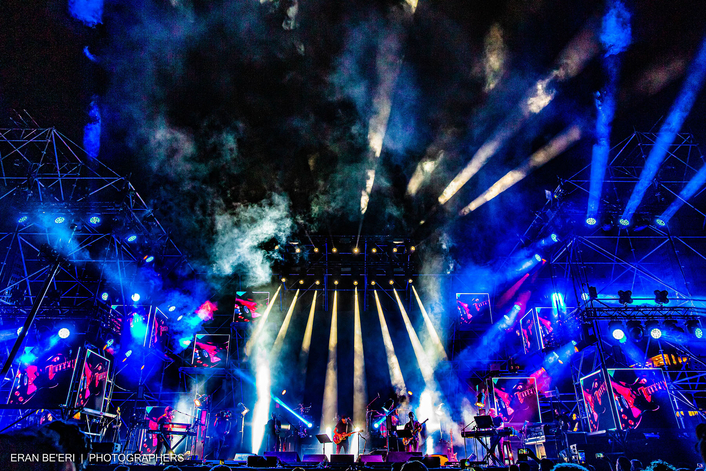 Stated Eran, “Our industry was the first to shut down in late February and will be the last to come back … and that includes anything related to ‘culture’. With complete silence from the government department of sport and culture, we feel strongly that the officials don’t really comprehend exactly what we do, why we do it … and especially how important our production industry really is! We feel invisible, and this protest was to raise awareness of the role of the whole performance industry in a functioning society!”

Eran also recalls the absolutely electric atmosphere and emotions boiling over, especially during closing number, with veteran Israeli rocker Shalom Hanoch onstage belting out his seminal hit “Waiting for the Messiah” accompanied by every person in the estimated 3000 audience.

Concerts in Israel are still banned under state of emergency and social distancing laws, however contained protests are not! This gig took place with the backing of the Israeli police and the city of Tel Aviv.

And, the pressure was on … as they had only 24 hours to design the lighting!

The 14-metre-wide by 8-metre-deep stage was supplied by the Stage Design Group – with video from Clean LED and all the onsite health & safety delivered by B-Safe.

The stage design – by Avi Fahima of Forma Studio – featured a series of Layher structural cubes offering a fragmented and broken look, and the visual design including video and lighting followed this concept. The actual performance space was smaller than normal as it was a protest rally rather than a concert. 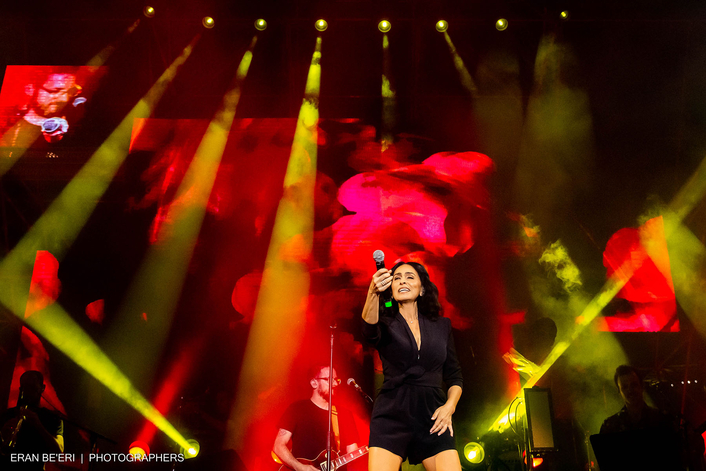 The lighting design was based on the fact that the occasion was to highlight behind the scenes workers, so some fixtures were placed literally “behind the scenes” and in inaccessible places to aesthetically emphasise this fact and in doing so actually representing the backstage community.

“They shone through the metal structure – bursting out … almost struggling and highly symbolic, but at the same time giving depth and meaning to the stage” explained Eran.

Everything on the stage apart from assorted generics, strobes and a couple of other wash lights was Robe!

Forty MegaPointes were used in multiple positions – eight each on the two upstage trusses above the band which where outrigged for different levels for enhanced depth. There were to additional L-shaped trusses mid-stage, each with six MegaPointes, and another four on each downstage truss outrigged from the inner PA towers and facing the crowds. Four more were on the upstage risers.

The Spiiders were grouped together for side washing across the stage and in two clusters in between the MegaPointes to attain big anthemic inspirational looks and punches.

For key light – because there was no time to install a ground support system as the police allowed only one day setup, they used six BMFL Blades a side in two rows.

The short timescale was a major challenge for all involved and the initial designs also had to be downscaled as the police were wary of attracting too large a crowd!

The venue was swapped once and some of the artists names could be released two days before the rally date, and even then, some remained secret … making for some genuine surprises and goosebump moments on the night. 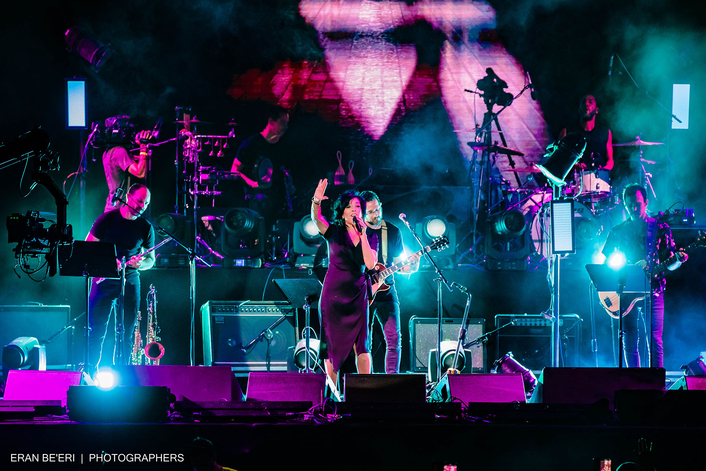 “No-one minded the many extra challenges due to additional Covid-19 safety restrictions and requirements all of which entailed extra care, attention and procedures” explained Eran, “Every single person involved backstage and on the production was so eager for this to happen, that even working like crazy in 34 degrees C … felt incredibly good!”

The rally lasted two hours with a combination of speeches and music.

Best moments included halfway through, when the sound was cut out, the lights blacked out and all eyes fell on the FOH position as leading Israeli sound engineer Lior Tevet grabbed a microphone and made an impassioned speech about the value and contribution of all the technicians, designers and production people behind the scenes. All those who make the cogs and wheels of the industry turn.

“All eyes and ears were totally focused on him … it was an incredibly powerful moment as he introduced the whole team working backstage and with all the artists” recalls Eran.

“It was amazing all round” he adds, describing how everyone working on the event  “was so into it … all had that “stupid” smile on their faces … it was how I imagine the Woodstock vibe must have been!”

With freedom and justice in the name of music in the air “it was pure magic - not a care in the world” he enthuses, with many industry veterans and top professionals rocking up to support the action!!!

Heading up the production team was Ofer Gover, working with director Rubi Cohen of the Rosh Hutsot Group. The production manager was Lea Buskila, the operations producer was Adva Mainz, Eran Mitelman was the musical director, and the sound design was created by Yair Goren (with live audio operated by the aforementioned Lior Tevet). 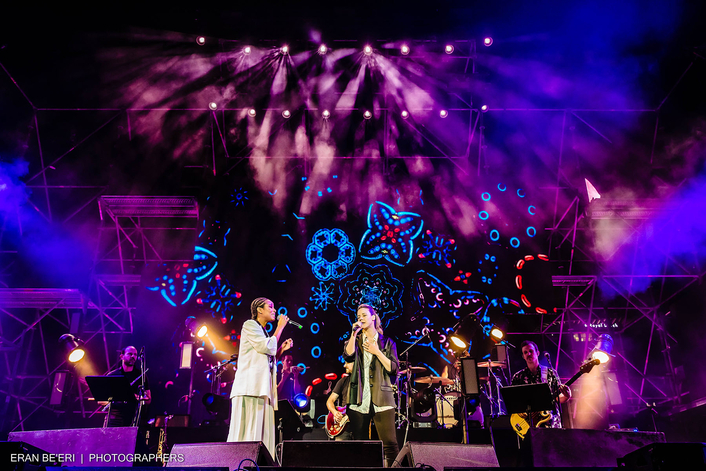 The live camera / IMAG mix was cut by Ido Kagan, video content was produced by Asaf Diamabt and the VJ was Dorian Natan. All the technical production was co-ordinated by Eyal Katz + Yochai Tamir, with Guy Sadot keeping busy as the official videographer.

Israel has dealt highly effectively so far with containing the Coronavirus pandemic, closing its borders early, declaring a national state of emergency and imposing an extremely strict lockdown in March together with other restrictive regulations on movement, etc., which started being cautiously eased in May.

The latest news is that live events are likely to re-open in mid-June with small concerts up to 500 people and theatres able to open with restricted capacities.

“Behind The Scenes: An Assembly of Solidarity”
Tali Yaacobi
Argaman Systems