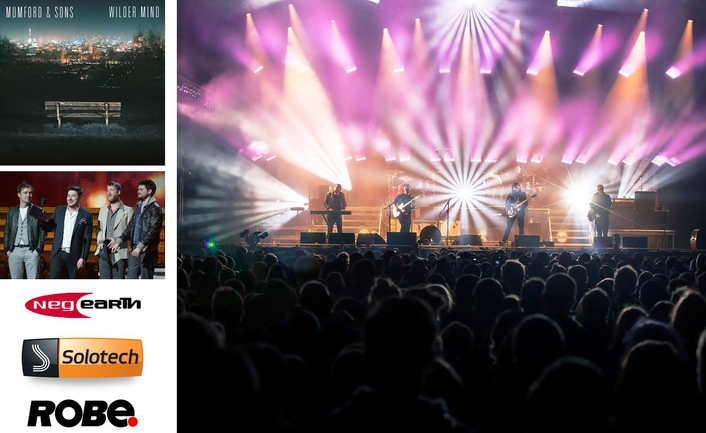 Mumford & Sons are on the road in support of their acclaimed ‘Wilder Mind’ third studio album, currently in Europe playing a mix of own-show headliners and festivals in picturesque locations. LD Ed Warren specified 32 x Robe BMFL Spots and 10 x CycFX 8s which are being supplied by Neg Earth in the UK and Europe and Solotech Canada for the North American sections of the tour.

As the full rig can only be realised in a few locations in Europe, several variations of the design have been developed to deliver as much show continuity as possible, even when able to install only the minimum lighting elements.
It’s the first time that Ed has designed BMFL Spots into a touring rig – to which he is adding his own touches of visual magic and invention. Eighteen BMFLs are spread out across three U-shaped trusses which increase in size and also all move on a Kinesys automation system. The fixtures are alternated with bars of 6 PARs in a juxtaposition between classic and the very latest stage lighting technologies.

Ten BMFL Spots on the front truss are used for key lights, front stage washes and audience illumination and five BMFL Spots on the upstage risers shoot into the crowd and produce dramatic through-the-band shots.

They are the main moving lights of the show.

The CycFX 8 is another first for Ed on this tour, picked after seeing them demo’d at the Robe factory in the Czech Republic.

They are positioned in a line upstage to up-light the custom backdrop which was made by Hangman, comprising ten 8 ft wide by 20 ft tall frames, fitted with 30 degree angled slats for a louvered look. These are made from a metallic cloth and velcroed over onto the frame, adding a background presence and a 3D feel to the stage space.

Ed has been using Robe products regularly in his work for the last 2 - 3 years and was one of the LDs who first saw the prototype BMFL Spot at the 2014 Commonwealth Games in Glasgow. 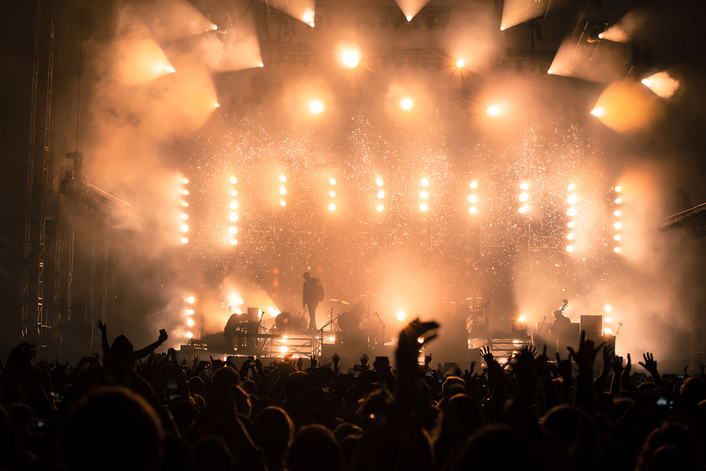 “They are great,” he comments, “Fast, bright and do everything I need”. With many of the shows outdoors and playing at least an hour in daylight, he wanted powerful sources that could be seen throughout. The BMFL, specifically designed for arenas and stadiums, is proving an excellent choice.

They are used for all the general washes, for key lighting, for gobo looks and texturing and for colours and for blasting out into the crowds and right to the back of the arena.

During one recent daylight focussing session onstage, Ed – focussing wirelessly via iPad - recalls with a grin, that the trombone player Dave Williamson mistook the beam from one of the front BMFLs … for the sun! It was simply THAT bright!!

The lighting aesthetic for this tour is about creating large and dynamic rock ‘n’ roll ‘moments’ with a modern edge, rather than about visible movement. Instead, it concentrates on the subtleties and finesse of changing colours, silhouettes and the nature of the sources.

He definitely didn’t want a beamy looking show, and when pitching ideas to the band he showed them photos of some highly memorable 1980s stage and lightshows like Hall & Oates, Billy Joel, Queen, etc.

Ed, known for his fresh and innovative approach, brings yet another twist to the Mumford live look that he’s been crafting since 2009. He’s used Robe LEDWash 600s on previous Mumford designs and these and Pointes on Metronomy.

Much of their album artwork, press and publicity shots feature neon lighting effects, so he had bespoke neon strips fabricated which are attached to the back frames, the trusses and staging. He worked closely with Light Initiative team to create 120 LED-framed PAR cans at the back, which add several new dimensions to that classic original rock ‘n’ roll lightsource which is combined thoughtfully with the BMFL Spots and CycFX 8s.