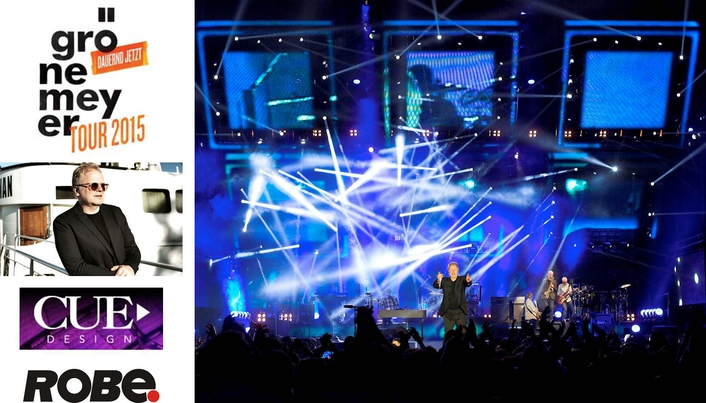 The live show sees plenty of action, with Grönemeyer drawing on his extensive back catalogue and primarily rocky sound
Show designer Gunter Hecker brought a flourish of industrial style to the lighting, video and stage environment that he created for the latest tour by German superstar Herbert Grönemeyer, prolific singer, composer, musician and actor and one of Germany’s most successful ever recording artists.

Once again Gunter worked closely with Marc Lorenz as his lighting director and technology integration specialist, and together they brought a unique look and energy to the show with a centerpiece comprising six automated pods containing video screens and a total of 96 Robe Pointes. 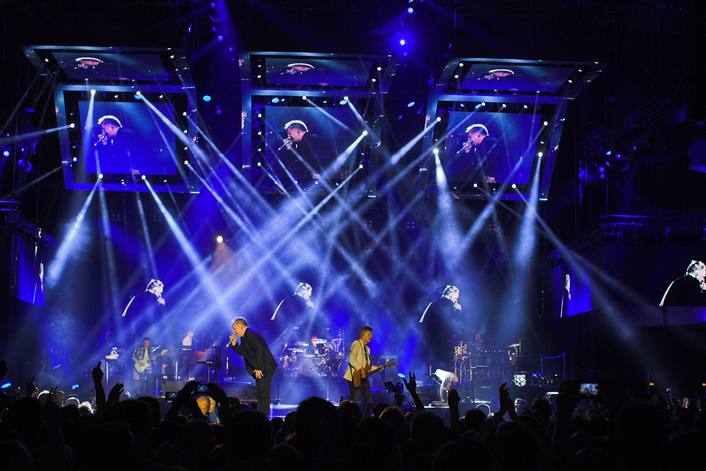 These can move on multiple axes into a variety of positions, and completely transform the shape and feel of the performance space.

Gunter and Marc often use Robe products for their work, the last time being earlier in the year, for the 2014/15 tour by rappers Die Fantastischen Vier for which they also used Pointes and BMFL Spots. For this one, they needed a small, bright fixture that was very fast and compact enough to be mounted in the borders of the pods. 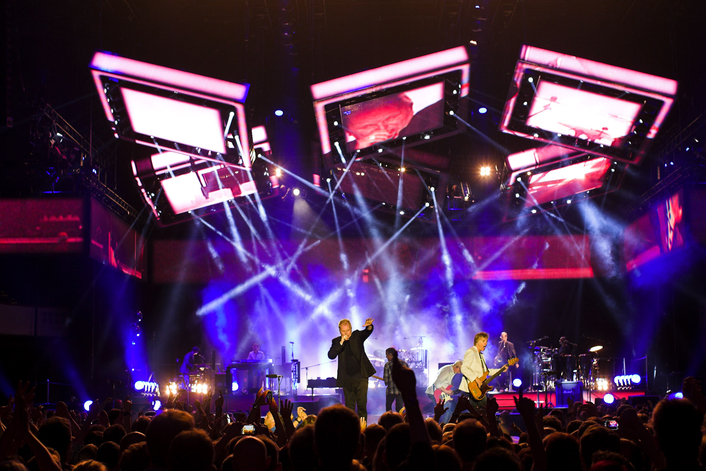 The Pointe proved to be the perfect choice, with 16 units – four per side - built into each pod.

The six pods are each 4.5 metres square. The central video surface is 3 x 3 metres, then there is a 45 cm gap and a 30 cm video surround, with the 96 x Pointes fitted into the gap between the centre LED and the border. 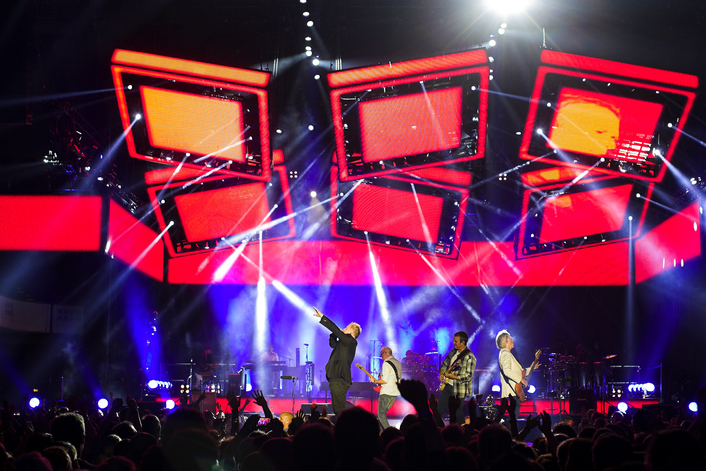 Adding nearly 100 moving lights to the stage picture as the pods start shifting position and come into play has a seismic visual impact and is a great crowd pleaser.

“We needed so much more than just a simple beam fixture,” explains Marc … “and there was really no other moving light that could fit in the very small gaps and give us the vast array of options needed”. 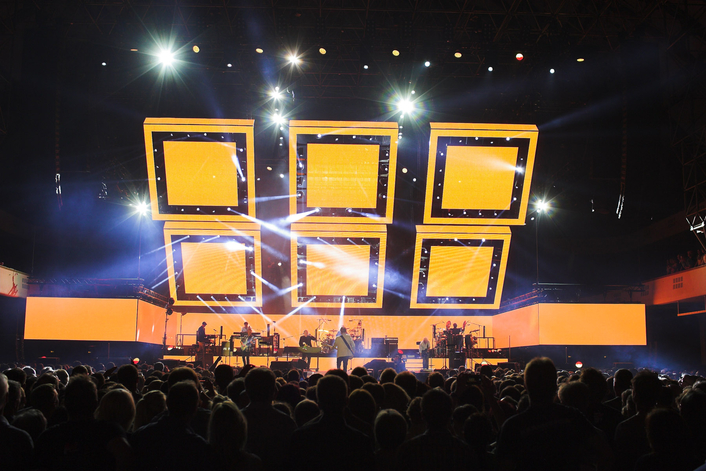 In addition to the in-air and beam effects, they have found that using the Pointes in spot mode is invaluable for lighting the band with fully functional washes and specials.

Gunter comments that the Pointes are “Extremely accurate. They return to exactly the right positions every time and replicate all the programmed features perfectly every time”. They also produce some great classic ACL beam look emulations! 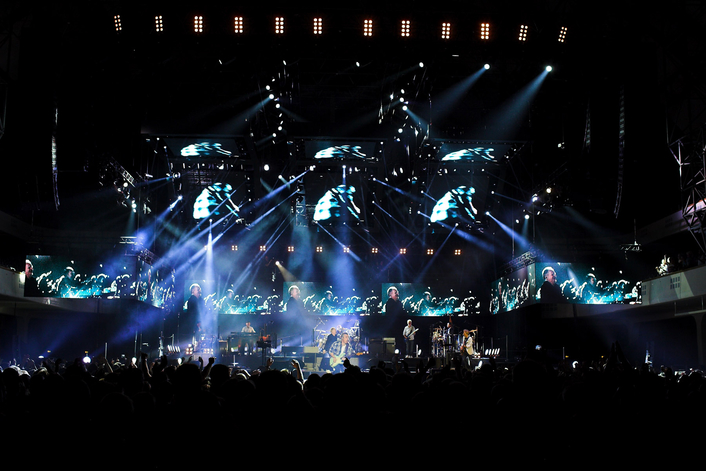 The Pointes – supplied by the tour’s lighting and video contractor PRG – were sent to Belgium based show engineering company, WIcreations, who designed and built the pods and secured the lights in place. The Pointes travel in the pods which split into two parts and pack neatly into dollies for transportation.

The Pods move into different configurations throughout the show, and with each move, the Pointes provide a fresh new layer of lighting which is completely unexpected, and helps keep the vibe moving through the two and a half hour performance. 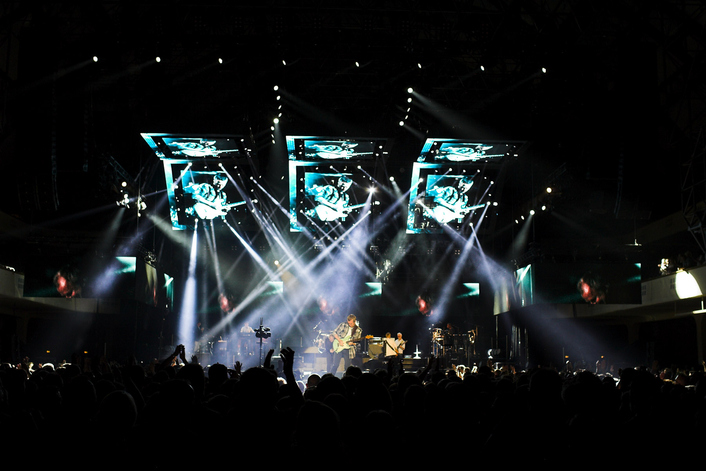 When not in use, the pods are tucked out of the way in their ‘home’ position up in the roof becoming almost invisible.

The live show sees plenty of action, with Grönemeyer drawing on his extensive back catalogue and primarily rocky sound, all delivered with great zest and enthusiasm as he plays on the great rapport he enjoys with his fans.

Gunther runs the lighting via a Hog 4 console and the automation system for the pods is a Movecat C1 system. 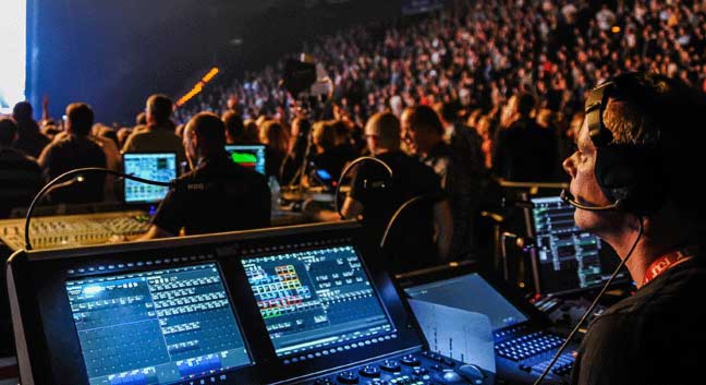 Gunther Hecker running the Grönemeyer show on a Hog 4