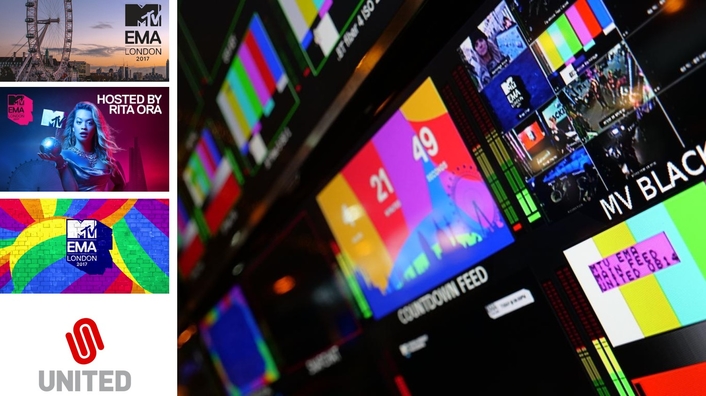 The show at the MTV Europe Music Awards (EMA) may well be the biggest music and video extravaganza in Europe. United is in charge of recording this unique event, which this year was broadcast in both HD and UHD. Time to go behind the scenes at the awards show in the SSE Arena, London.

Cheering. So much cheering. Eminem just received an award on an extraordinary, gigantic podium, and the fans are going crazy. Backstage, ten or so United staff members look on approvingly. It’s going well. Really well. Apart from one discussion about the sound being a little bit too loud, this massive recording project is going smoothly.

The MTV Europe Music Awards were first held in 1994, when (pop) stars and bands such as Mariah Carey, Bryan Adams and Take That swept the field. In terms of set-up, it was all a lot smaller then than it is now, a kind of side dish to the main course that was the American MTV awards show.

How things change: the EMA has become one of the biggest music events in the world, attracting millions of viewers and being broadcast in practically every Western country where pop music has a prominent place in popular culture.
This is the fifth time United has organised the recording and, as with every previous edition, technological innovation is a big part of the production. This time it’s 4K (also known as Ultra-HD or UHD) that’s leading the way. This higher image resolution is not new in TV land, but what is new is broadcasting live at this level of clarity. Although broadcasters in Germany and the UK are experimenting extensively with this technology, its coverage is nowhere near universal, and bringing an Ultra-HD feed live to viewers’ screens is a very different matter from regular broadcasting.

A big reason for that difference is that the EMA is not a single broadcast event. On the contrary: there is a backstage programme, a red-carpet show and the actual live presentation of the awards, all of which is interspersed with all kinds of film clips, snippets and interviews. And we haven’t even got to all the feeds for social media yet: little bits and bytes, snippets for platforms such as Snapchat and Twitter.

The heart of the operation
To make all this content available, United has installed a central hub: think of the postproduction van as the lynchpin of the show. This technical heart is full of Macbooks, monitors and other equipment to make sure the recording goes smoothly. An essential part of the project is a (really) tiny box in the middle of the van: the server. The heart of the operation. “This is where all the content comes in,” explains Wouter van Heuningen, who devised the server infrastructure. “Everything is assembled from here. The box also functions as a kind of post box: it sends all potential content to the various vans and editing suites. No one needs to carry around a USB stick or SD card to get hold of images.” 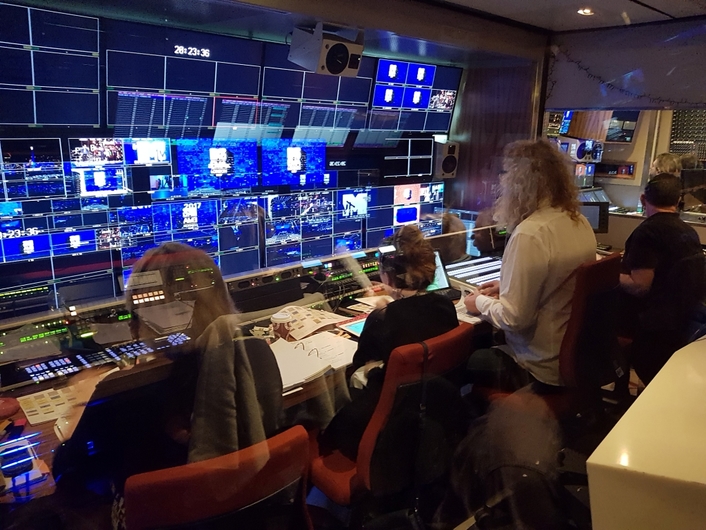 And that’s for the best, because if you think anyone could run from the recording location to the editing booth in under three minutes, you’ve got another think coming. The EMA set-up is so huge that you pass production spaces and vans in all kinds of areas around the SSE Wembley Arena in London, the location of this year’s action. It’s for good reason that some United staff members have had their bicycles flown over to the UK as a way to avoid having to walk so far. To give you an idea: there’s a good kilometre between the editing suites and the production van.

A super-fast 10GB fibre optic connection ensures that all (4K) content is available everywhere, all the time, says Rens Dijkshoorn, United’s technical manager. “We’ve built a special 4K infrastructure to account for the huge amounts of data that come with Ultra-HD.”

As early as the beginning of October, well before the show on 12 November, the team was already considering the whole technical side of the project. A sizeable task, according to Dijkshoorn. “It’s a combined show, with both 4K and HD. That’s pretty complex. You have to plan it really carefully.”

An unwitting viewer of the programme on Sky – the British broadcaster that will show the Ultra-HD version of the event – will have no idea of the complexity of this 4K live recording. That viewer will mainly notice how sharp the image of presenter and British singer Rita Ora is when she appears, as if by magic, from the set. But take a look backstage, and the sheer quantity of cables, computers, systems, displays and feeds says it all.

“In the end, what we really want is to identify exactly what the client wants,” says Bolke Burnaby-Lautier, who has the final responsibility for the EMA at United, and who can be seen as the ultimate spider in the web. “Then I just start building; the different sections at the venue have to fit together like Lego blocks.”

Burnaby-Lautier shows the venue on a kind of map, including all the cables, production vans, camera locations and equipment. The finished product is impressive. But: “We’ve done a lot of live shows like this, with lots of cameras and different locations. That’s a piece of cake for us – we’re good at it. But that’s HD. It’s no simple matter to turn that into 4K.” 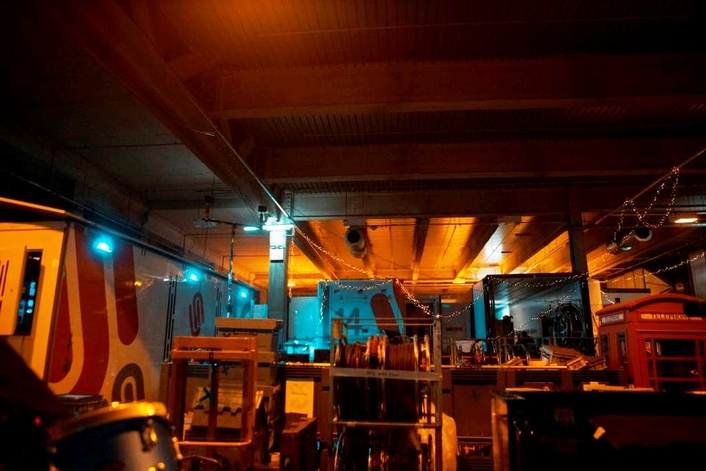 Not to mention that many different kinds of cameras will be used today, from traditional, user-friendly broadcast cameras to more cinematographically sophisticated film cameras such as the Sony F-55, to give the show a more luxurious look. “A hotchpotch,” says Yke Erkens, an expert in film cameras, with a smile. “The art is to combine the user-friendliness you get from broadcast with the look of film.”

To make sure the 4K goes smoothly, in addition to a traditional HD set-up United has also installed an extra mainframe, located outside the production van. This mainframe is mainly used to maintain as comprehensive an overview of the event as possible. “Everything in the van is done in HD, but outside it is simultaneously broadcast in 4K,” says Robin Onck, who keeps a constant eye on the UHD streams during recordings.

“That’s how the show is broadcast as everyone already knows it, but we can add a special UHD skin to that for Sky,” Burnaby-Lautier explains.

The mainframe creates an unusual corner in United’s backstage area. Surrounded by all kinds of production vans and closed in by large flat-screen TVs, this is the intersection for everyone and everything involved in the recording.

The four big displays showing all the different feeds only confirm that image: there’s Red Carpet, Backstage 1, Backstage 2, Cam 1, but also special images for Twitter or Snapchat. Burnaby-Lautier: “Make no mistake: 30 million people will watch the live broadcast, but probably another 300 million will see the digital content. That side of the work is growing.” #MTVEMA turns out to be a worldwide trending topic during the show, and with good reason.

You wouldn’t necessarily know that from the mainframe itself, though: the corner has a strange living-room feel to it, except that you know you’re definitely not just here for the fun of it. Cosy, and yet not cosy. 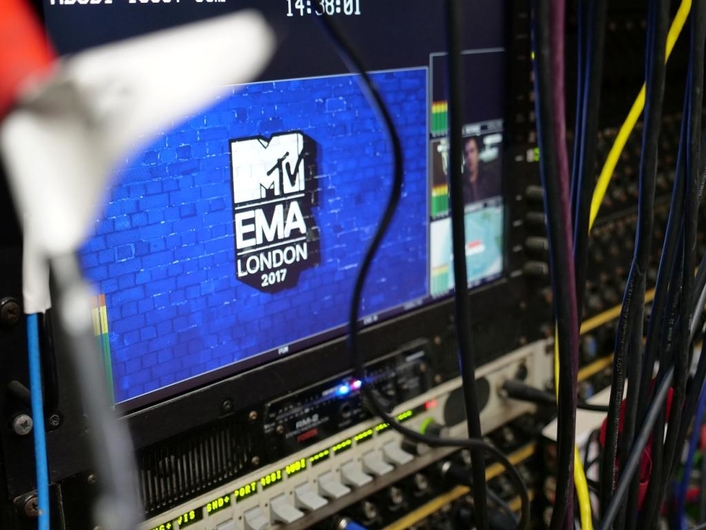 It’s actually a strange contradiction: in another part of the building The Killers are sending eight thousand fans crazy, whereas here people are having a quiet cup of tea or a Red Bull, and sucking on lollies from a big tub that’s been put down next to a gigantic screen. Christmas lights hanging above the various UHD converters (computers that transform HD images into UHD picture quality) create an intimate ambience, even though an entire UHD show is being produced at the same time.

But that sense of calm is probably United’s biggest strength. No one is easily panicked; everyone in the team knows the value of their teammates. The five (!) different WhatsApp groups Burnaby-Lautier opened to facilitate communication are evidence of that.

Whether the conversation is going on in ‘EMA17 Monitors’, ‘EMA17RedCarpet’ or ‘EMA Backstage/Digital’, solutions and ideas are suggested, questions are asked about equipment, catering and other issues, but at the same time people are making jokes – about each other, about dessert, about everything involved in a show like this. A good working environment allows for colleagues to have a laugh. But when a message is sent at 23:11 the day before the show advising people not to overdo the beer, everyone sticks to that rule – they’re serious about their work.

United madness
“You all have to have a bit of the United madness inside you to do this work,” laughs Alissa Jalink, who is responsible for logistics and cable management at the show. A lay person would probably have trouble working out what the second part of her job title involves, but given that there’s a distance of 800 metres between the backstage programme and the live show, the viewer would appreciate that there can sometimes be certain difficulties.

This time, the logistical process was mainly complicated by the venue itself: although on TV the show will look as if it’s being held in a big building, the SSE Arena is actually quite modest in size. With only one entrance for all the vans, lorries and other vehicles, construction took a day longer than anticipated.

“We build sets, only to take them down again,” Jalink says. “The key is being able to clear it all out as quickly as possible. Then we can move on to the next job.” Her travel schedule says it all: less than ten hours after the EMA, she is already on her way to Shanghai, in connection with a catwalk show for Victoria’s Secret. 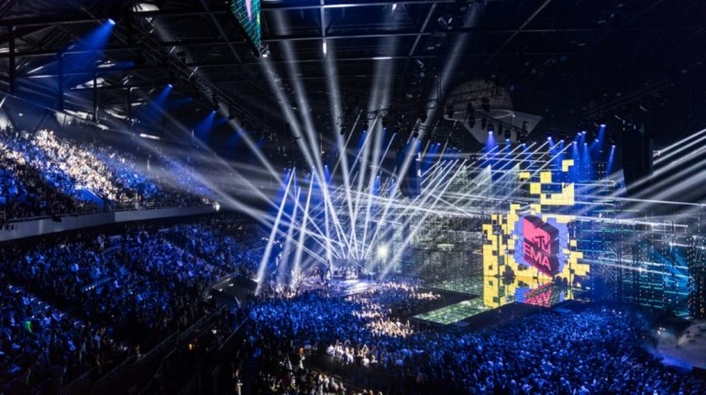 ‘Give me some love!’
Back to the live show, which is directed by Hamish Hamilton. This year, the director has brought productions such as Lady Gaga’s half-time show during the Super Bowl to screens, and he was the man behind the opening ceremony of the 2012 Olympic Games. In the production van, Hamilton gives rather loud commands to camera operators. ‘Give me some love, people,’ resounds through ‘OB14’ when the audience only gives a lukewarm response to Ed Sheeran’s award win.

Meanwhile, live editing is going on in other locations. Not only for online content, but also in connection with a special, censored live version from which any swearing can be removed. Space also has to be created to accommodate the extra ad break in the American live broadcast. All together there are 17 (!) editing sets available to make all the necessary cuts and clips.

Together with media manager Robin Klinkhamer, Wouter van Heuningen and Rens Dijkshoorn calmly watch the show in the postproduction annexe server van. Their work mostly focuses on the preparatory phase; during the broadcast itself, they are only really there to solve any problems that arise. There are none of those this time: this EMA shows that you can have complete peace of mind in handing over this kind of job to the people at United.

22:04. Rita Ora closes the show. Freedom by George Michael is heard throughout the venue. Hamish Hamilton applauds and thanks everyone within hearing, even if he or she had nothing to do with the recording. The EMA was a success; champagne bottles can be opened – but not yet for the ladies and gentlemen from United. First: the clear-up, which can take until about five o’clock in the morning, if Bolke Burnaby-Lautier is to be believed. And then? On to the next show.