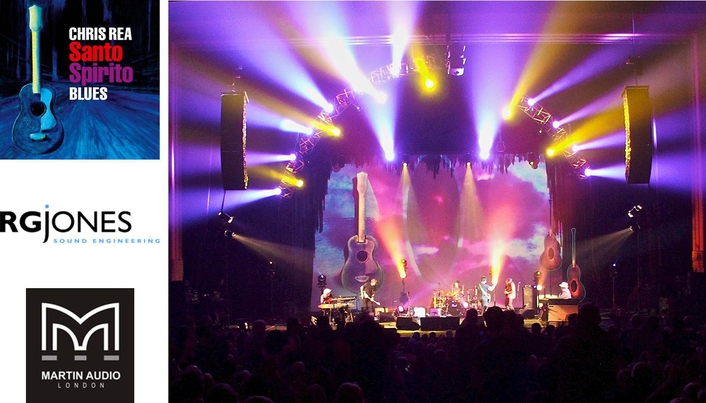 RG Jones’ Simon Honywill uses new Martin Audio array for closing tour dates, hailing its “massive impact” and physical economy
While becoming the first UK rental company to purchase Martin Audio’s MLA (Multi-cellular Loudspeaker Array), RG Jones Sound Engineering this month also found themselves in the unique position of being the first to debut the scaled down version of this groundbreaking technology in the shape of the brand new MLA Compact.

“I couldn't wait to get my hands on the new system,” admits the experienced Simon Honywill, who seized the opportunity to mix Chris Rea’s sound through the MLA Compact on the closing dates of the recent European and UK tour.

Honywill, who had largely been responsible for driving RG Jones’ investment in the MLA platform, instigated a seamless PA switch, ably assisted by system engineer Mark Edwards in time for the last two tour dates — at the Pavilions in his home town of Plymouth, and HMV Apollo Hammersmith, where the system had been formally launched last month.

Whilst the system performed admirably in Plymouth, Honywill and Edwards, along with Martin Audio R&D Director, Jason Baird, repurposed the system for the larger Hammersmith show where the impact was described by Simon Honywill as “unbelievable”.

He reported that the vocal clarity had been incredible, even at high levels, and the separation of the drums and cymbals, even in excess of 106dBA had to be heard to be believed. “The drum sound was massive,” he said, “very dynamic and very exciting.

“When you wind the system up, it just gets louder, but nothing changes in the character of the sound, which is beautiful.”

While the optimisation at Hammersmith was nothing unusual, with the balcony being notched out in the software to remove unwanted reflections, Simon Honywill explained: “Mark and Jason worked on the EQ curve and played with the sub alignment so that the system was everything I had hoped it would be.”

“In Plymouth we used a broadside array of 12 DSX subs in four cardioid cells under the stage apron, but this isn’t possible in Hammersmith so we went for a left/right cardioid stack of six subs a side and tweaked the crossover between the subs and the MLA Compact to get a really rich, smooth low end with real punch.”

Deploying a ground stack of four Martin Audio W8LM Mini Arrays under the two main PA hangs of 12 MLA Compact elements they were able to draw down the image at the front while substantially decreasing the physical profile of the stacked system.  “In the past the ground stacks have looked a little imposing with the subs and W8LC, but the ability of the system to generate seamless coverage from wherever you tell it to start and finish allowed us to get the energy we wanted into both downstairs and upstairs – the groundstacks are just to keep the sonic image down on stage for those at the front,” says Honywill.

“The system produced a fantastic impact but the overriding feeling from the production team was that the compactness of the package also offered huge benefits.”  All of which spelled further good news.

For Rea’s tour inventory is traditionally geared to fit one truck, which places enormous pressure on the truck pack. “Every night it is stacked to the roof with all the equipment,” Honywill explains  “But the appeal of a self-powered system, without separate processing and amplification, was pretty exciting.”

Having piloted Chris Rea shows for the last 15 years, Simon Honywill has historically used Martin Audio systems to reinforce the artist’s sound — generally 16 x W8LC Compact Line Arrays per side and 16 WLX subs; but for the ensemble of six musicians (including second guitar, two keyboards and drums) this time around, they knew they had considerably raised the sonic bar. Simon’s overall verdict? “MLA is vastly superior to anything on the market and this system provides a great neutral platform to mix on.

“Although RG Jones has bought the big system, which was a no-brainer considering the profile of the company’s expanding client base, the MLA Compact has to be a serious proposition. It’s brilliantly conceived and brilliantly delivered — a completely revolutionary product and other manufacturers should be asking themselves how they are going to counter that.”