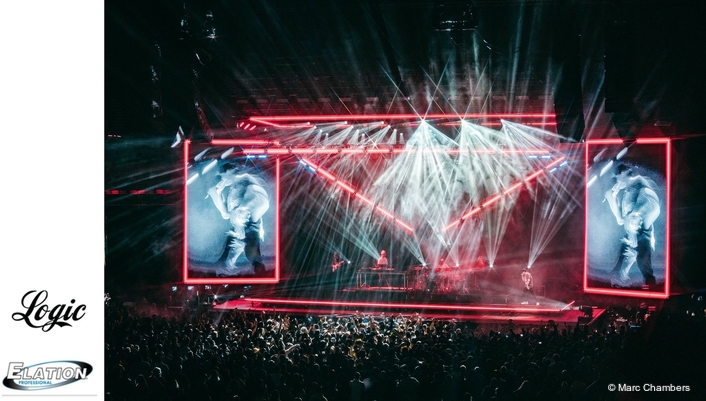 American rapper Logic toured 26 cities across North America this fall on his “The Confessions of a Dangerous Mind Tour” with lighting design by Mitchell Schellenger and lighting supply by Volt Lites of Burbank, California. Schellenger employed a rig of Elation Professional Artiste Monet™ moving heads as the workhorse fixture in his design and says the powerful, multi-purpose LED profile was just what he was looking for.

Logic is a multi-platinum selling, Grammy nominated artist whose positive message has endeared him to an ever-growing fan base. Perhaps best known for his six-time Platinum single 1-800-273-8255, which spotlights mental health and suicide prevention awareness, he released a new album “Confessions of a Dangerous Mind” in May, which debuted at number one on the US Billboard 200. 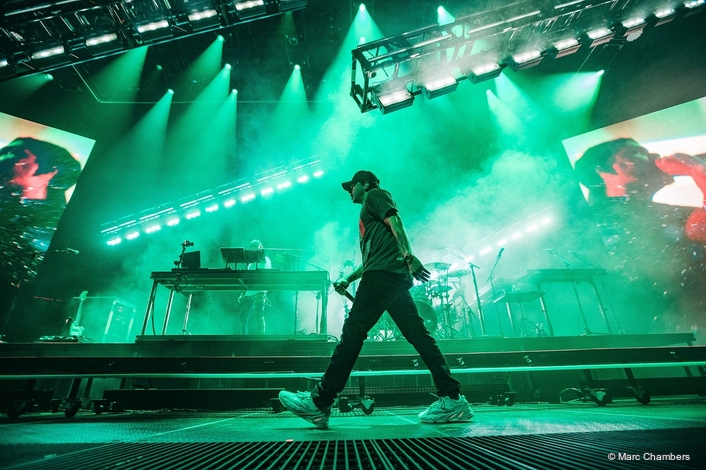 Seeking a fresh look for the artist’s on-stage performances, Logic’s manager contacted Schellenger after seeing an Imagine Dragons performance and liking what he saw. Schellenger has designed lighting for Imagine Dragons since 2018. That led to Schellenger putting a festival rig together for Logic earlier this year, something he describes as easy that could move around, “almost a one-off style rig,” he said. “Then we took those ideas from the festival show and built it into a full blown arena tour.”

That festival rig featured sets of parallel, automated trusses, a component that Logic liked that Schellenger built the rest of the arena show around. “We wanted to keep the look clean with few fixture types in the air,” he explains, “so we chose to use one fixture above the stage and that’s where the Monet came into play.”

Perfect sense
Schellenger had visited the Volt Lites shop in LA to demo the Monet and found the fixture’s multiple capabilities to his liking. “I didn’t want to use the typical wash, profile, beam configuration,” he says. “I wanted this to be a simplified look and by doing so I needed a fixture that was capable of doing a lot of things with the power and capacity to light the entire show from above. The Monet just made perfect sense.” 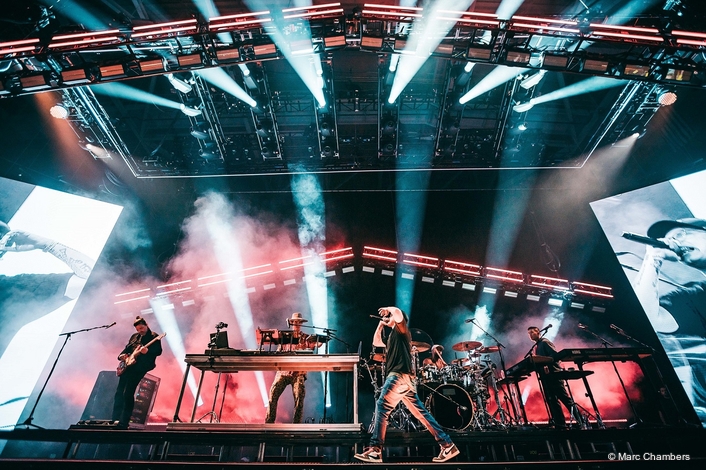 What first caught his eye however was the moving head’s design itself. He comments: “It’s a proportionate fixture. The housing is really clean and modern looking, which is something that I personally take into consideration because even when a fixture isn’t being used there’s still ambient light that’s catching it and you can still see its silhouette. I knew there would be times with Logic when we were lighting a song with just the floor lights and you’d still be able to see the Monets up in the rig. Having a nice shape to the moving light was important.” 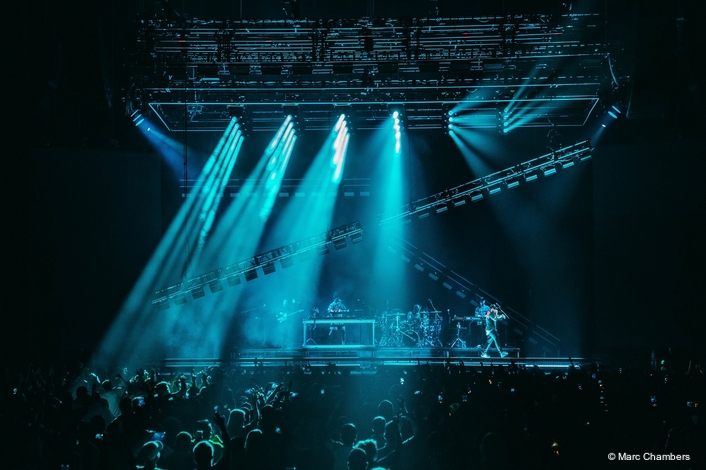 When the designer turned the unit on, both the output and evenness of light made an immediate impression. “Although it was incredibly punchy, there was no hot spot,” he said. “We put it up against some other fixtures and it was uniform and bright. As a white LED source, when using it in open white it has a pure white color. If you didn’t know that it was LED, there’s no way to tell.”

He then started incorporating colors using the fixture’s SpectraColor CMYRGB color mixing system, along with CTO color correction and color wheel. “When we started integrating the colors, you can get so much saturation out of them and still maintain punchiness. We dropped Congo into it and it was still bright, which other fixtures have trouble with. Knowing that this fixture had to be my primary source of light, that was key in the decision to use them.” As the designer continued to play with the fixture, he took notice of the gobo selection, which he describes as “beautiful, sharp, clean and modern.”

“The Confessions of a Dangerous Mind”
On the Logic show, an overhead rectangular rig holds 24 Artiste Monets in six rows of four fixtures each. Across the backline and lined up with the six overhead finger trusses are six more Monet fixtures used for aerial effects and to shape the band. Running perpendicular to the Monet truss fingers are four automated finger trusses, which at times disappear completely to leave the Monet fixtures alone. 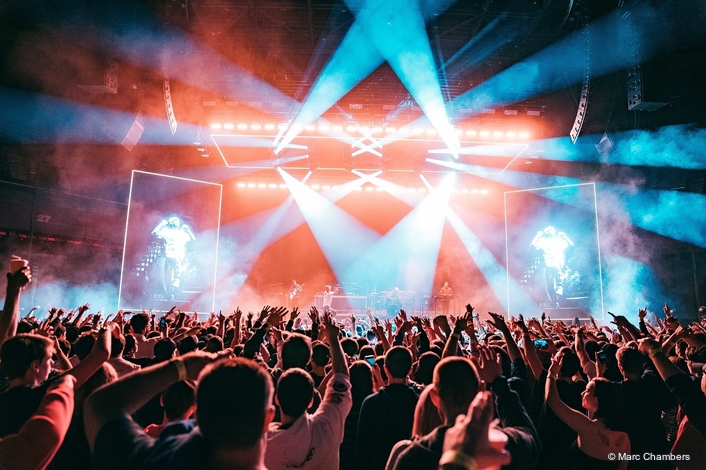 Despite the large arena settings, Logic wanted the show to have an intimate feel so Schellenger abstained from LED video graphics and used IMAG with a supporting light show. While two monolithic screens (each 15ft wide by 32 ft tall) project live images of the artist, the upstage center is left intentionally void. Schellenger explains:  “I didn’t want the IMAG upstage center because having a big LED surface on for 100% of the show wouldn’t allow the beams to have their moment. Even though the IMAG is on all the time it is so far off stage that you always see beams of light and the automation moving. The upstage center is literally a hole of negative space that gives us big real estate for the light show.” In addition, because the show relied heavily on IMAG it was important that the lights played nicely with the camera, which, according to Schellenger, they did.

The designer also placed a Monet fixture at each downstage edge of the stage for sidelight, a position that he typically would use two fixtures to get the intensity he wants. “This was the first time I’ve ever done a show with a single fixture downstage left and downstage right and it was more than enough,” he said. “We could zoom them wide to get the full shot then shutter them down with the framing system so we weren’t blowing out the video wall.” Lighting programming was by Manny Conde with Sarah Parker handling lighting direction on tour. 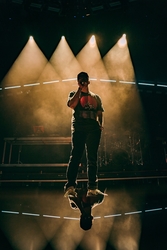 Logic, who performs with a 4-piece band behind him, doesn’t put on a typical rap show from both a lyrical and a performance sense. Not only does he emphasize peace, love and positivity, there are slower, more intimate moments in the show, for example, where he stands at a single mic center stage. For these looks, Schellenger hits the artist from behind with the Monets in what he calls a Sinatra-looking song but with a modern twist. “He was receptive to having those types of moments in the show because it keeps the show dynamic and gives us the chance visually to play off the dynamic,” he says. “It was a great tour to be a part of and fun for us from a creative standpoint.”