The multi-deck layered stage was designed by leading Bollywood set designer Varsha Jain, and this, the MILOS roof system, all trussing, rigging and assorted scaffolding and structures utilised on site were supplied by Chennai based ‘Men At Work Stagecraft Management Pvt Ltd’. The project was managed for them by Mankaran Singh.

The MILOS roof system measured 24 metres wide by 18 metres deep with 13 metres of headroom. Various trusses were sub hung from its mother-grid, including six straight ones of different lengths and four circular - one at 8 metres, one at 4 metres and two 6 metre diameters. 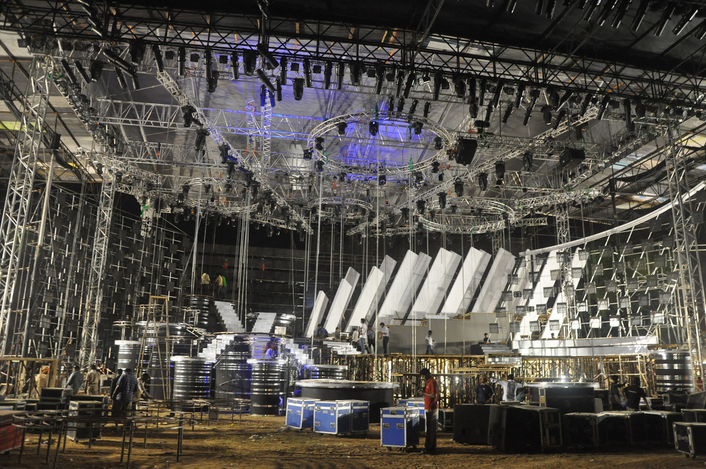 The stage’s multiple deck levels were accessed via a series of scissor and mechanical stage lifts also delivered by Men At Work.

Around seven tonnes of equipment had to be flown in the MR5 roof including a large lighting rig designed by top LD Becket Joseph Tundatil. This featured nearly 200 moving lights, strobes, LED battens, over 300 PAR cans and two Barco high powered projectors.

The event and AR Rahman’s production company had insisted on having a MILOS roof system for the show as they wanted a named brand recognised for its strength and reliability.

This followed an incident a couple of years back when they were touring in the US and the ground support system they were using collapsed!

“The MILOS roof ticked all the boxes,” he confirmed… adding that they were one of only two companies in the whole of India able to offer a fully certified and proper outdoor roofing solution.

Men At Work Stagecraft Management invested in its MILOS roof in 2012, following extensive talks with MILOS and a long period of researching the globally available options.

“We chose MILOS because no other manufacturer could match their pricing, quality and after-sales support,” states Singh.

Before making the purchase, Singh and his team were invited to the MILOS Guangzhou manufacturing facility in China to evaluate the products and the company’s production capabilities. “We were hugely impressed,” says Singh.

He thinks that the best features of the MR5 roofing system are the quality of the trussing together with the modular design of the roof and the speed at which it can be erected by a skilled crew. “We have owned other trussing in the past so we can easily tell the difference.”

The structure’s ability to withstand reasonable wind speeds (up to 90 kmph in this case) is another massive advantage he says.

The AR Rahman event in Chennai was the first time they had used the new roofing system in its entirety, but prior to this they used the ground support system for several other prominent events like the South Indian Filmfare Awards in Chennai’s Nehru Stadium. 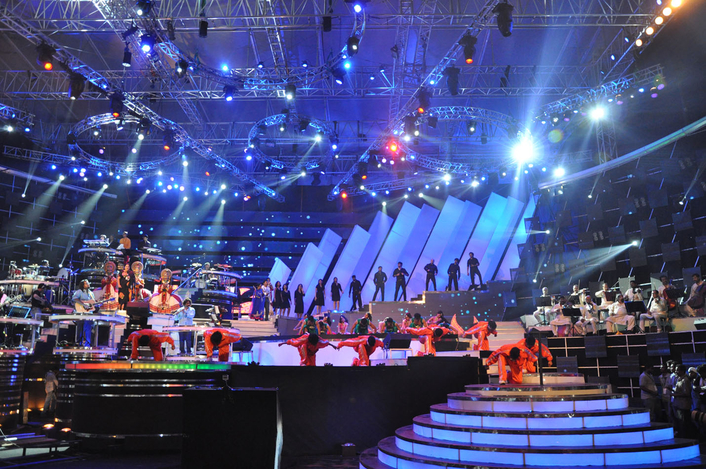 Here they collaborated closely in the build process with the choreographers and installed flying harnesses for three aerial performers and also rigged a winch to fly a scenic moon – all on the MILOS ground support.

Men At Work are pleased with their investment. Having MILOS on-board puts them into a completely different league of staging company and helps enable them to continue delivering the very best standards of excellence to their clients.