Miley Cyrus performs part of her Bangerz Tour at the Toyota Center on March 16, 2014 in Houston, Texas
Miley Cyrus is currently on tour with her fourth and definitely most controversial album to date, Bangerz. Having comprehensively ditched the Disney image of her teenage years – although not the purity of her voice which is dominant all the way through the album – Bangerz exhibits influences that shift dramatically between pop, hip-hop, funk, country, R&B and dance.

The tour is equally eclectic and outrageous, featuring a giant hot dog, a troupe of dancing furry animals and cartoon characters, foam fingers and some very skimpy costumes amongst other things. High-energy and steeped in self-mockery, there is never a dull moment. Critics have been largely very positive, appreciating her vocal performance, audacity and charisma, with one critic from Time magazine calling her one of the “most dynamic performers of her generation”. On this tour, and for the first time, Cyrus is performing with the new Digital 9000 microphone system from Sennheiser.

Despite the change of image and musical direction of recent years, Cyrus has remained faithful to key members of her technical team, in particular monitor engineer Vish Wadi and FoH engineer Paul David Hager. Both have been working with Cyrus (and Sennheiser) for a number of years. Wadi’s relationship with Sennheiser goes back some 17 years, whilst Hager has been working with Sennheiser since he engineered the Goo Goo Dolls tour in 2005.

“Miley had been using an SKM 5200 handheld transmitter with a 5235 capsule which was a great combination for her – very robust, sounded good etc. – but Paul [Hager] and I were really keen to try out the digital system,” explained Wadi. “When we did, we both fell in love with the sound quality and the innovative RF capabilities, so we decided to move Miley over to the Digital 9000 system for this tour. She is using an SKM 9000 handheld transmitter with the MD 9235 capsule, and it sounds fantastic!” 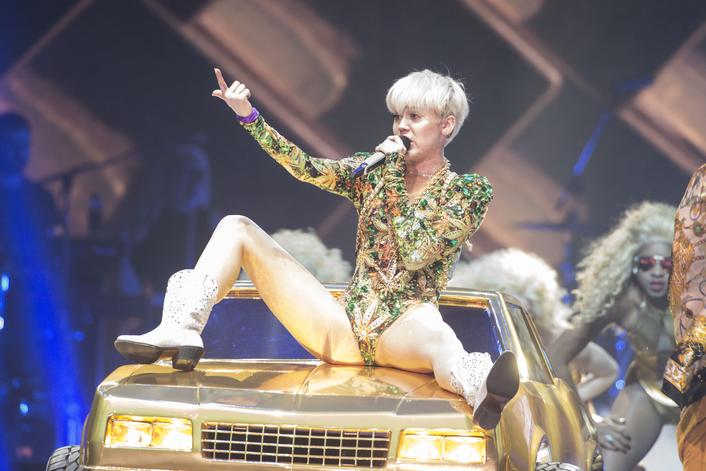 Wadi noted that FoH engineer Paul David Hager was a significant driving force of the desire to move over to digital. “If anything, it was even more important for him than it was for me because Paul is using digital outputs, and therefore wanted a fully digital workflow, whereas I am using analogue outputs because I think it works better for monitors, especially in-ears. That said, there has definitely been an overall improvement in sound quality, and the other major bonus is that it just makes life so much easier for all of us in terms of setup and operation. The frequency scanner is a real time-saver and once you’ve understood how it all works, it’s just a dream to work with.” 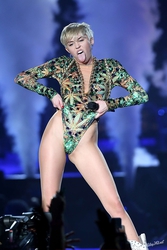 Hager is in complete agreement, and made particular reference to the Digital 9000’s unique, completely uncompressed digital transmission. “The difference in sound quality is measurable,” he said. “The wireless sounds much more natural without all the companding that was previously a feature of wireless systems. As a result, the 9000 doesn’t have that typical “wireless mic” sound – in fact, it almost sounds just like a cabled mic. Also, it can handle great distances without dropout, which for a major tour like Miley, where we’re in huge venues with massive stages, is a significant plus point. The other feature I love is the choice of AES outs right into my console for the cleanest possible signal chain – no messing around with any extraneous signal converters, it’s just direct from mic to console.”

“It’s also simplified things for me in terms of workflow,” continued Hager. “The fact that Miley and her background singers now sound so much more natural than before means that I don’t have to EQ nearly as much. The other thing that I love is having a range of heads for the mic so that I can find the right one for her voice. The downside is that we’re now spoiled for anything else – having used the Digital 9000, it’s going to be hard to go back to any other wireless system!”

Both engineers have been working with Sennheiser for some time, but Wadi in particular has enjoyed a long and productive relationship with the company. “My first contact with Sennheiser was in 1997 when I was trying to find a mic for Mariah [Carey],” he recalls. I came across the 5000 Series and talked to Greg Beebe [now President of SEC, the wholly-owned US subsidiary of Sennheiser]. He sorted me out for Mariah, and we became friends. Some years later, I needed a mic for Sting, and again, Sennheiser was the only company that really reacted and cooperated with me to develop the product I was looking for. In fact, the e 835 dynamic cardioid mic was a direct result of that project. Since then, I’ve been involved in road-testing new gear and giving feedback whenever I can.” 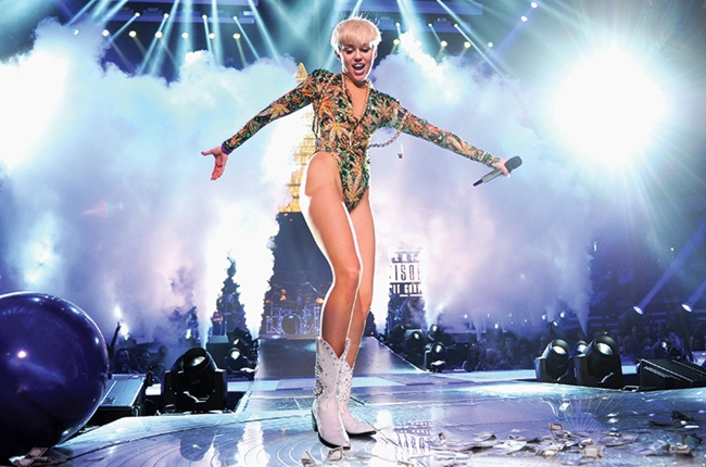 “I think Sennheiser is a great company because despite their size and prominence in the market, they are still a family-run company, and those “family values” are definitely a defining factor in the attitudes of their workforce. You get an incredibly personal service wherever you are in the world which is enormously reassuring, and from a technical and developmental point of view, they are always a step ahead of the crowd. The result is that you get to deal with great people AND great products. What could be better than that?”