Three-time and reigning Male Vocalist of the Year at the ACM Awards, Jason Aldean, is currently on tour across America, having completed the Australian leg, with his We Were Here tour, named after his single Gonna Know We Were Here.

Lighting designer, Mike Swinford, of UpLate Design Inc, was intent on bringing a fresh new look to the country singer’s headline tour, using modern technology and new lighting tools to achieve an inspirational design that would be very different from what Aldean was accustomed to. Included in his design are a plethora of lighting fixtures from Ayrton that include MagicDot™-R, MagicRing™-R9, IntelliPix™-R and the award-winning MagicBlade™-R.

“We wanted a departure from the very large ‘rock’ lighting look that we had last year,” explains Swinford. “We started the current tour with a new set based upon many diamond shapes, with diamond-shaped video screens upstage, V-shaped stair treads and thrust tips, and five square lighting pods on Whirligigs which can be twisted into diamond shapes above the artists. To add to this cutting-edge look, we wanted a different style of lighting fixture that would really pop. Ayrton was a good place to look as the company produces unique lighting equipment that looks totally different from any others. What we ended up with was a veritable Ayrton showcase!” 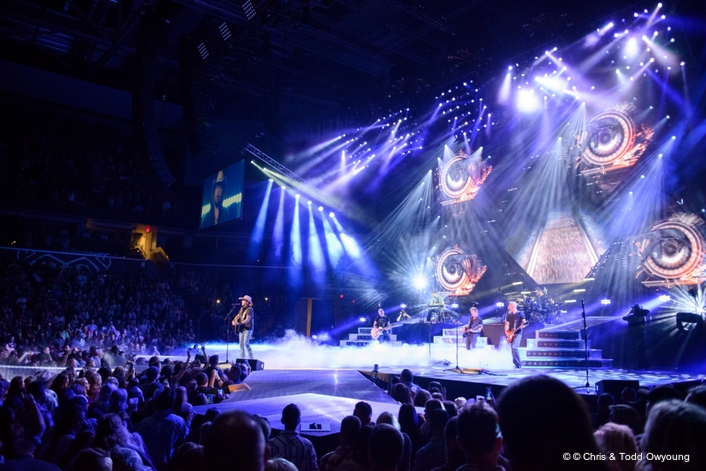 Swinford is very familiar with Ayrton having been one of the first lighting designers in the USA to tour with MagicPanel™ 602 fixtures with Florida Georgia Line in 2013. “We had seen the MagicPanel™602 demo video online at first, but when we saw it in rehearsals we were totally floored by it! It also proved extremely reliable and robust so, despite having no direct experience with them, we decided to try the MagicBlade™-R and MagicDot™-R for Aldean’s tour,” he says. 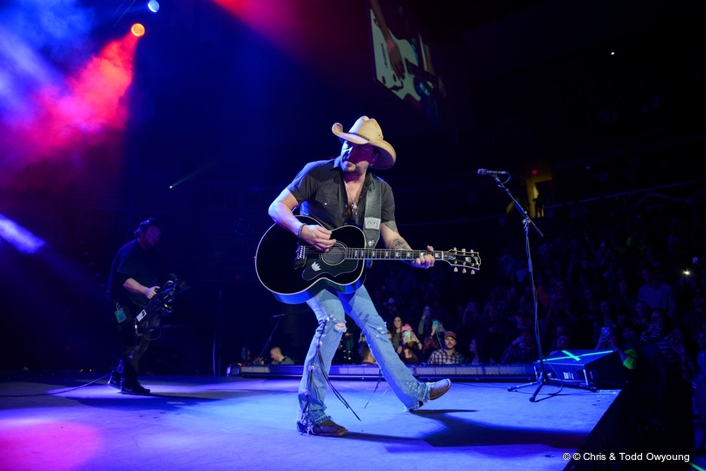 “We took the five diamond video screens upstage and decided to add a surround accent around the large central screen. We chose 40 MagicBlade-R fixtures to delineate its outline and create a border. We then use the smooth pan and tilt movement to modulate the shape of the borders during the songs, change the angles of the Blades to create geometric patterns, and use the individual emitters to texture the ‘face’ of the fixtures. At other times, we run some very geometric video content through them, designed by creative designer Raj Kapoor, to make use of the lighting portion of the wall, each time altering the appearance of the border. It’s turned out really well.” 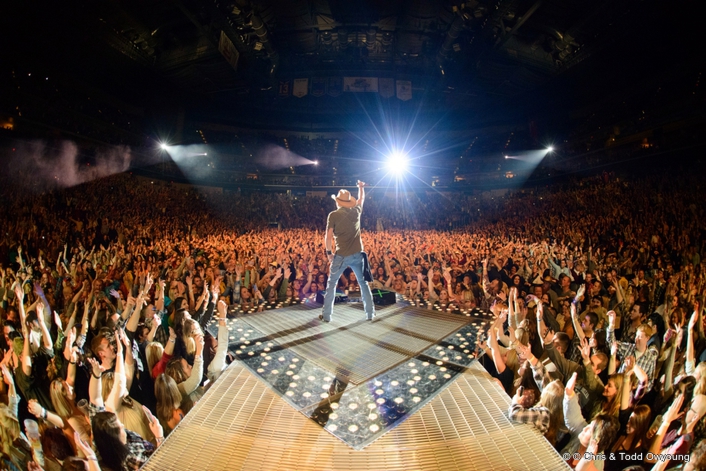 “The line of MagicBlades around the screen is really cool and something very different, especially for a country artist,” agrees Swinford’s programmer, Mark Butts. “We use them as edge lighting, as a frame for the video screen and as straight effects. They are versatile and unique fixtures that lend themselves well to the diamond shape of the screen.” 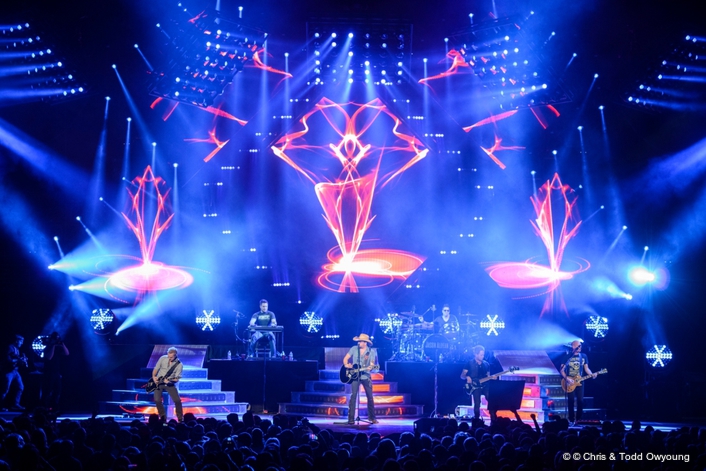 The five overhead lighting pods provide the most dynamic element of the show. Each is formed of 36 MagicDot™-R fixtures (180 in total) arranged in a 6 x 6 matrix and rigged on Show Rig Whirligigs. These Whirligigs move vertically up and down, track up and down stage, and rotate 360° to give movement across the full X, Y and Z axes. The pods are deployed directly above the stage and obliquely at different angles, sometimes right down almost to stage level, and at one point form a wall behind the band as they perform on the forestage. “The pods give us an infinite number of very dynamic, versatile looks which we change for each song and sometimes in the middle of numbers,” says Swinford. 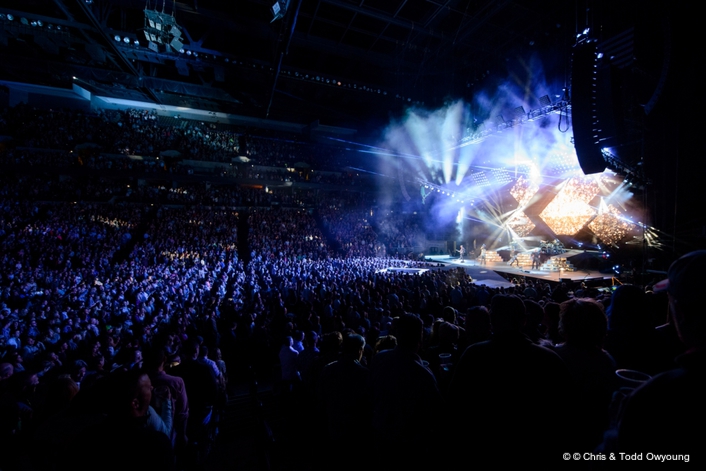 “The MagicDots are programmed in banks to produce formations of sweeps and rolls,” says Butts. “Having a big array of fixtures lends itself to almost limitless combinations of colours and shapes. I make extensive use of the Grand MA2 layout views and the effects to create complex selections and looks.”

This is the first time Swinford has used MagicDot-R and, as a result, elected to use them on the NBA All Star game in Toronto. 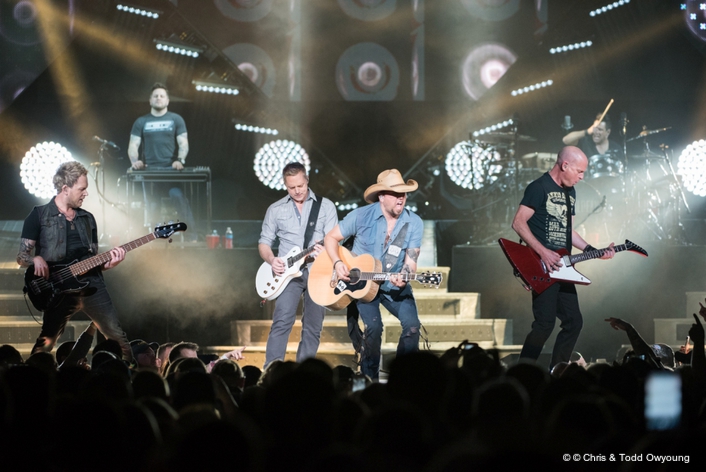 Ten of Ayrton’s giants, the MagicRing™-R9, line the upstage runway behind the band where the large faces of the fixtures are perfect for presenting graphics and creating bold beam strokes. “We were looking for something big and bold with a great output to use as a floor accent light,” says Swinford “The MagicRing-R9 just had to be tried. They are very powerful beasts and really very nice. We have great fun with them - I just wish they had a zoom on them!” 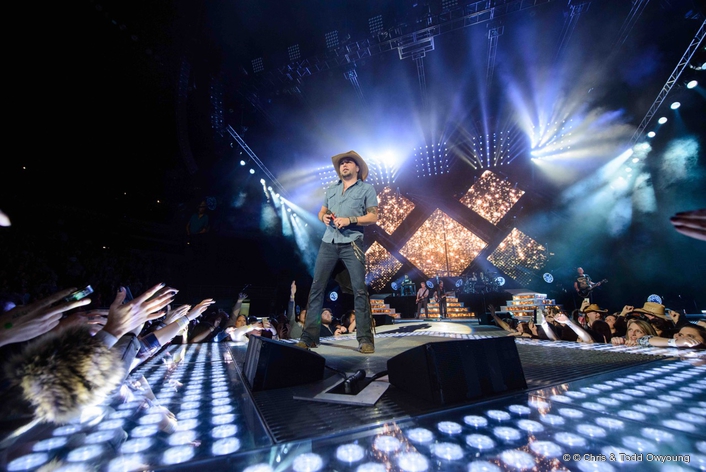 Finally 24 Ayrton IntelliPix-R panels are embedded around the perimeter of the front thrust stage, providing an illuminated focal point in close proximity with the audience, with Aldean in the centre surrounded by light. 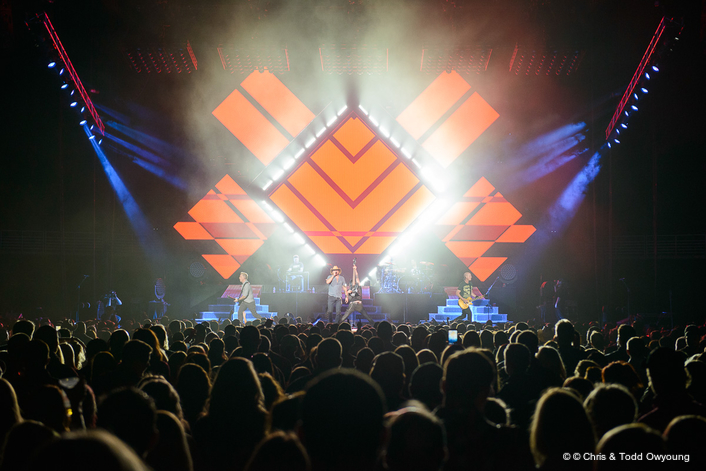 Swinford and Butts, spent two weeks in pre-viz programming the show before rehearsals. “Using a pre-viz system gave us a great leg up on the production,” says Butts. “Because of the tight production schedule, which started on Jan 1, had limited rehearsals onsite, we needed to be prepared walking into rehearsals. It also gave us time to step back, and think differently about our approach this year. Working with lighting director, Keith Hoagland, was a huge help; he is intimately involved with Jason’s tour, and a huge resource. We split the programming between us, each handling a different part of the rig, and working with him was really key to getting it done.”

Our goal this year was to change it up,” says Swinford, “which we did by adding a lot of automation - in the pods and the Ayrton lighting fixtures - which morphs the entire design for different songs and creates different moods throughout. As a result, the number of traditional lights we use – just 60 - is significantly lower than usual.

“Ayrton designs products that are truly innovative. They have taken a different direction from other manufacturers and produced more stylised and unique instruments that really don’t look like anybody else’s.

“They are very robust and very tour-friendly, and they hold up well. For fixtures that have a continuous pan and tilt and do so many spins, they come back to home with such amazing accuracy, which is very important. You just have to look at an Ayrton fixture and you know that it’s a well-made product.”

Jason Aldean’s We Were Here tour crossed to Australia for the first time this March before continuing throughout America until the Autumn. The lighting equipment for the tour was supplied by Bandit Lites of Nashville. Ayrton is distributed exclusively in the US by Morpheus Lights