MediaCorp Defines the Languages of Communications 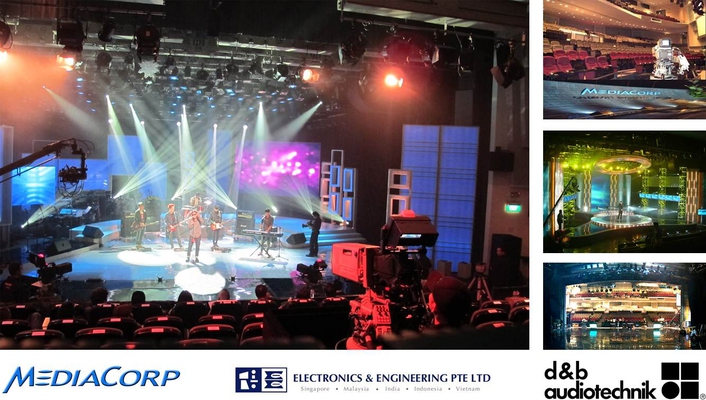 The installed system comprises the installation versions of the Q-Series loudspeakers with a Qi10 centre array
A very conventional TV theatre at the home of Singapore's leading broadcaster MediaCorp, was looking for a slightly unconventional sound system. "MediaCorp's audio team headed by Mr Sherman Lee (Senior Manager, Sound), stated very clearly from the start the objectives they would like to achieve," Kenny Chng of d&b audiotechnik S.E. Asia explained: so far, so conventional. "The TV theatre is capable of housing an audience of eight hundred. The team's desire was for a more direct frontal coverage from a front of house PA as compared to the pre-existing 'top down' dispersion."

Not so revolutionary in contemporary broadcasting, but there was one final codicil, "The type of shows held in the TV theatre cover an enormous range, from music competition, prime time entertainment variety shows, to festival celebrations such as Singapore Idol, New Year's Eve special, Chinese New Year and Hari Raya Celebrations, just to name a few. Plus the majority of shows are presented in four languages English, Chinese, Malay and Tamil."

"Mr Sherman Lee approached several vendors including d&b audiotechnik S.E. Asia Pte Ltd to discuss their plans in late 2010," continued Kenny Chng, "We then presented them with two demo systems; d&b audiotechnik T10 loudspeakers with ground stacked Q-SUBs and as an alternative, Q10s also with ground stacked Q-SUBs. They had the opportunity to conduct live listening tests over a number of shows; the studio's principal sound man Peter Tan worked alongside Mr Sherman Lee for these tests.

"After listening to the d&b Q and T-Series systems demonstrated in the studio several times we found the Q-Series system design proposed by Kenny Chng best fitted our specific needs," said Peter Tan. "Putting a 'front on' rather than an 'overhead' PA system into a studio demands very precise positioning and excellent pattern control behaviour across the full frequency range. Delivery also needed to be at sound levels remarkably higher than is usual in a TV studio. All of these things have been achieved without compromising the broadcast sound so we are very pleased."

"From the events where we set up our demo PA systems," continued Kenny Chng, "we were able to build a more permanent system design that addressed the TV theatre's applications, as well as the audio engineer's concerns such as coverage and SPL." The installed system comprises the installation versions of the Q-Series loudspeakers, namely Qi10s left and right, with a Qi10 centre array as well as Qi10s for left and right fills. The studio out fills are Qi7 whilst the Qi-SUBs are floor standing. The whole system is driven by d&b D12 amplifiers and configured (wirelessly) using the d&b R70 Ethernet to CAN interface.

The studio received a full technical makeover during this period, the principal contract being the responsibility of Electronics and Engineering (E&E) Pte Ltd who physically installed the PA with Soon Chee Boon being the supervising engineer. Kenny Chng and his team from d&b audiotechnik S.E. Asia defined the loudspeaker configuration and signal routing and completed the tuning and commissioning in September 2011.

Mr Sherman Lee was clear in his conclusion, "MediaCorp has upgraded its sound system in this TV theatre to a d&b sound system that delivers an 'in-studio' experience to the audience, similar to that of a theatre or concert hall, yet without interfering with the capture of the sound for TV broadcast. That requires a delicate balance which was achieved through the great cooperation between the broadcaster's Production Resource team and the teams from d&b audiotechnik S.E. Asia and E&E.”