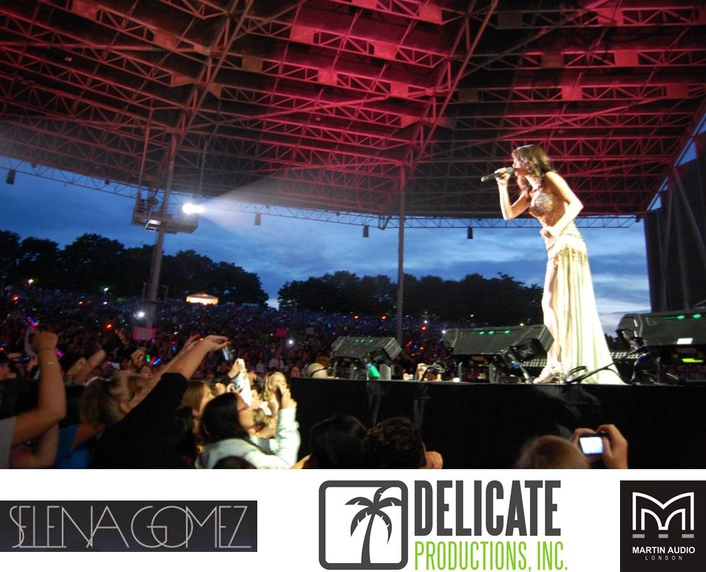 The actual MLA system consisted of 11 MLA enclosures, one MLD Downfill, six MLX subs per side and Display 2.0 software
Selena Gomez recently completed a successful US tour of 25 cities. The production required a cost-effective sound system with a small footprint that had to deliver uniform coverage and exceptional sound quality in a wide variety of venues.

As FOH engineer Jason Moore explained when asked about the criteria for the PA, “We were looking for the best possible sound we could get in a small, powerful package that would allow us to find a happy medium between amphitheatres, theatres and arenas.”

Production manager, Javier Alcaraz, said that, “Delicate Productions, one of the companies competing to provide audio for the tour, had asked me to listen to the Martin Audio MLA system. So I went to a demo in North Carolina where I listened to MLA and was floored. I called Jason and told him, ‘I think this is the rig for you, where we are, and what we need to do with the tour.’”

Initially drawn to another system, Moore says, “Javier really opened my eyes to what MLA could do in terms of controlling the sound, a key factor in theatres with balconies and sheds with aluminum roofs and other kinds of problems.

As it turned out, the MLA system we were looking at could perform the way we needed it to, no matter what type of venue. Plus I was pleasantly surprised with the rig. I’d never been on the MLA before, but it wound up exceeding my expectations.”

According to Javier, size was also a factor: “For the tour, they gave me three production semis for all the sound, video, production, backline –– everything. And with the rig coming in as small as it did in the truck (the footprint was ridiculously tiny) that was a big help.” 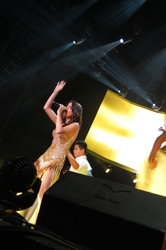 As compact as the system was, there weren’t any problems in terms of getting the levels they needed. As Moore puts it, “It was fine for the decibel level I need with this artist and demographic. I ran 102dB to 104dB peak with no problems whatsoever.”

Even more critical was the MLA system’s ability to put the sound exactly where it had to be: “The most helpful thing for us was the ‘Hard Avoid’ function in the software that really helped us focus the PA where we needed it,” says Jason. “A number of times Javier and I would walk around the room during the opening acts and be amazed at the coverage and the fact that there were so few reflections. We’re all used to doing amphitheatres and we all know what they sound like, but the MLA sounded different than anything we’d ever heard before.

“The ability to control the sound so precisely was a huge advantage,” Jason adds. “The box threw so far that in some of the amphitheatres, our system tech Brennan Houser would tune the rig and turn off the delays. We didn’t use delays in close to 60% of the sheds because the MLA boxes threw so far and sounded so much better. Brennan would direct the sound off the shed, taper it up the amphitheatre, focus it out of the gap between the shed and the last row of seats, and it would make it every time.”

Javier adds, “I was back at monitors and there were so many shows where I’d have to take my ears out just to hear if the PA was even on because the rejection off the back of the box was truly unbelievable. The first few days of rehearsal, I pulled up the mix I’d been on for months and have to completely rework it. You can’t hear the MLA system at all.”

The tour included two opening acts geared to Gomez’ fan base –– Christina Grimmie and Allstar Weekend –– in addition to Selena and her band, The Scene, which consisted of a keyboard player, drummer, bass player, guitarist/musical director and two background singers.

As Moore enthuses, “This tour was really efficient and awesome considering the budget. All of the stars came into alignment for this considering the PA and crew and how well we all got along. We had a really nice asymmetrical lighting and video package and minimal staging which was very effective … plus a small but effective PA system that sounded really good.”

Buoyed by their last experience, Alcaraz and Moore will soon be embarking on a Canadian tour with Gomez that encompasses 12 cities and includes four more MLA enclosures and three more MLX subs a side.

Asked about the client’s reaction to the MLA system, Alcaraz concludes, “We’re happy and so is the label. Everyone has had some really nice things to say about how good it sounded. As far as audio goes, the feedback has been very positive.”