Ask FOH engineer Jim Ebdon about the configuration of the L-Acoustics line array sound system he’s been piloting for three-time Grammy Award winners Maroon 5 for nearly the last two years on a world tour and he’ll likely reply starting with the phrase, “Well, currently, at the moment…” That’s because in that time—during what’s been billed alternately as the Maroon V Tour or the M5OnTheRoad, which has so far passed through North America, Europe, Africa, Asia, Oceania and South America—Ebdon has been tweaking the arrangement of the K1/K2 system’s components, finding little tricks that are making an already great-sounding system perform even better.

Ebdon and the band began the tour back in February 2015. At the time, Ebdon, who has also mixed front-of-house sound for Aerosmith, Annie Lennox and Matchbox Twenty, discovered that the L-Acoustics V-DOSC system that he had come to count on wasn’t available. “The V-DOSC was simply still so popular that one wasn’t always available—bands and production managers loved it,” he recalls, his native London accent mellowed by 15 years living in Los Angeles. “That first six months on the road [without L-Acoustics] was ‘an interesting experiment,’” he says with understated discretion.

That summer, however, a K1/K2 system did become available, through Sound Image, which has been the tour’s main SR vendor throughout. That began a Lego-like puzzle, with Ebdon and a series of system technicians trying out various configurations that changed over time. The system started with two hangs of 10 K1 per side with four to six K2 boxes slung underneath, depending on the size of the venue.

Most recently, the main arrays consist of 14 K1s per side with two K2s underneath, always powered and processed with LA8-equipped LA-RAKs. In addition, there are 12 K2s per side used as side fills, 10 Kara boxes flown as rear fills for arenas and stadiums, and six Kiva speakers per side for front fills.

The low end has usually been handled using 10 SB28 subs ground stacked; however, Ebdon has recently taken to hanging additional K1-SB subs alongside the K1 hangs. “I used to think that would create too much bass in the roof when we put them on the top of the arrays,” he explains. “But, on the sides, they really seemed to add a dimension. We started trying that on the South American leg of the tour. After we’d done a few shows like that, we left them off for a show and that’s when we realized that we really missed them. So now they’re part of the design.”

The K2s in particular have amazed their users on the tour. For instance, lead vocalist (and The Voice star) Adam Levine spends much of the show traversing a 130-foot-long stage thrust into the audience. Ebdon says the K2s are what he’s listening to from an FOH position that’s just 95 feet from the stage.

“There’s been no feedback at all,” he marvels, “even though we have so much audience cheering and singing along getting into his microphone.” (It can be a challenging location, Ebdon acknowledges, but better than the alternative that could put him virtually in a venue exit ramp. “I have to be careful,” he says with mock caution. “If I stand up, they might sell my seat!”)

And the system’s Array Morphing tools, part of the LA-Network Manager EQ section, lets Ebdon adjust the sound for different array geometries and conditions of use to fit every venue with confidence. “I love the FIR filers and the array morphing tools,” he says. “The system doesn’t need a lot of EQ to start with—it’s a very flat-sounding system, so what we put in is what we get out. But if I have to adjust the HF at all, I know that the rest of the system will stay in balance and in phase. It’s just so easy to work with.” 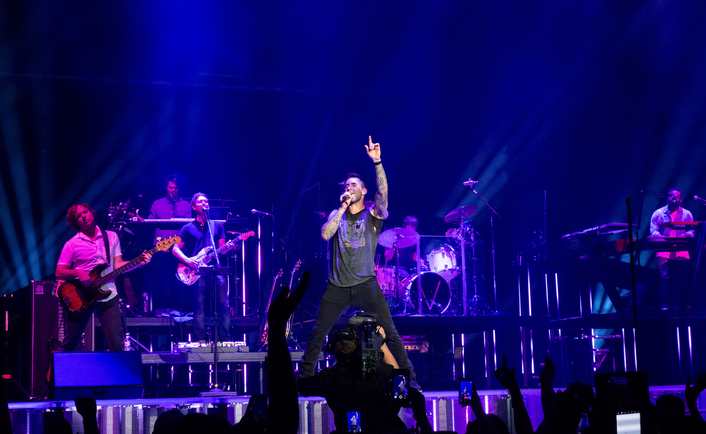 That the sound system for such an immense and important world tour could withstand constant tinkering and keep on delivering world-class sound night after night is a testament to the K1 and K2 designs, says Ebdon. “It’s a great-sounding system and one that’s consistent and so easy to get around,” he says. And with the tour planned to continue, running from early October through March 2017, there will be plenty of opportunities to see what else it can do.