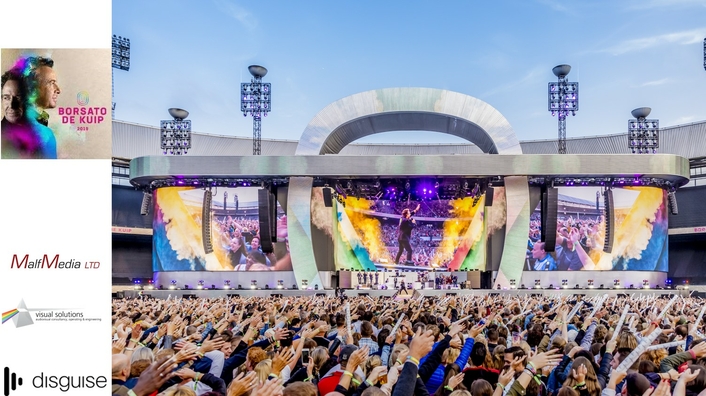 Dutch megastar Marco Borsato recently played a stream of sold out record breaking shows at De Kuip stadium in The Netherlands. The set included a huge scale canvas in the form of a 1,000 square-meter LED screen. To power the impressive visuals needed for this event, Michael Al-Far of MalfMedia and Jo Pauly of Visual Solutions turned to disguise servers to provide the power. Six disguise vx 4 and four disguise gx 2 media servers played key roles in the innovative production driving the video content and facilitating real-time IMAG grading of the live feed and the integration of Notch VFX and multicam AR in the massive main screen graphics.

Marco Borsato consistently has been one of the most successful and biggest grossing artists in the Netherlands in the last twenty years. For the 2019 shows,  Marco specifically requested that the starting point for the De Kuip shows would be the level of last year’s Sportpalais concerts where the team first introduced cinematographic content. “As an artist and photographer Marco felt the time had come for him to be involved in every step of this exciting project, so we had creative freedom, but he had the final say. Together with Set and Lighting Designer Carlo Zaenen we created the content book in which we outlined the look and feel of every song.” says MalfMedia founder Michael Al-Far. 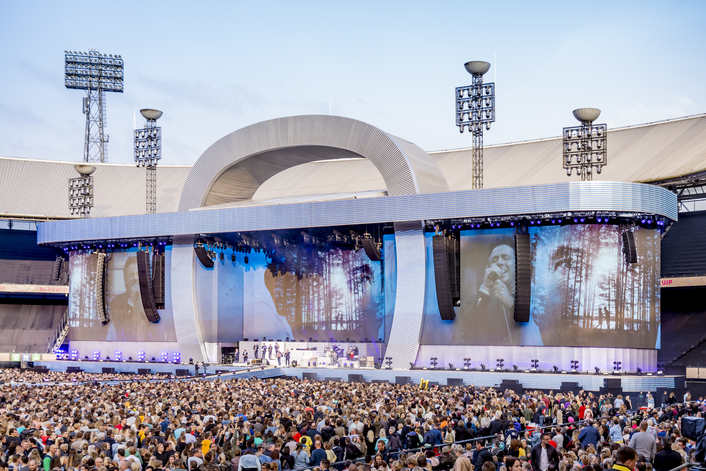 “Marco Borsato was adamant that the live feed would be treated to fit better in the cinematographic content,” Michael notes. As a result, MalfMedia approached Lewis Kyle White to apply his vast experience in IMAG grading for live shows on this project.

The outdoor show posed a number of challenges: starting in daylight and transitioning to night; a canvas that was by some measures the largest screen ever used for an arena rock concert; the IMAG live feed embedded into the content and not shown on side screens; and a set list of 37 songs that all needed to have the same standard of quality.

The team partnered with Studio Regie’s Olav Verhoeven to deliver the cinematographic visuals that would meet Borsato’s mandate to create ‘more than a show’. It needed to be an experience, one that the audience would be talking about for years to come. The 250,000 fans needed to have a sense of grandeur from the moment they walked through the doors. The set was as wide and as high as the arena itself, and every one of the 30 million pixels was filled with content that matched this majestic set.

For the linear content, Jo Pauly and his Visual Solutions team selected six of the new disguise vx 4 servers. Jo Pauly notes that previous Marco Borsato shows had a history of “maxing out” disguise 4x4pro media servers in terms of performance. “For this show we were looking for some extra horsepower, some headroom, and more power on the Notch side with IMAG effects. We benefited from the extra performance of the vx 4s and the multitude of 3G live inputs and 4K inputs,” Jo explains. “The entire system was based on UHD outputs coming from the vx 4 system into the Barco E2 switcher. Whenever the AR images were being used, the vx 4 played out cut and fill layers into the E2 to perfectly accommodate the gx 2 footage onto the linear content.” 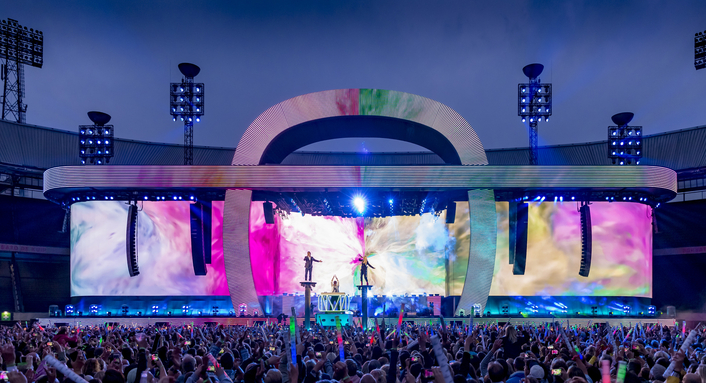 Another large part of the production used Augmented Reality features to create a spectacular effect, wowing the crowds at De Kuip. Together with Hans Cromheecke and Maarten Francq, MalfMedia has been experimenting with Augmented, Virtual and Mixed Reality for several years. “Our experience with AR drove us to use this show as the perfect project to introduce a world first: embedding 4K multicam AR as part of the main screen graphics,” Michael explains. “This meant that the audience didn’t need to look away from the stage to see the AR graphics on a side screen nor was there any need to whip out an extra device like a smartphone. It allowed us to push the boundaries of what was physically possible in a large arena like De Kuip. At the start of the show as the band played and everybody expected Marco to appear on stage we had him appear on the roof ridge instead. It took the audience a few seconds to figure out that the 3D figure dancing on the roof was actually AR, then he jumps down and flies onto the stage in AR. 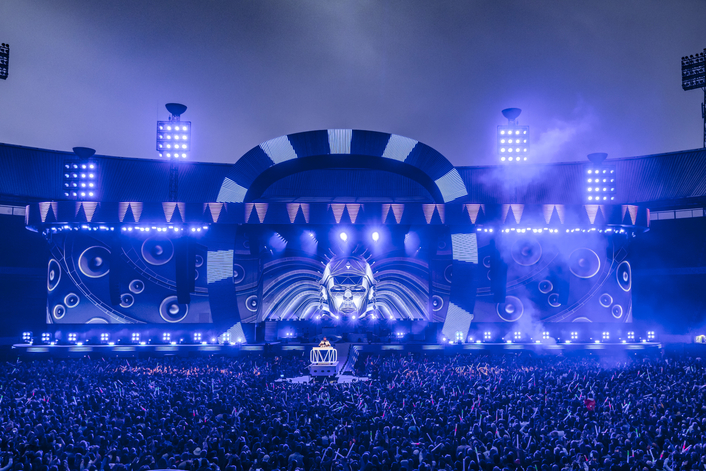 For the AR content lead operator Hans Cromheecke and systems integrator Maarten Francq decided to utilise disguise's gx 2 as servers that would be best suited to carry the AR and MR content.

The show was based on high-end technical solutions and the team realised quite early on that we would need the best and brightest in the room to pull this off. Michael explains, “Just like we did with Lewis, we asked Scott Millar join the team. Together with Hans and Maarten. Scott has been at the forefront of the xR workflow, it made sense that he would join the xR team.” 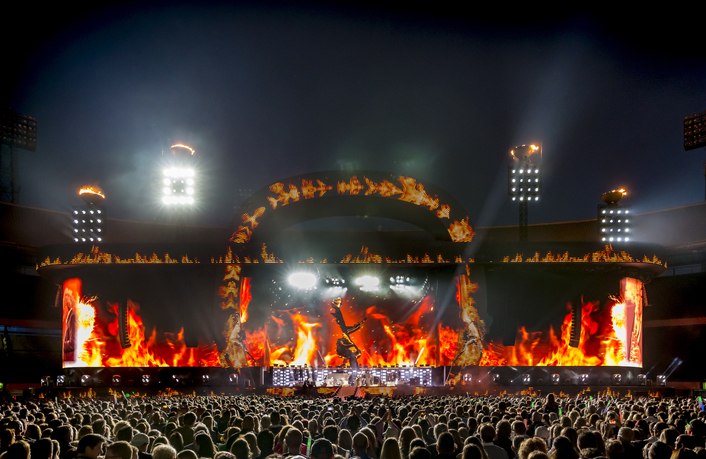 He notes that, “every high-level production around the world is looking for ways to exceed expectations, to provide the audience with an experience they have never seen before. With this show we managed to do that by seamlessly integrating multicam 4K AR into the graphics. That meant the ultimate in audience participation because by using the venue as a canvas and having the audience be part of the AR graphics, the were transported onto the main screen and unknowingly became part of the content for those few songs that we used it on.” 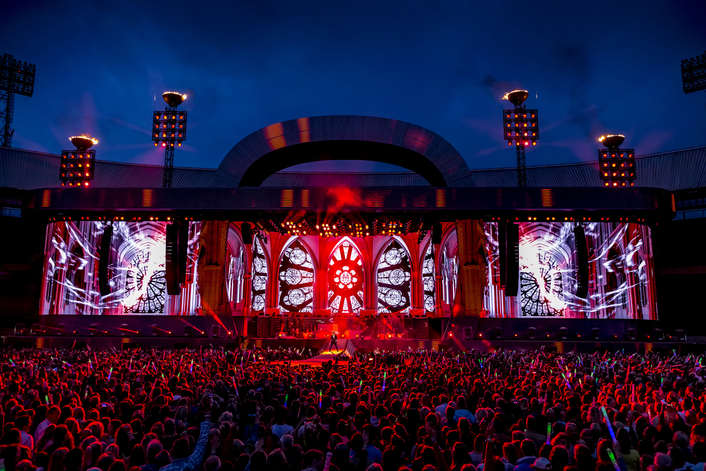 Michael notes how he found a balance between using technology for the sake of it and using it to enhance and bring value to the show. He explains, “we’ve taken a couple of big steps towards blending techniques like 3D IMAG integration and AR into a well established workflow. Lots of systems out there will allow you to do AR, but what the brilliant team at disguise have perfectly grasped is the need for the AR elements to seamlessly integrate into the workflow. It needs to handle, feel and look like part of the content process.”

Overall, the disguise workflow enhanced the production in numerous ways. “As usual, the powerful visualisation tool resulted in a big gain of time,” says Jo Pauly. “Together with the artist we could show in real time the look and feel of the stage together with lighting in the Wysiwyg studio. We had imported the disguise feed over NDI into the Wysiwyg server, and it worked like a charm!” 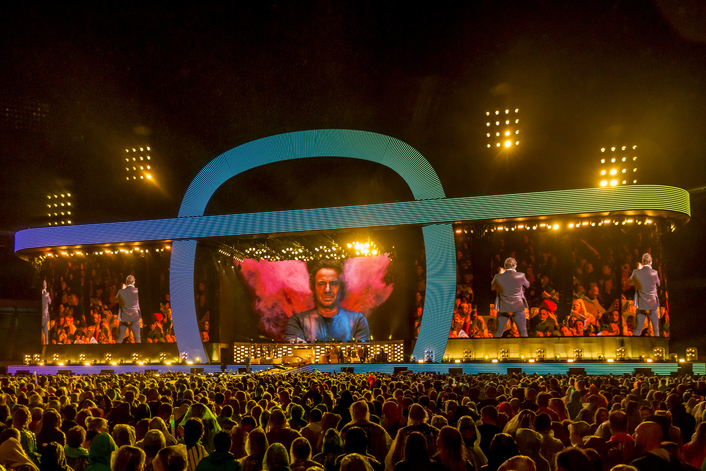 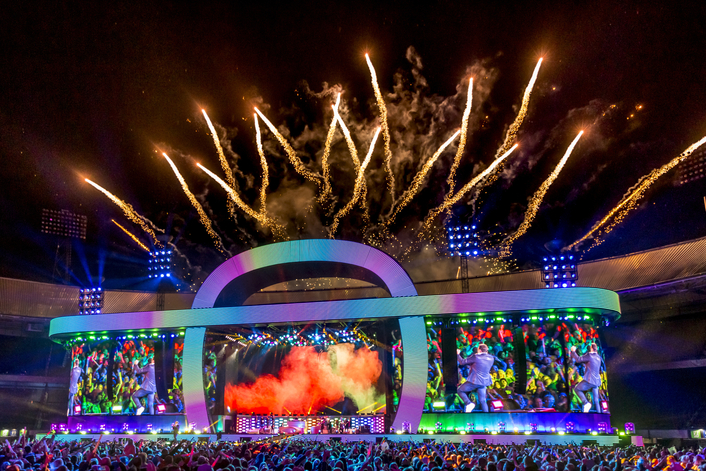