Making A Point at Beachvolley Deluxe

.
Belgian Lighting Designer Frederik Heerinckx of BlackBox Design was hugely anticipating his first chance to use Robe’s new Pointe fixtures on a show .. and the occasion presented itself for the 2013 Beachvolley Deluxe Championships in Baal.

The annual three day event, which is organised by vzw Beachvolley Deluxe and a dedicated team of volunteers headed by Stijn Saliem, celebrated its 14th glorious year, welcoming over 200 teams and up to 1000 spectators a day … to enjoy some superlative beach volleyball action! It sold out in 15 minutes!

Baal might be decidedly landlocked, but the spirit of the beach lived on … complete with a fully sanded venue, volleyball courts and two large beach parties staged on the Friday and Saturday nights, complete with an all-action DJ line up.

Production values are high on the agenda at this event which features a StageCo stage, a specially designed roof from WiCreations covering the venue together with sound, lighting and video equipment supplied by locally based NSL.

Its proximity to the famous Werchter live music and festival site also means that many of the regular tech crew from there get involved in Beachvolley Deluxe.

Frederik’s design was based around a Robe moving light rig. Lighting is crucial to highlighting the volleyball players naturalistically during the daytime matches and also for creating a cool and cosy ambience for the parties – the largest of which is attended by 6,000 revellers!

The elegant tensile roof structure ideally lends itself to being coloured and textured with lighting and effects.

The 12 Robe Pointes were rigged on a series of drop bars coming off the roof and over-stage trusses, together with the other Robe fixtures, which included 16 x ROBIN Spot 600Es and 18 x LEDWash 600s.

These and a selection of other lights were all run by Frederik from a grandMA2 lighting console, which also triggered an ArKaos media server running all the playback video content (and also captured live video.)

Robe is currently Frederik’s moving light of choice and he uses the brand whenever possible. Generally he likes the bright output and the high speed of the fixtures … and also the reliability – which almost goes without saying! 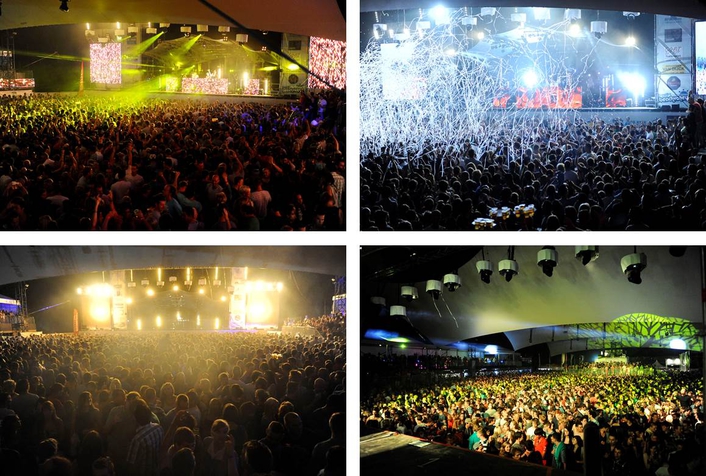 He also believes that “Robe puts a huge amount of thought into features and effects that will be useful and practical to an LD when designing new products”.

After using the Pointes for real, he was even more impressed with their performance than he’d envisioned. “The brightness was fantastic and the zoom excellent,” he declared after the gig!

He knew they were versatile from the demos he’d seen so far beforehand and the tech spec, but he was still surprised at how much better everything looked in the reality of a show environment. He especially likes the effects that can be achieved using the linear prism – with the unit still retaining all its brightness.

“At last a light that can be used as a really effective wash and as a proper effects fixture,” he enthuses, adding that Points will figure significantly in his upcoming work.

Stjin and his co-organisers were also very satisfied with the lighting and glad they went to the extra effort of hiring in the Pointes for the event at Frederik’s request.

Beachvolley Deluxe 2013 was another great success and enjoyed some authentically beach like soaring temperatures for the weekend!

Adding to the visual equation in some considerable style for this year’s Beachvolley parties were pyrotechnics, designed and supplied by AVM Belgium.

Robe is Made in Sud
Robe for Korean Open Concert
McFly Makes a Robe Pointe... at the Royal Albert Hall