Madonna Gives Sennheiser All Her Luvin’ 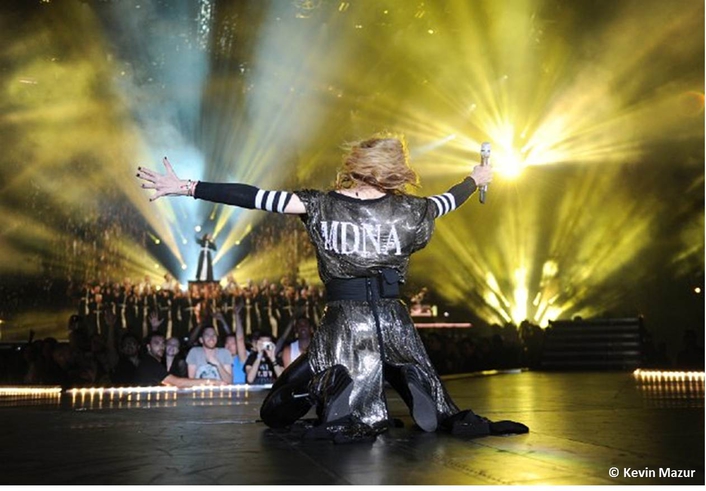 .
Stadiums, arenas and open air venues across Asia, Europe, North and South America are hosting Madonna’s 2012 MDNA World Tour with all featuring a large Sennheiser microphone and RF system which helps deliver a flawless performance, night after night. Madonna has six Sennheiser SKM 5200 mics for each show, which, as monitor engineer Matt Napier explains, get tested to the limit.

“The 5200s get a real battering.  The whole first section of the show is highly stylised with an almost comic book aggression. There is, a lot of staged violence and the microphones get hurled around and are frequently being thrown to and from dancers and onto  the floor,” commented Napier. “We’re going through a new microphone every ten shows or so. But given that the 5200 is not a microphone designed for such abuse, I think they are standing up remarkably well. Of course we have a whole drawer of spares from Sennheiser!” he concluded.

The tour features six further 5200s with MD 5005 capsules for backing and guest vocal microphones. Together with Madonna’s vocal mics, these use 12 MkII 3732 wireless receivers. Fourteen 2000 series wireless systems are used for in-ear monitors, with 14 more for guitar systems. In addition, a percussion trio uses SKP 2000 plug in transmitters, taking the overall wireless channel count to around 50.

“The plug-in transmitters are a very useful solution, because the trio comes on stage, does its section and goes off again. There’s no time to cable the musicians up. It’s a very neat way of using RF,” says Napier. “On top of everything else, there is also a wireless comms system, so we are probably up to 70 channels of RF at each show - and we have had no problems at all.

Everything is using the built-in networking, all programmed on Wireless System Manage, which saves a huge amount of time. Eighth Day Sound, the audio rental company provided the Sennheiser equipment after purchasing from Sennheiser SEC. Every show so far has been trouble free!