Luc Lafortune: Poetry and Light on his European "Tour"

.
Paris-Bergamo-Madrid: these were the three cities the famous lighting designer Luc Lafortune visited during his cycle of conferences. His "Art and Poetry in Stage Lighting" events were highly successful among professionals and amateurs alike. Luc Lafortune is unanimously considered one of the most creative and innovative lighting designers in the world of show business of the last thirty years. His approach to lighting design features elements that are so artistic that it is defined as "poetry". His name is inextricably linked to the Cirque du Soleil, whose myth he has helped to create since 1984.

The conferences were centred around two of the Cirque du Soleil's most successful shows: Kà and "O". Luc got right down to the roots of the creative process through thorough artistic and philological analysis. He explored the contents of each show and the message every scene was intended to conjure up, before moving on to the search for inspiring graphic effects and colours which leads as a conclusion to the choice of technical tools for lighting the shows. 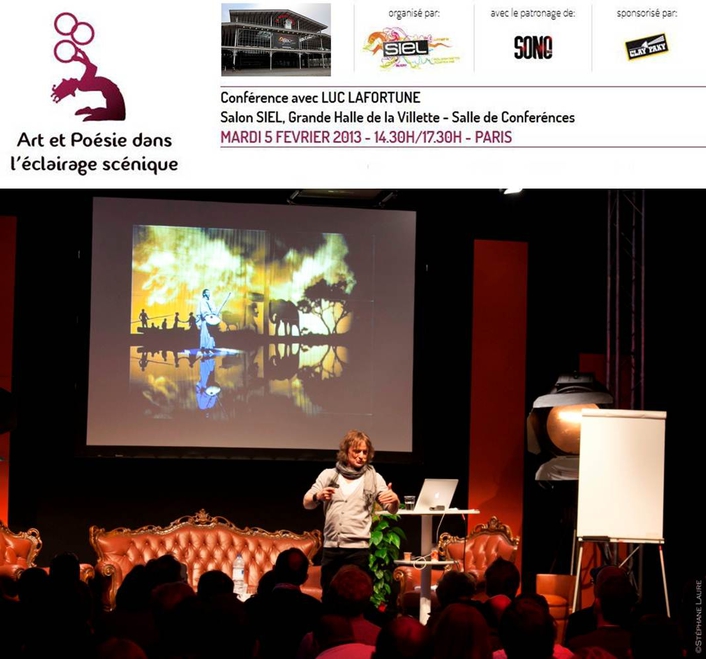 The Paris Conference was held at the Grande Halle de la Villette on 5 February during the most important lighting trade show in France. The conference was organized by the SIEL trade fair and sponsored by the specialist journal SONO MAGAZINE and CLAY PAKY. It sold out with over 150 people present, who did not want to miss a single minute of the long presentation made by the famous lighting designer. Luc was able to express himself in French since he is a Canadian from Quebec. During the later conferences, in Italy and Spain, the audience was provided with simultaneous translation through headphones for the whole event. 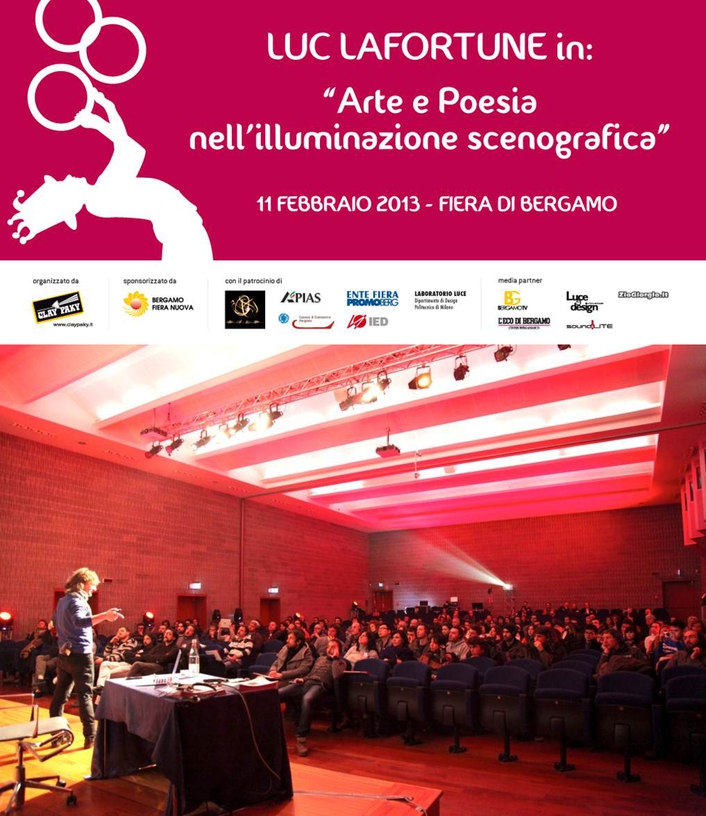 The Bergamo conference on 11 February was organized by Clay Paky at the new Bergamo Fair Conference Centre. Besides receiving support from local institutions (Promoberg and the Bergamo Chamber of Commerce), the conference was also sponsored by industry-related organizations such as AILD, APIAS, the Istituto Europeo del Design and the Indaco Department of the Politecnico di Milano. Thanks to this aid and the active contribution of media partners and specialized journals (Luce & Design, Sound & Lite, Ziogiorgio.it, L'Eco di Bergamo and Bergamo TV), over 200 people attended the conference, despite the difficulties caused by snow on the day of the event. Among the many spectators who attended the conference, there were a lot of lighting designers and lighting directors  from major Italian television networks, people from lighting service companies and groups of university students studying lighting design. The interest in Luc Lafortune's professional and artistic account was evident from the numerous in-depth questions and lively debate that followed the conference. This also proved to be a valuable opportunity to find out what goes on behind the scenes and hear some curious anecdotes about the "Cirque". 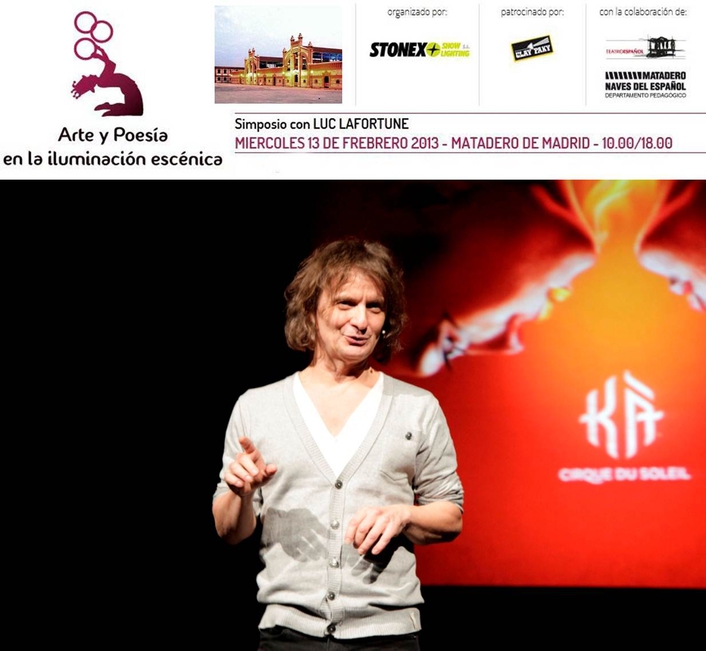 The last conference took place two days later in Madrid. Over 250 people turned up in the splendid location of the Matadero, a former slaughterhouse which has now become one of the main centres of culture and contemporary art in the whole of Spain. The event was organized by Stonex Show Lighting, an important Spanish company that has offered technical solutions for the entertainment industry since 1980. It is especially renowned in the field of professional lighting. Besides being one of the sponsors of the event, Stonex is the exclusive distributor of Clay Paky lights in Spain. The Teatro Español and the Matadero itself also cooperated in the organization of this historic conference in Spain.

At the end of each of the three appointments, the audience expressed its enthusiastic approval of the contents of the conference and the style of presentation. Luc Lafortune not only came over as a lighting designer with an absolutely original, creative and - in some ways - "rebellious" approach, but also proved to be a great communicator able to express himself in a simple, understandable and very engaging way for all, as is often the case with true experts.

Pio Nahum, Clay Paky Sales and Marketing Manager, was very pleased: "organizing this cycle of conferences was challenging, but the success of this initiative has rewarded all our efforts. It is clear that those who love the world of entertainment are interested and glad to be told about the artistic approach that lies behind each production, even unconventional ones. Luc's great expressive simplicity struck everyone. He is a true artist who loves to share his experience, and he does so by accepting to meet with other professionals from the world of lighting. The audience was fascinated by his personality and his creations. I have rarely seen such a long conference, where everyone was glued to their chairs from start to finish!"