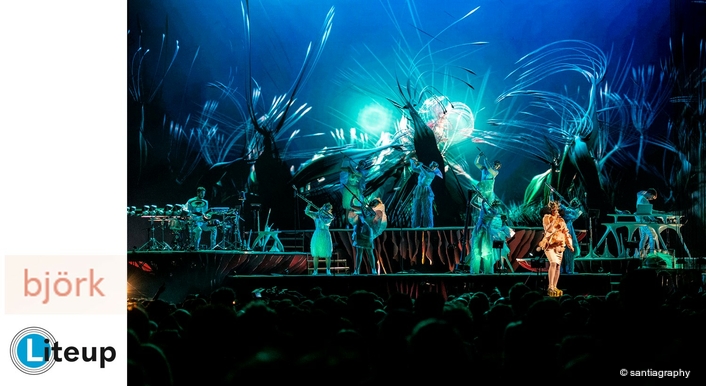 Southampton, UK-based lighting rental specialist Liteup supplied lighting, video server and control plus rigging – 136 points including Kinesys automation – equipment for all technical departments for the recent UK and European leg of Björk’s ongoing highly acclaimed Cornucopia tour, for which the dramatic lighting was a co-design by Bruno Poet and Richard White.

Bruno is well known as a theatre and opera LD and for his creative lighting for bands like avant-rockers Sigur Ros, also from Iceland. Richard White has worked for Björk as a programmer and lighting director on the road for the last six years, and together the two enjoyed a fantastic synergy that has produced some stunning lighting.

Björk is renowned for her beautiful, esoteric and uncompromising live productions built on visual and sonic experimentalism and taking performance into new and sometimes unnerving contexts. The focus of the Cornucopia show – initially produced as a series of one-off shows at new arts venue The Shed in New York, mid-2019 – was nature and the environment, touching on some of its frontline issues.

The visual starting point for Bruno and Richard’s lighting design was the breath-taking video content created by artist and designer Tobias Gremmler – with whom Björk has worked previously – together with Chiara Stephenson’s striking and intricate set designs. 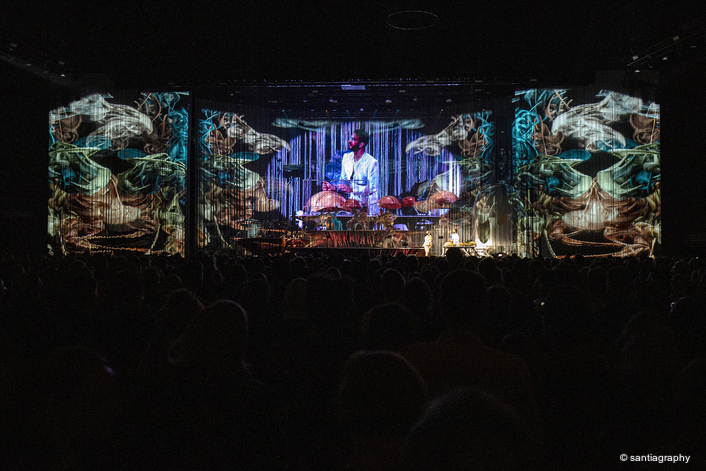 Marc stated, “We were extremely proud to be part of a ground-breaking production like this. The show looked fantastic and absolutely blew me away when I saw it. The production was very detailed and precise with all the elements both physically and artistically linked.”

Björk is heavily involved in all aspects of her live show productions and she wanted all the show’s visual elements to look and feel organic and to have a fluid synergy. The stage floor was modelled on mushroom heads complete with their complex gill structures on the underside, and opening / closing string curtains stage left, right and upstage centre together with a LED screen at the back all added perspective and texturing. 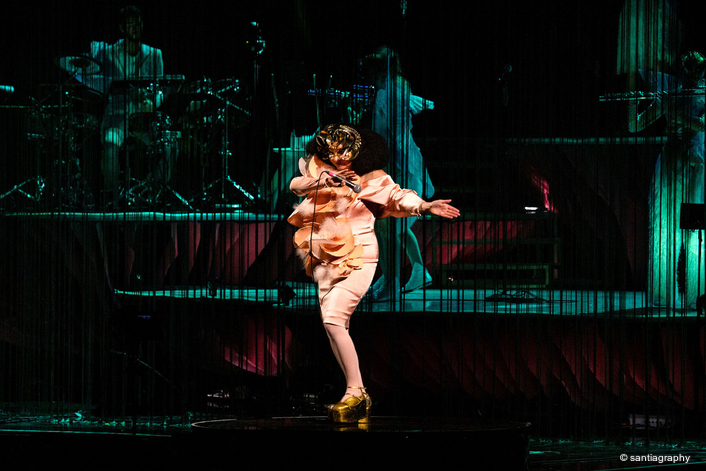 The lighting design brought a theatrical flourish to a concert stage and was also arranged in layers, offering the ability to change and shift the environment and to highlight and emphasise different areas separately or combined.
At some points, the visuals took centre stage, and other times the video faded into the background while lighting and scenics took up the narrative, with the two medias working closely and complimentarily throughout.

Two Robe BMFL WashBeams running on a RoboSpot remote follow spotting system were positioned at FOH off to the sides which was to increase the subtlety of their impact on stage – the goal being that the artist should not even feel their presence.

The RoboSpots were a key element. “We always try and spot Björk from a very side-on angle which isn’t always possible when touring multiple venues,” stated Richard.  Using this system allowed him to keep control of all the colour and intensity parameters from FOH making the artist’s key light much more ‘live’ and controllable, particularly for this show with layered projection surfaces and automated drapes.

Thirty-two GLP X4 Bar 10s and 20 x X4 Bar 20 LED battens were positioned on the over stage trusses in upstage and downstage rows. The staging concept is based around a 'utopian planet' and Bruno and Richard wanted to be able to create multiple sunrise and sunsets with stage-wide shifts of colour. 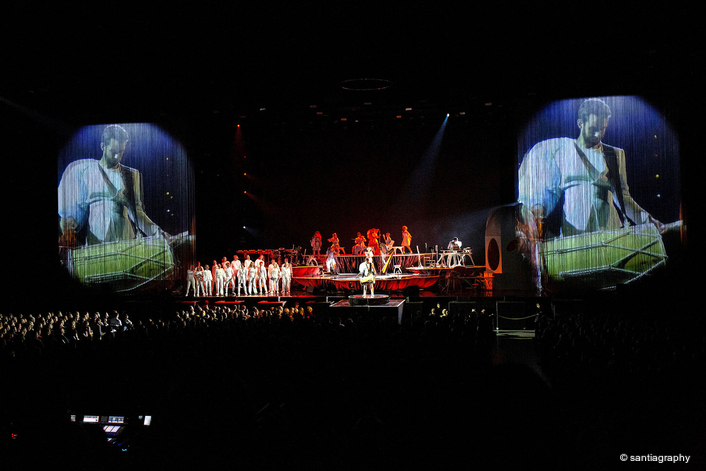 Both GLP JDC1 and SGM Q2 strobes had been used throughout all the shows, offering a wealth of different effects from the same unit. On this leg, Richard spec’d Q2s for the floor strobes and JDC1s for the overheads as they had swapped to a festival-style rolling stage with the floor units completely visible. The requirement was therefore for a small footprint strobed that absolutely kicked!

Twenty Astera AX3 ‘LightDrop’ battery powered LED ‘pucks’ were dotted around the stage providing a neat wireless up-lighting solution to highlight the mushroom gills and other set elements.
“These were our footlights and sat on the stage set itself,” explained Richard. They wanted to achieve close angles and bring another dimension to the lighting but without cabling and fixing points.

Richard had used them before and knew they’d be “perfect for this job”. They could be charged during the load-in and simply positioned and focused before doors each day.
Two grandMA3 light consoles were supplied by Liteup for control with a disguise 4x4 pro media server for the playback video which was operated by Daniel Bond.

One of the biggest challenges for lighting was during the more ‘video-driven’ songs, where people and set had to be lit in complementary and subtle ways, and serious detail went into finding angles “to create our effect but avoid any of the projection surfaces”.

This was the primary reason they needed so many fixtures with framing shutters and at one point, lights had to be rigged on the curtain trusses themselves in order to light performers whilst sandwiched between multiple curtains.

The rigging detail comprised 136 motors from Liteup – a mix of quarter ton, half ton, 1-ton and 2-ton and including the five Kinesys vari-speed hoists – which were shared between lighting, audio and video departments, together with 143 metres of Litec PR60 pre-rigged truss. Head rigger Steve Belfield worked alongside Toby Lee.

Dan Bunn worked closely with Steve to work out multiple rigging solutions for a show that had to be millimetre accurate when it came to the positioning of all the elements each day. This included getting one of the truss structures re-engineered to achieve a result not possible with any off-the shelf-product.

The lighting crew chief was Aiden McCabe, Ryan Harrington oversaw dimmers and the lighting crew was completed by techs Simon Carus Wilson and Mick Stowe, all working directly for the production. All were chosen by Richard for the tour and most had worked with him and Bruno previously. They were picked for their experience with highly theatrical shows as well as music concerts … where attention to detail is crucial.