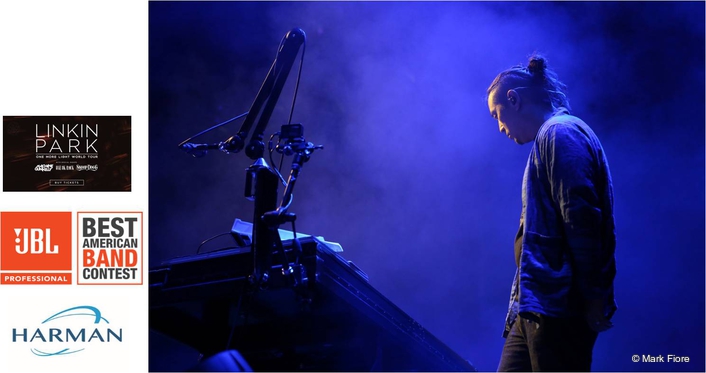 Unsigned U.S. bands have until May 31 to submit a video of an original performance

Hahn is best known as the DJ and programmer for two-time GRAMMY Award-winning band Linkin Park, which has sold more than 50 million albums worldwide, and just released their seventh studio album, One More Light. An accomplished artist and painter, Hahn directed the feature film Mall and more than 30 of Linkin Park’s music videos, including “Numb,” “What I’ve Done,” “Bleed It Out,” and “New Divide” – which has received more than 250 million views on YouTube.

The contest, announced in early May, gives musical groups from across the United States the chance to win an array of prizes, including a performance slot at this summer’s JBL Fest in Las Vegas. Currently open for submissions until May 31, bands can submit a video of their original performance that accurately represents their music and performing style.

In addition to a performance slot at JBL Fest in Las Vegas this summer, the grand prize-winning band will receive $5,000, a new JBL EON ONE PRO PA, roundtrip airfare to Las Vegas with a three-night stay at the Hard Rock Hotel and Casino for up to six band members, tickets to other JBL Fest events and more. Two runners up will also be awarded with JBL EON ONE PRO PA systems.

ABOUT HARMAN
HARMAN (harman.com) designs and engineers connected products and solutions for automakers, consumers, and enterprises worldwide, including connected car systems, audio and visual products, enterprise automation solutions; and services supporting the Internet of Things.  With leading brands including AKG®, Harman Kardon®, Infinity®, JBL®, Lexicon®, Mark Levinson® and Revel®, HARMAN is admired by audiophiles, musicians and the entertainment venues where they perform around the world. More than 25 million automobiles on the road today are equipped with HARMAN audio and connected car systems. Our software services power billions of mobile devices and systems that are connected, integrated and secure across all platforms, from work and home to car and mobile. HARMAN has a workforce of approximately 30,000 people across the Americas, Europe, and Asia. In March 2017, HARMAN became a wholly-owned subsidiary of Samsung Electronics Co., Ltd.