Canadian singer / songwriter The Weeknd is currently rocking plenty of style and enjoying success, critical acclaim, multiple awards and several hits from his chart-topping third studio album ‘Starboy’ …. propelling him a long way from his underground roots and early anonymous mixtapes uploaded to You Tube in 2010. Lighting for 2017’s ‘Starboy Legend of the Fall’ tour has been designed by Sooner Routhier who picked Robe Spikie moving lights together with BMFL Spots and WashBeams to be at the heart of the rig.

Sooner has worked with The Weeknd (Abel Tesfaye) since 2012. She and design business partner Robert Long of SRae Productions were contacted by his creative directors Lamar C Taylor and Drop last year and asked to assist with this tour, which involved lighting an impressively beautiful flown sculpture created by production designer, Es Devlin.

Much of the vibe of the show is dark, saturated and moody, and with projection also being central to bringing the powerful scenic centrepiece alive, the task of show lighting started with several brain-teasing challenges. 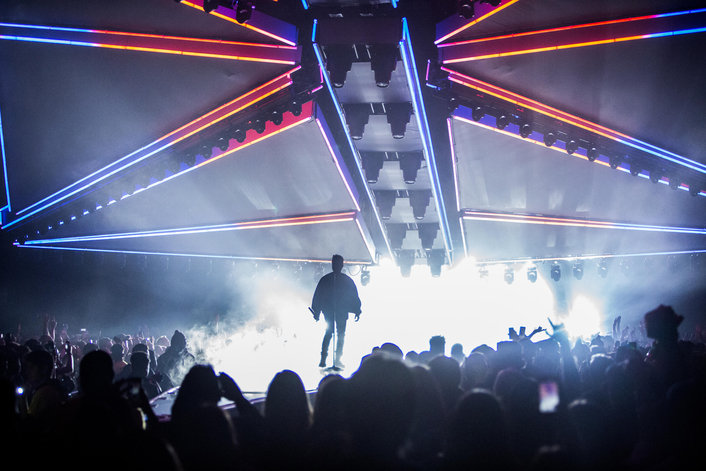 Nashville based Sooner – known for her fresh and inventive approach – enjoys challenges and thinking out-of-the-box.

She worked closely with lighting director on the road / associate LD Darien Koop on programming and evolving this one, while SRae Productions’ technical director Matt Geasey coordinated practical and physical aspects like integrating lighting with the set building process for a tourable solution. 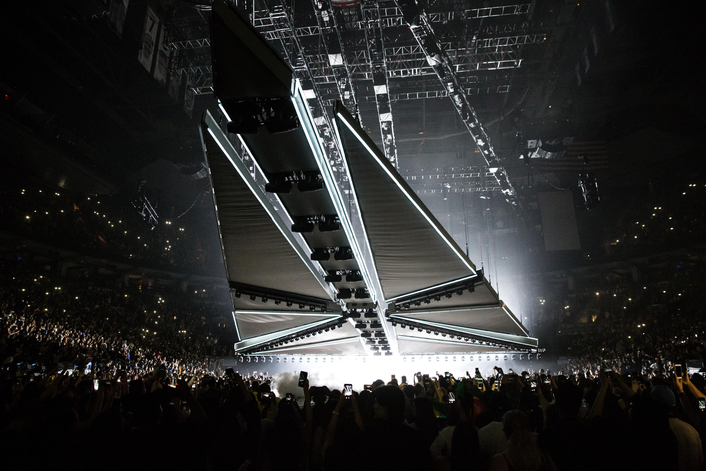 The 80 ft. wide by 120 ft. long triangular structure constructed by TAIT is made out of 10 smaller triangles and eight trusses, all individually flown on multiple axes of automation, so it can transform into numerous different shapes. It resembles a huge, elegant origami-style jet-fighter and makes a massive architectural statement that defines the performance space.

The 10 moving flaps are covered in stretched projection screen material and finished in magnetically fitted plexi fascia panels. The nose, tail and wing sections come down to within touching distance of the stage, which included a long runway below. 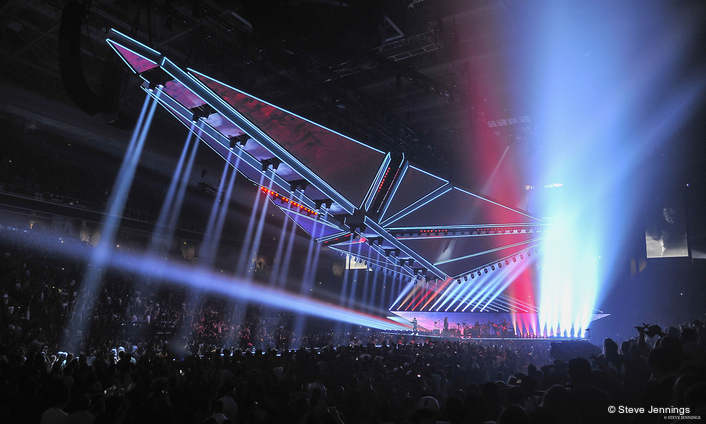 The entire lighting design is based around complimenting this aerodynamic piece of art and the video projections applied to it via 20 projectors which are positioned on towers located all around the arena.

The key to producing lighting to work with the intense projector beams … “was keeping it simpler and cleaner than other tours, so it looked precise and definite in combination with the projector beams.”

The 55 x BMFL WashBeams are divided into different groups. 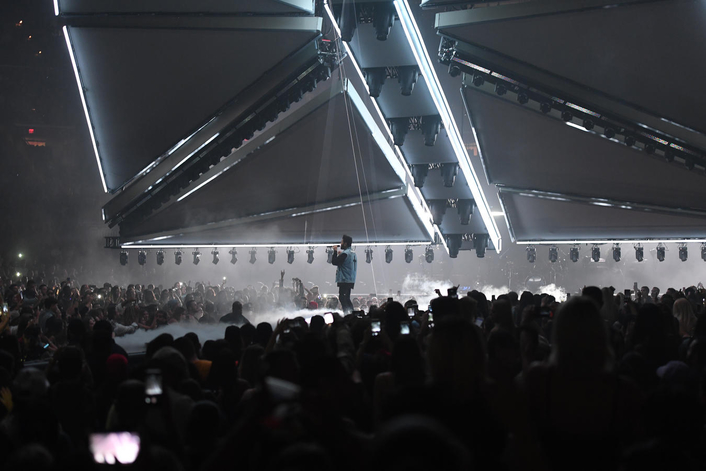 Twenty-four in 12 pairs are rigged along the large double-truss central spine of the structure, providing high impact effects lighting and highlighting the gloss-finished runway below, which brings The Weeknd up close to his fans.

The rest of the BMFL WashBeams are on the grid flying above the structure, eight each positioned on the two long edges, with another eight towards the back of the grid where the triangular shape is widest. These produce color, texture and some incredibly cool and spacey looking atmospheric engineering from above, outlining the structure and bringing a totally different dimension. 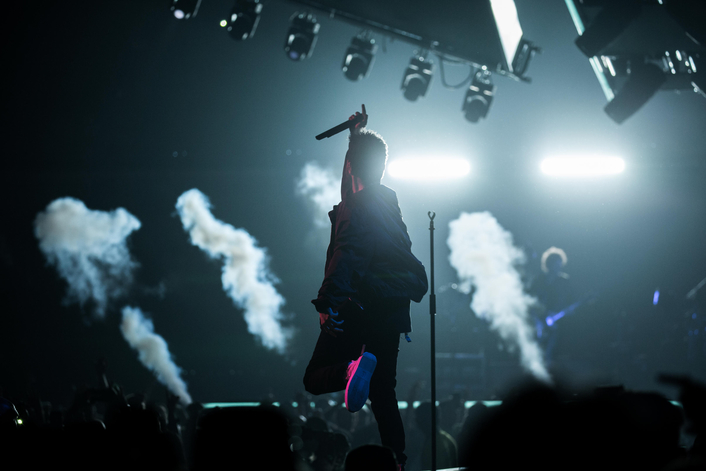 A single BMFL WashBeam sits upstage center at the stage end of the runway and is used as a powerful beam to silhouette the artist.

The eight BMFL Spots are in four groups of two and used as follow spots.

There are two at each end of the upstage truss above the rear 80 ft. wide LED video wall, with two more stage left and right, on the sides of the mother grid, where cutting in from this mid position they can light anywhere onstage or along the catwalk. All eight of these BMFL Spot fixtures are operated using a BlackTrax remote system, triggered via the main lighting console. "They are brilliant for this application," stated Sooner. 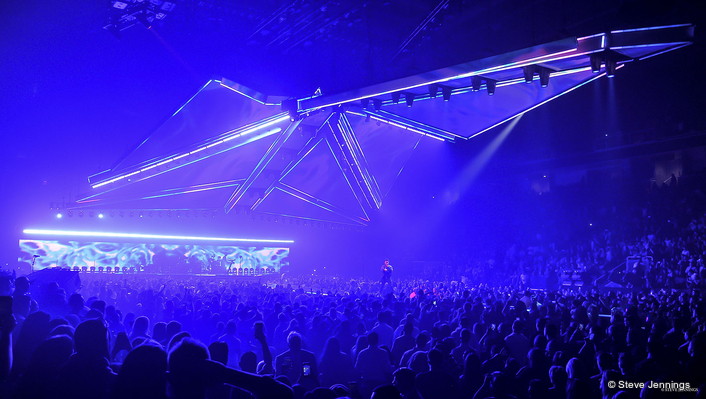 They decided on using BlackTrax due to needing unique positions every day for their spot lights to hit The Weeknd as he moves up and down the long thrust, and to deal with several automation presets (as the structure moves) that block the standard arena follow spot sightline. Sooner is also not a fan of seeing people operating spots directly above the audience … all factors which made the combination of the BMFL and BlackTrax ideal for this scenario.

Darien added, “We’ve not had a single BMFL Spot or WashBeam go down the entire tour during the show. Reliability is really important!” 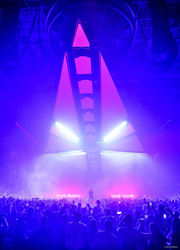 Darien has been a big BMFL fan ever since the fixture was launched in 2014. “They continue to outperform virtually every other fixture in this class … and some!” he said, explaining that they are being used in a raw and ‘pure’ way on this show, with features like brightness smoothness and reliability mission critical.

“The WashBeams have been incredible” he stated, “Truly I love them!! Each fixture performs flawlessly, making one amazing look after the other.”

The shutters have been essential for many reasons, including framing out light from the grid above spilling down onto the set, and for tight focused key light onto the band down below.

Thirty-four of the 90 x Spikies are positioned along the structure’s back truss (traversing its full width) with the other 56 deployed on four angled internal 'fins'. They are a workhorse fixture for musical accents and other specials.

Sooner loves the output for the tiny size of the Spikie as well as the versatility. "You can flood them out into a wash or tighten them up to be sharp and beamy." She added that with 90 of them, they can create a massive amount of dynamically different looks throughout the show.

Darien thinks Spikies are a perfect fixture for this application due to the speed, brightness, pan/tilt angle, zoom and prism and reports that they have been “incredibly reliable” as well!

The structure’s unique shape is further accented with zoned LED strobes and outlined with LED battens. Upstage is the LED video wall and a truss full of moving lights at the top. There are also two side LED screens for IMAG.

In addition to dealing with the projections in a finessed and practical way, the other big lighting challenge for this tour … was completing the complex and detailed programming needed in the timeframe.

The two weeks of production rehearsals in Rock Lititz Studio in Pennsylvania were spent intensely programming. Cues were tweaked and fine-tuned in incredible detail, a process still ongoing for the initial shows, to ensure that the required separation between lighting and projection lumens was achieved, and that projection wasn't flooded out by lighting. "It was a VERY delicate balance," reiterated Sooner. 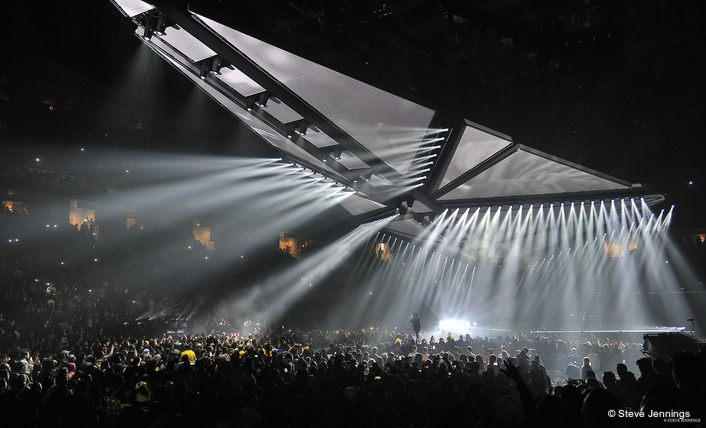 The programming process required so many person-hours that she and Darien worked in split-shifts. Sooner took the daytime slot, so she could also be present when the artist, creative directors and Es Devlin were there. After a briefing on the day’s notes, Darien took over and blitzed-it through the night, populating the grandMA2 console with more cues.

Darien also worked closely with d3 media server programmer Louis-Philippe Guadreau (LP) who is stationed at FOH during the show making live adjustments to the projection mapping masks. The positional information from the automation system is fed into the d3 to keep the images synched to the movement, while the IMAG mix is cut by Kevin Carswell.

During the pre-production stage, the tour’s production manager Rob DeCeglio and TAIT were instrumental in developing safe and speedy solutions for set and lighting. 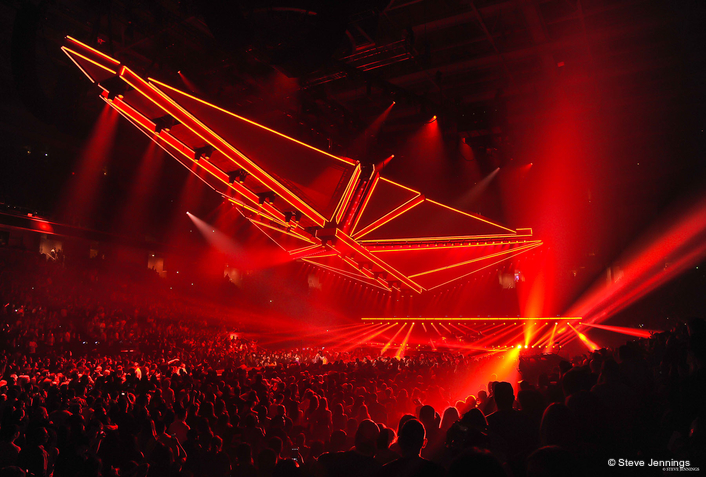 As much of the lighting as possible is installed and travelled in pre-rigged truss, with four trucks dedicated just to double-stacked rows of PRT sections including all the Spikies and most of the BMFL WashBeams. Stage manager Rod van Egmond oversees the daily truck pack and makes sure the kit all gets transported safely show-to-show.

All the lighting and video kit is being supplied in North America and Europe by Solotech, project managed for them by Rob Kennedy.

Lighting crew chief Matt Lavallee is working alongside nine technicians, and there are six on the video crew including engineer Serge Bergeron. Head rigger is Chris Wilson, who supervises the 130 points needed each day to get the flown rig and the structure spot on.

The tour is scheduled to continue for the rest of 2017. 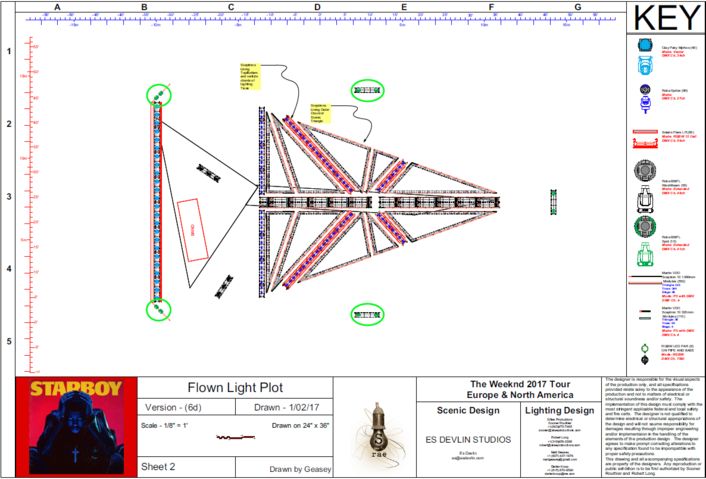