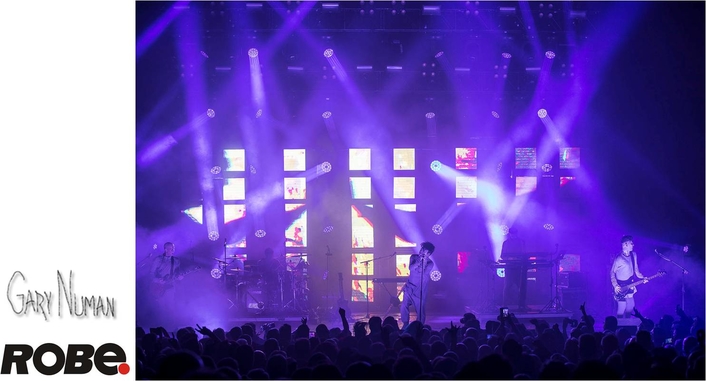 Gary Numan is back with industrial strength impact to match the success and acclaim of his 21st album, “Savage (Songs from A Broken World)”, which stormed into the UK charts at number 2, energising a massive interest in the artist who has influenced a generation of electronic music with innovative sounds and ideas whilst maintaining a super-loyal cult following.

Luke Edwards of Cue Design has worked as Numan’s lighting and visual designer for the last four years keeping everything looking fresh and interesting onstage and for this tour, he specified 36 x Robe moving lights for the touring package with 18 x Spiider LED wash beams and 18 x of the new LEDBeam 150s.
The artist initially gets involved in the style of the stage design when planning a tour, then leaves Luke to bring his own touches of lighting magic to the table. 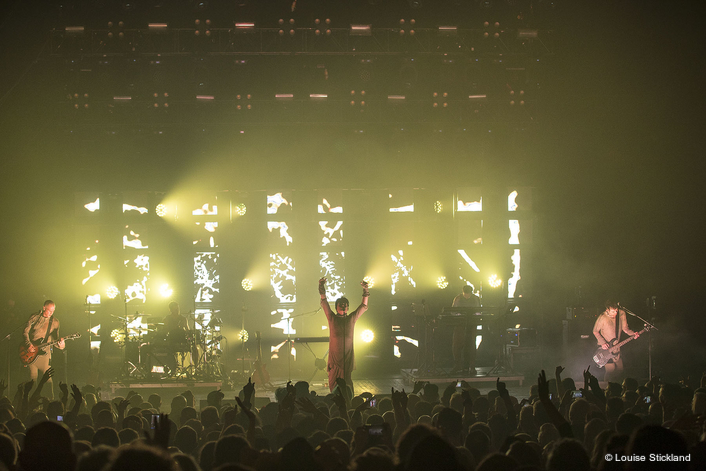 For this one they wanted to include a video element and make the show look as awesome as possible, all the time reinforcing the album themes based on the blending of Western and Eastern cultures in a post-apocalyptic world, arid and desertified by global warming.
The eight columns of video are made from panels with some gaps in between to give a more fragmented and random appearance, but positioned close enough so they can easily display a full image. They are rigged onto scaffolding frames with wheel-boards at the bottom for easy stage access. 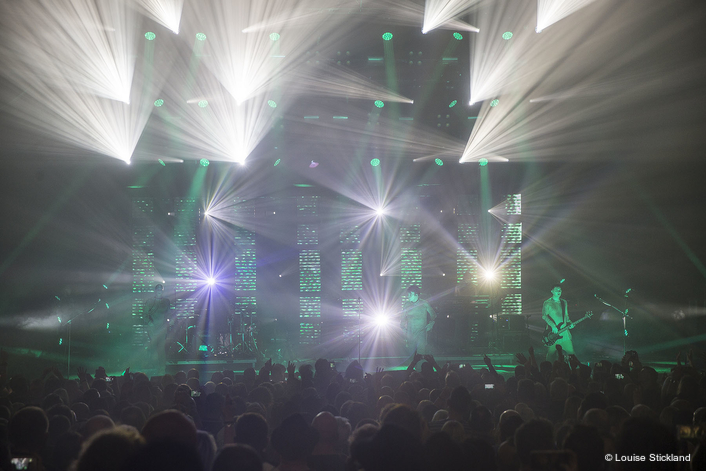 The vertical gaps in between the eight columns are filled with the 18 x Spiiders, nine per side, clamped to the scaffolding structure.
The 18 x LEDBeam 150s are arranged in groups of three on three small stands each side and are used for low level cross stage lighting and effects. 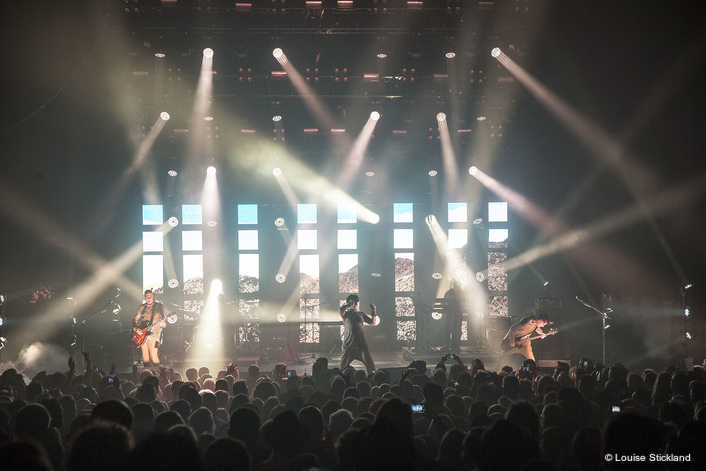 The show is heavily back-lit to help capture the dystopian mood of the album concept, so these Spiider and LEDBeam 150 positions are invaluable for low-lighting, lighting Numan and the band who are upstage. The low angles provide an edgy contrast, skimming mysteriously across the stage, to the overhead and back lighting.
Luke used Spiiders previously on a run of warm-up gigs in the summer and before then he has used them on other tours including the Danish avant garde musician / songstress Agnes Obel earlier in the year. 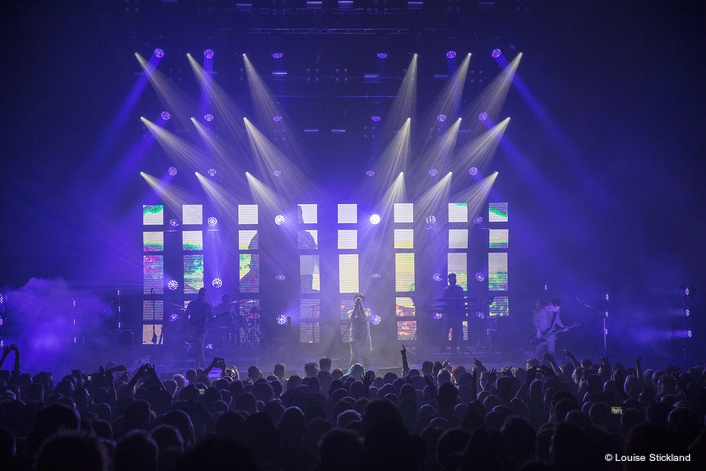 He likes the fixture’s wash and the beam effect and the way these can be woven together into complex and detailed looks. In this design, their power and potent colours make them excellent silhouetty back lighting tools and the flower effects have been extremely useful to create break-up effects through the band … without having to have another set of fixtures! 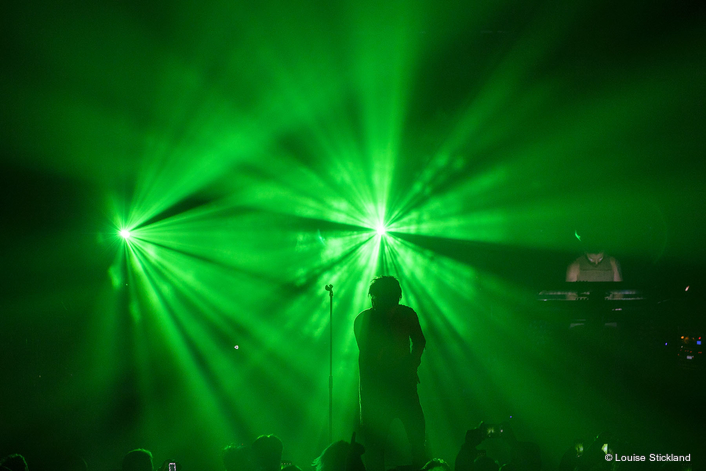 The LEDBeam 100s, being at the low height, can be tucked in very discreetly to any gig, and are proving ideal for illuminating heads, bodies and legs in the fractured oeuvre of the show.  Luke appreciates the “lovely diffused wash” produced when the LEDBeam 150s are zoomed out and the spindly fingers of light when zoomed in which can be beamed into the audience, “It’s great to be able to use them for multiple effects”. 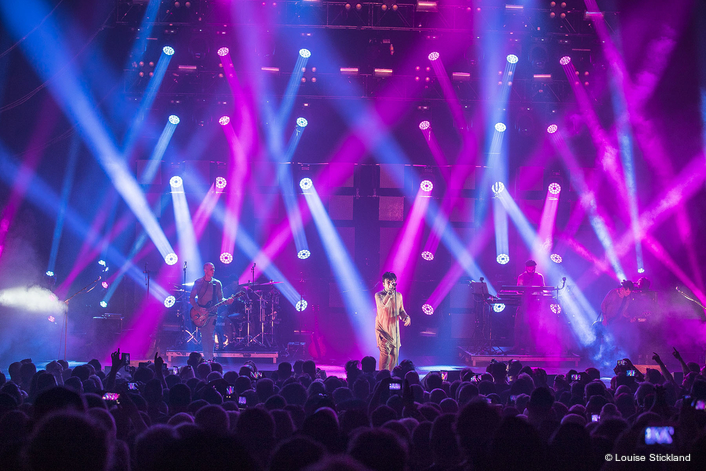 He also thinks they look great on camera with an excellent ‘honeycomb’ factor.
The lighting is stark, harsh and contrasty. There’s lots of flashing, strobing, retina-burn – the Spiider flower effect really rocks when strobed -  and there’s numerous lots of big moments to keep up with the pace, pulse and persistent energy of the music, heavy with synth and guitar riffs, the more existential Savage numbers, interspersed with some Numan classics to the delight of his dedicated fanbase.
Luke uses a lot of white and primary colours combined with some more interesting gassy and deserty pastels, making extensive use of the versatile colour mixing in both types of fixture. 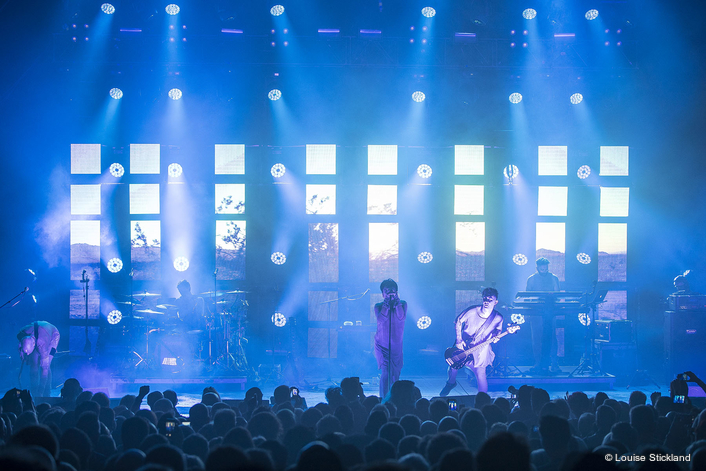 The floor package – the Robe lights and the LED panels - are being supplied by Belgian rental company Demon, based in Meerhout – Luke was brought up and spent his early career in Belgium and has a strong network of contacts there.
Luke is tech’ing it as well as running the show on an Avolites Quartz console, with an AI server taking care of the video playback.

The creative challenge in lighting this show is retaining the intense back-lit environment and keeping the base light levels low onstage, but with enough light for people to see Numan whilst retaining his undeniable enigma.
For the larger gigs on the UK leg of the tour including Brixton Academy, a ‘top’ package was supplied by PRG, which came complete with Bradley Stokes and Karl Lawton to look after and tech it.