The new Stage Entertainment Holland production of The Bodyguard has recently opened at the Beatrix Theatre in Utrecht, The Netherlands, to rave reviews, sold out houses and nightly standing ovations. The colourful, richly textured and highly entertaining performance has plenty of theatrical magic and intricate and spectacular lighting by Luc Peumans of creative practice, Painting with Light.

Luc, well known across Benelux for his innovative lighting and visual designs for theatre, live music shows and television, has worked for the producers on several other projects including ‘Dream Girls’, however this is the first time he collaborated with director Carline Brouwer.

The ambitious video set was designed by Carla Janssen Hofelt who commissioned Ad de Haan to produce the content, and together with technical director Ed Wielstra chose the material that enabled them to recreate the numerous locations required with great authenticity. 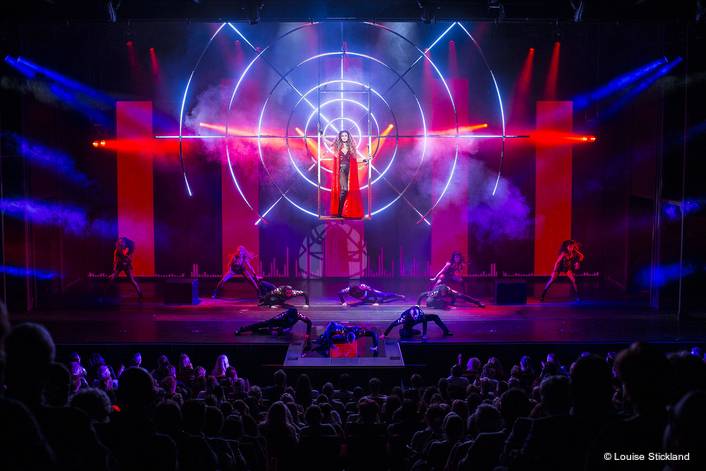 The video set – no strange environment for Luc – was therefore the main starting point for the lighting both aesthetically and practically. Set, lighting and video – literal and effects – had to work as one harmonious ‘visual’ experience and Luc really enjoyed being part of the excellent communication flow that allowed this to happen.

The creative process started as far back as February. As the story is also widely known as a successful movie starring Whitney Houston and Kevin Costner, Luc wanted to make the lighting both look theatrical and feel cinematic. 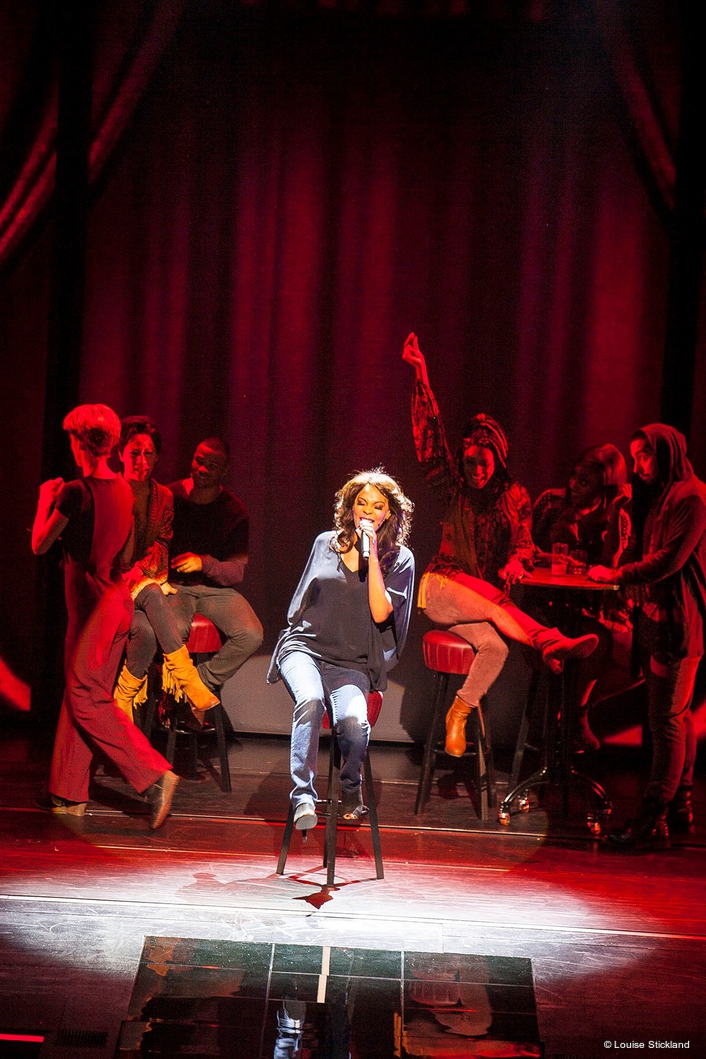 With five big flying scenic video screens and a number of set trucks also partly- covered with LED, together with LED screens along the sides of the stage … all moving up and downstage throughout the performance, it wasn’t possible to use standard lighting positions or LX bars in the main over-stage positions … so a bit of lateral thinking was needed!

Another challenge was that every light needed to have multiple options and be fully maximised to highlight theatrical action or create general atmosphere and mood … as well as the big effects and numerous WOW factors for the concert scenes. 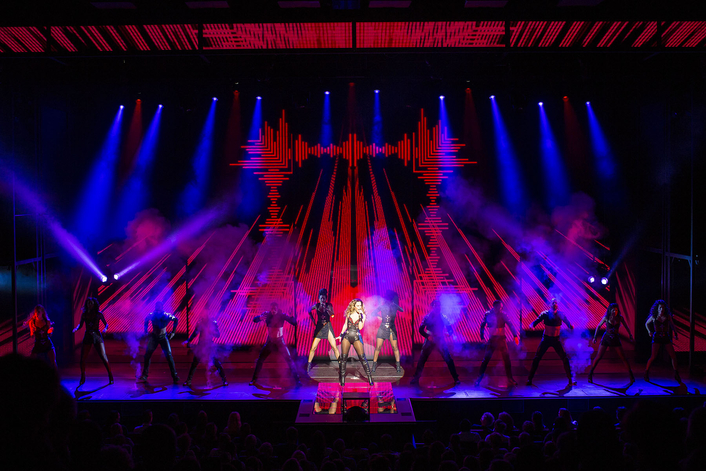 Twelve Clay Paky Mythos are hung on separate winches above the main stage areas, all attached to RSC Lightlocks, a way-cool motion stabilisation device developed for moving lights allowing them to be rigged on lightweight hanging or flown structures and remain steady.

These 16 winch-rigged lights – which also include four CP Sharpy Washes - come in and out for various scenes and can be used for close work on the actors as required. Luc found the flexibility of the multi-functional Mythos invaluable in this situation and the design takes full advantage of the powerful beam, excellent gobos and generous zoom. 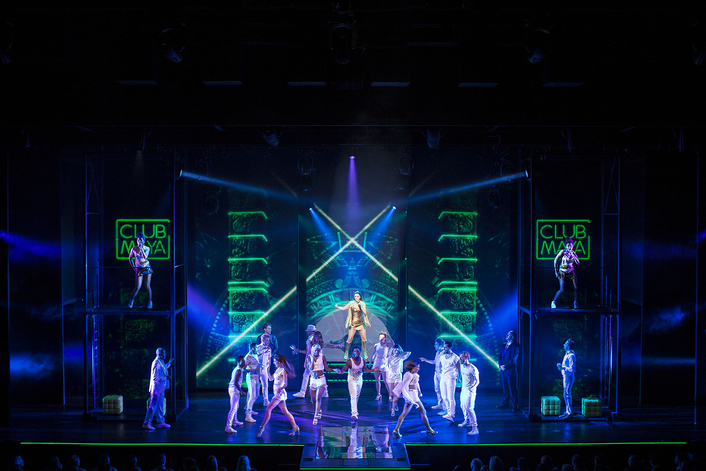 There are 23 x Vari*Lite VL3000 Spots distributed  at FOH on the balcony rails and on an advanced truss which do most of the key lighting and specials, augmented with units some rigged on side boom ladders.

There are two Mythos attached to the tops of each of the flying screens and another two on the floor.

Thirty-two more CP Sharpy Washes are dotted around on the booms, side ladders and the top of the flown screens, all used in great style for the concert scenes. 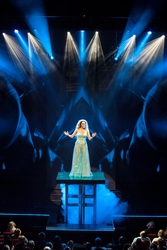 24 Fireball 1212 LED PARs have been ensconced behind the moving screens in a boom like arrangement and there are also nearly 100 ETC Source Four profiles dotted around the space, 24 with Wybron Coloram scrollers on the fronts, plus two Source Four PARs also for front lighting.

Five Robe Cyclones make an appearance in the opening concert scene, built into the stage deck, rising up on little elevators, and 11 Chauvet Geyser vertical foggers are also concealed in the show deck, all great for strategic hazing.

There is no shortage of atmospheric variety on this with two MDG Atmospheres, a Gem Glaciator and 3 x Look Solutions Viper foggers.

Luc asked Amsterdam based Invent Design to build some custom PAR 16 ‘Birdies’ fitted with Cree 6W multi-chip LED modules, and the company also made assorted LED specials for the staircases and the proscenium show portal.

The impressive target set piece that flies in during the first number - complete with lead character Rachael Marron strapped to the centre - features 77 metres of DigiFlex pixel strip, and the lighting is completed with two RJ Ivanhoe follow spots.

A grandMA console running with 5 NPUs – facilitating 20 universes of DMX - contains around 1350 detailed cues, programmed by Luc and Jeroen Opsteyn from Painting with Light during the five week rehearsal period at the theatre. Each cue was painstakingly constructed, a process achieved each time in full consultation with the scenic and video departments – so intricately are these elements linked in this show. 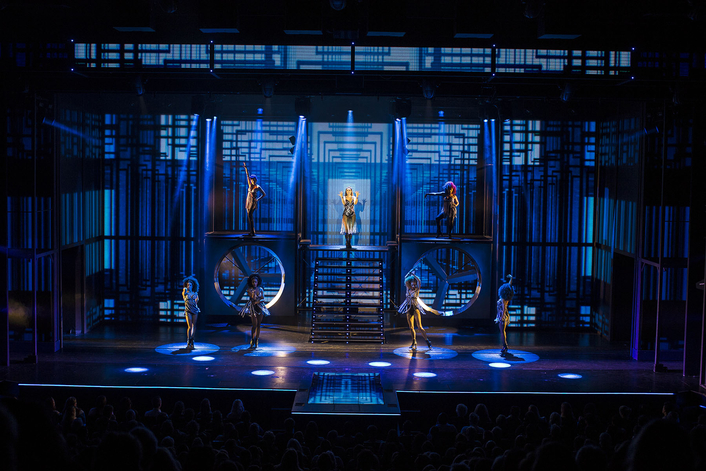 Lighting wise, it is complex because lighting is working on multiple layers - emphasising the acting, helping ramp up the many atmospheric settings and rocking out for the concert scenes. Luc has delivered it with the characteristic intelligence and passion that permeates all of his work.

Triggered by timecode received from the band’s MD Mark Kuijpers, lighting for the production run is now being overseen by Miguel Moreira. All the lighting kit is supplied by Flashlight and the lighting crew chief for the get-in was Michael Hubert.

The show is currently scheduled to run for a year until September 2016.