.
This year's Eurovision Song Contest was once again a veritable feast for the eyes with UK entry Electro Velvet's LED costumes one of the hot topics on news sites and social media across Europe. A bespoke and pioneering design by LED specialists Light Initiative, the beautiful yet robust LED took wearable tech to the next level.

"We were approached by creative director Dan Shipton and the BBC Eurovision team to help make Electro Velvet stand out during this year's performances," says Bryn Williams, creative director of Light Initiative.

Working alongside costumer designer Frank Strachan and his costume maker Natascha Stolle the team incorporated 20,000 video-mapped LEDs into the outfits with 5,500 on singer Bianca's dress alone. Unlike many incarnations of this idea seen in the past, the costume team's clever design 'seamlessly' assimilated the LED into the costumes, along with the fabric, glittering sequins and tassels, with no detriment to the overall aesthetic.

"It was of paramount importance that the costumes be beautiful," says Williams. "Often when people shoehorn LED into a costume it's just inappropriate. We wanted it to maintain the stunning look of the outfit and for it to be discrete when off, so that the big reveal had maximum impact'. 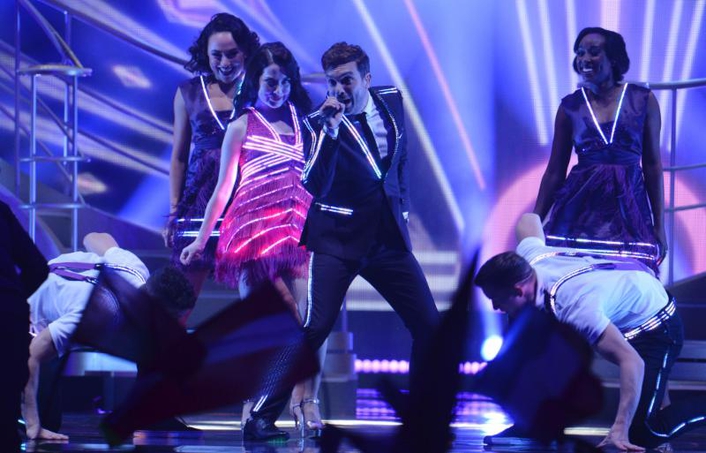 The team incorporated 20,000 video-mapped LEDs into the outfits with 5,500 on singer Bianca's dress alone

As well as looking incredibly stylish, the design of the LED was ground-breaking in its durability. Delivering this was no mean feat, as the Light Initiative team faced various time constraints and challenges in the lead up to the show.

"From the settling of requirements, we only had only two weeks to get the first costumes built before tech rehearsals began," explains Williams. "Alongside integrating the LED into the costumes, we had to create a bespoke wearable control device, like a mini media server, from scratch. This meant writing all the software and building the hardware, which was small and discrete, about the size of an iPhone with custom batteries."

Despite the quick turnaround, everything went off without a hitch on the night. Light Initiative's clever design solved the common issue of LED costumes breaking under the strain of on-stage movement. And with Electro Velvet it wasn't a case of a little shimmy here and there - the LED costumes functioned smoothly even with the backing dancers somersaulting off the set's staircases.

To really bring it all to life, tailored content for the screens and costumes was created by Potion Pictures. The costumes were then video-mapped using an Avolites Ai media server to capture a portion of this overall canvas, such that during the performance the on-stage elements became a single cohesive whole. 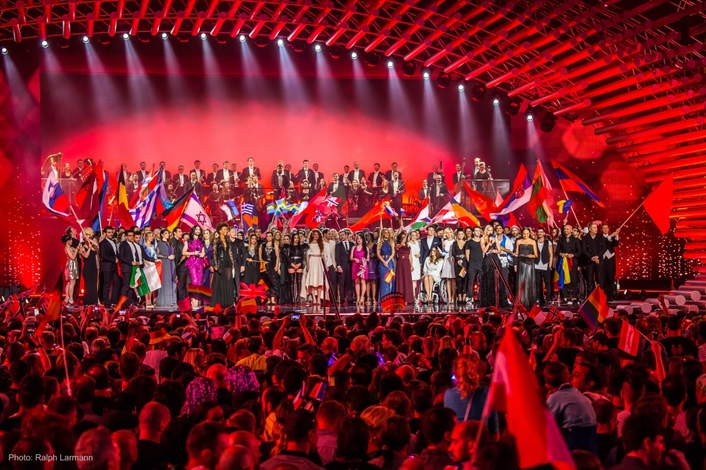 "We were nervous about the wireless environment out in Vienna, and we had to assume a really degraded radio spectrum, so any solution we came up with would need to massively reduce its dependency on radio - in the end result the system only ended up needing receipt of a single packet of 12 bytes of error corrected data to initiate an in-sync playback. To put this in context to stream data we would have needed a huge and vastly unachievable 65 universes pumped out at 35 frames per second" says Williams. "All in all, this was a major leap forward with LED and the way it is controlled".

"When coming up with the idea for the performance I wanted a surprise that would make it unforgettable," says Dan Shipton. "Light up costumes were discussed very early on in the process and so I approached Light Initiative with a tough brief and what we ended up with far surpassed what I thought would be possible. From my experiences of LED costumes in the past the tech always takes over the costume design and the end product almost ends up looking like body armour. I was determined that we would keep the softness to the garment and stay true to the Charleston style even though we would then surprise the audience. The process of working with Bryn and the LI team was yet again perfect. The willingness to brain storm ideas together and think out side of the box makes it very exciting for me as a Creative Director to work with them."

Every year around 180 million viewers tune in to the Eurovision Song Contest. This year Sweden came out on top, with its entry 'Heroes' by Måns Zelmerlöw.