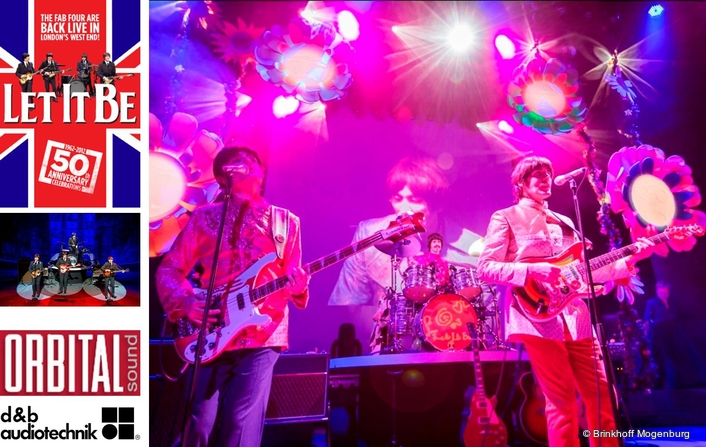 Though we might argue the paucity of proper theatre on the West End stage these days, it's rare indeed that a show presents honestly, as totally without drama. Even so, the Beatles theatrical concert Let It Be at the Prince of Wales theatre has received excellent reviews for precisely that candour.

The show's sound designer, Gareth Owen, offered a very rational explanation of why this might be, "Let It Be is very different from the typical juke box musical to which we've become accustomed; think of it more as a proper concert. There is no contrived knitting together of lyrics to weave a narrative; however it would be wrong to say it is without drama. The drama comes from the mix of a faithful live rendition of original material coupled with video footage of the band."

Owen was first approached by Producer Jamie Hendry just over a year ago; he has been working on achieving that faithful live rendition ever since. "It is very rare that anybody expects the level of detail and authenticity we're being asked for here. That's one reason why I chose the d&b V-Series." Owen selected the new d&b audiotechnik V-Series system after hearing it demonstrated by West End sound specialists Orbital Sound in the spring. "It's not what the band would have been using in their day certainly, when you see the footage from their concert at Shea Stadium you have to wonder how anybody heard anything, but I have to make it sound as faithful to the original as possible, and then translate that into how it would be today."

That may appear a contradiction, but Owen is clear in his thinking. "Take the band's digitally remastered albums, I'm doing the same thing, recreating all the effects: tape echoes, spring reverbs, old valve compressors, but with contemporary digital equipment. The band we have are very good and getting them to sound good on stage is relatively easy, these guys are musicians first, actors second, yet to make them sound exactly like the Beatles is tricky."

You only have to study one or two of Sir George Martin's epoch making Beatles recordings to know there are many production touches to bring that sense of authenticity and Owen was grateful for assistance in his research, "Joey Curatolo the Director and Musical Supervisor is a walking Beatles encyclopaedia; he's really helped in getting to know the Beatles material intimately. I knew it all, but I'd never sat down and deconstructed it."

For Owen the defining demand on his choice of technology comes in the delivery, "The Prince of Wales is a wide theatre and not so deep, a nice room for this type of show actually. There are multiple screens on stage so the PA rigging positions have been pushed way off stage, and that's where the system comes into its own.  I can cover the whole audience area with the V-Series using left/right hangs for the stalls, comprising four V12 and two V8 at the top of the hang along with eight V-SUB and for the circle level two V12 and four V8 at the top with four V-SUB. A full mix in a centre three way cluster of d&b Q7 is used to drag the musical image into the centre. That's one of the advantages of the d&b systems; they always have very consistent voicing between their different Series of loudspeakers so mixing them together in a design like this is not a problem. A proper understanding of how to setup the system is required or course; something you can always rely on from Orbital, their service is faultless. The V-Series also faithfully articulates all those little production touches that characterise the music, and at real concert levels." And that's something no one got to experience fifty years ago.