Lectrosonics Wireless Technology Key to Production of "Oprah's Next Chapter" 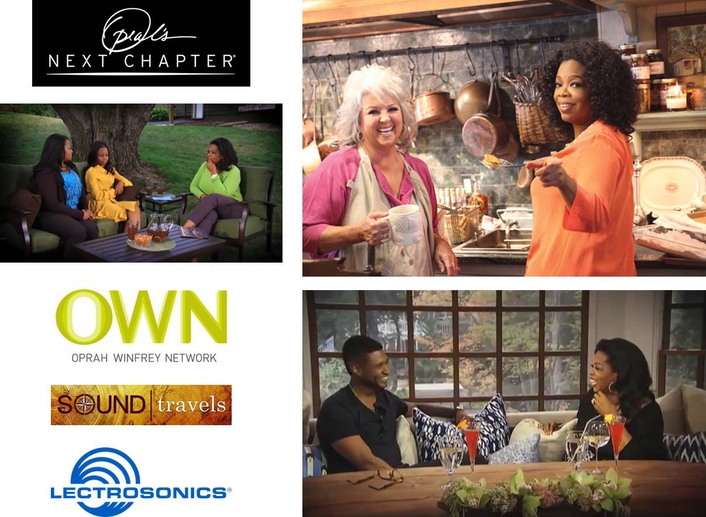 Audio quality, RF agility, and dropout-free performance keep production on track
For location sound professionals, few things are more catastrophic than equipment failures. Such occurrences not only hinder production, it puts the equipment operators in the extremely uncomfortable position of being responsible for the delays—and this can cost someone their job. Knowing “you’re only as good as your last successful project,” the location sound crew behind the scenes of “Oprah's Next Chapter”—the immensely popular primetime television show on The Oprah Winfrey Network—relies on Digital Hybrid Wireless® Technology from Rio Rancho NM-based Lectrosonics.

Chicago-based freelance location sound mixer Matt Vogel is one of the principal sound engineers on the program, and reports that Lectrosonics equipment is used extensively in the production of the show. “We use a lot of Lectrosonics gear to make the show happen,” Vogel said. “Our talent mics are a combination of SMQV and UM400a transmitters in conjunction with SRb receivers.  I’m a fan of the small size, low power consumption, and solid performance of the SRb’s, and confidently use them in my bag now. For camera links, we use a combination of SRb slot mount receivers and UCR411a compact receivers with UM400a transmitters. And our IFB feeds are all Lectrosonics R1A receivers being fed by a single UM400a transmitter.”

“The show’s production is actually quite challenging from an audio perspective,” Vogel explained.  “There is a good amount of behind the scenes activity being shot in addition to the sit down interviews. Each shoot consists of multiple ENG cameras, on sticks as well as handheld for breakaways or walk and talks. On larger shoots, we’ll add another mixer with additional wireless. With up to eight talent mics, several hidden backup plant mics, twenty IFBs, wireless mixes to 8 cameras, and no space to hang a boom, we chose to go completely wireless for the series.”

When queried about the extensive use of the Lectrosonics SRb slot mount receivers, Vogel offered the following, “The compact size of the SRb receivers and their ability to be powered by L mount batteries makes them an ideal wireless option for our smaller handheld cameras. I have several Lectrosonics SR sleds that mount to the hot shoe adapters on the Canon C300s, which makes the cameramen happy because they don’t have a bulky wireless setup on their camera rigs.”

Vogel was quick to point out that, because Lectrosonics wireless microphone technology is so prevalent among those working in the broadcast community, it makes his location work considerably less stressful. “I typically use local A2s in the cities that we travel to,” he said, “and if it’s a big enough shoot with multiple locations and multiple talent mics, I’ll often tap into their kits and use their wireless systems as well. Finding mixers with complementary blocks of Lectrosonics gear to mine is surprisingly easy, and saves me time from calling multiple rental houses to bring in the gear we need for the shoot. Using matching Lectrosonics gear is critical because I will send an A2 ahead to a location to pre-mic talent for when we arrive. When I show up on the new set, my A2 has already set and listened to everyone’s mic, I dial in that particular talent's frequency, and we're good to go without wasting time.”

The Lectrosonics RM remote is another tool that Vogel finds indispensable, “We typically film behind-the-scenes moments of celebrities getting ready for their interview and that usually includes my placing of microphones on the talent. Since the cameras are already rolling before I get microphones set, it’s difficult and impractical to get back to a deeply hidden transmitter if I need to make adjustments after we’re underway. This is where the RM Remote becomes invaluable. While the crew is doing a last second hair and makeup or lighting check, I can pop in and quickly adjust gain, frequencies, and even boost power output settings without disrupting anyone.”

As he prepared for the upcoming day’s shoot, Vogel offered these final thoughts about his Lectrosonics equipment, “Lectrosonics offers everything you’d expect from a professional wireless product... amazing audio quality, superior RF agility, dropout-free performance, and great range. I've always been a fan of Lectrosonics’ durability. The transmitters and receivers are built like tanks. A mixer's gear is unfortunately susceptible to being tossed around minivans and airplane cargo holds—not to mention being dropped by talent. I don't have time for a flimsy plastic wireless device to break and go down while I’m in the field. I need my audio gear to be nearly indestructible—and Lectrosonics fits that bill.”