Lawo leads The Pirates of the Caribbean into Strasbourg! 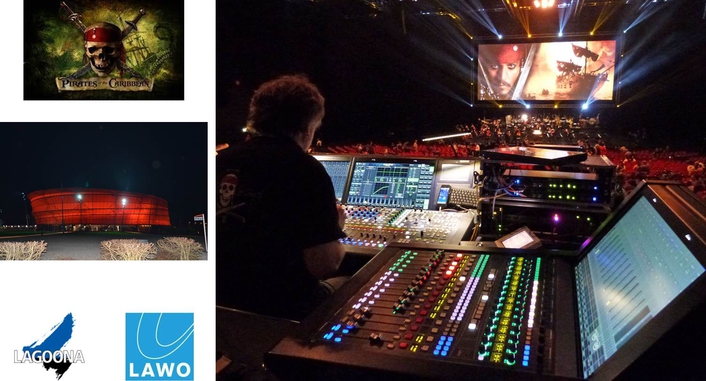 The Zenith de Strasbourg was packed to the rafters for this spectacular one-off event
The Zenith de Strasbourg recently played host to a magnificent cine-concert of the first film of Disney’s hit Pirates of the Caribbean series, The Curse of The Black Pearl. The film was screened in front of 6000 people to the accompaniment of the Strasbourg Philharmonic Orchestra complete with a 24-strong choir who brought Klaus Badelt’s magnificent soundtrack to life.

The Zenith de Strasbourg, which is the biggest indoor arena in France was packed to the rafters for this spectacular one-off event. Strasbourg-based rental company, Lagoona, were brought in to supply the PA system, and Lagoona in turn, called on digital audio networking specialists, Espace Concept, to supply and manage the FoH console, microphones and networking. For the very first time, Espace Concept used an mc256 console from Lawo.

The suggestion came directly from Lawo’s Hervé de Caro to whom Espace Concept’s Alain Roy turned for advice as to how best to network his trusted Eclipse GT consoles from Innovason to enable him to record 124 channels.  “Hervé suggested that we use an mc256 from Lawo instead as everything could then be managed from just one control surface,” explained Roy. “It seemed like the ideal opportunity, so I agreed.” The resulting system comprised a 32-fader mc256 with a 16-fader extension, connected via fibre optic cable to two Lawo DALLIS interface boxes on stage which provided 72 mic inputs and 16 monitor outputs, plus two Innovason DioMadiES MADI-to-EtherSound converters for the 60 digital microphones connected to the console via EtherSound over fibre.

In order to provide Alain Roy, who mixed and recorded the entire event, with a console on which he would feel completely comfortable and at ease, de Caro and the Lawo team then set about configuring the mc²56 to meet all Alain’s requirements “Alain is one of France’s foremost experts in digital technology and digital networking for live shows, ” said de Caro. “Given that this was the first time he’d even seen an mc256, let alone used one, we felt that the best approach was to simply set up the mc256 with all those features Alain is familiar with from the Eclipse. By the time we’d finished, Alain had his SmartFad functionality for VCA allocation and control; Broadway mode for seamless switching between live sound and playback; Virtual Soundcheck for fine-tuning the mix without the musicians having to be present; a digital multitrack recorder with now 128 channels instead of 64, and all with full visualisation and control from the central touchscreen of the console. Furthermore, we set up the Pandora functionality for creating a natural stereo image for all the audience.”

Roy, for his part, was more than impressed: “Eclipse is special precisely because it is so configurable and you can create whatever you want based on the requirements of the show or the desires of the operator. What completely took my breath away with the mc256 was that the console is every bit as configurable, but it takes place at a completely different level – within the operating system of the console itself – which ultimately gives you even more options and even more flexibility.”

“I only started using the console on the Friday morning once it was installed in the Zenith,” he continued. “I hadn’t really taken part at all in the setup/configuration phase other than to say what I wanted, and frankly I wasn’t looking forward to it! But once I actually got down to work, within no time at all, I had completely forgotten that I was using a brand new console – it was unbelievably transparent to use, it sounded fantastic and I loved the extra power and redundancy. All the functionality that I had asked for was right there and plenty more besides, and everything just worked perfectly. Often, it feels as if a new console is an obstacle between you and the sound until you get used to it and learn how to get the best out of it. In this case, it was as if the console simply ‘disappeared’ right from the outset - I didn’t think about it once, I just got on with my job of producing the best possible sound … Pretty amazing, really!”

As shows go, this was a pretty complex one with a full philharmonic orchestra, a 24-piece choir, 124 inputs including 60 digital microphones AND all synchronised to the film. To cap it all, monitors were also being run from FoH, yet according to Alain Roy, thanks to the huge capacity of the console, and the Lawo support in configuring the console in advance, it couldn’t have been easier on the night. “The audience was treated to a real audio-visual feast – it looked good, and sounded amazing, and for my part, I can’t wait to get back behind an mc²56!”