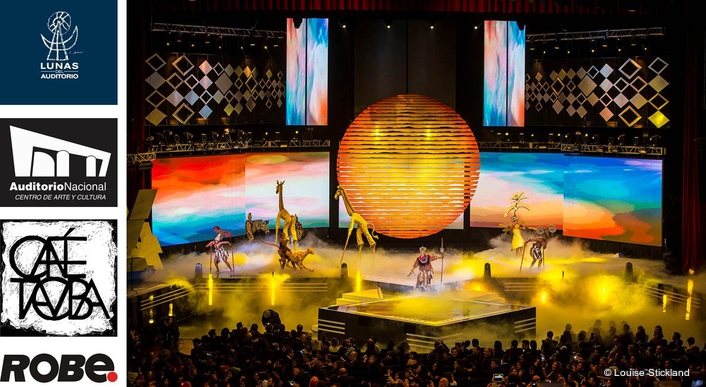 The striking lighting design was created by German 'Tiffy' Castellanos and the equipment was supplied by LED Project, both based in the vibrant metropolis of DF. 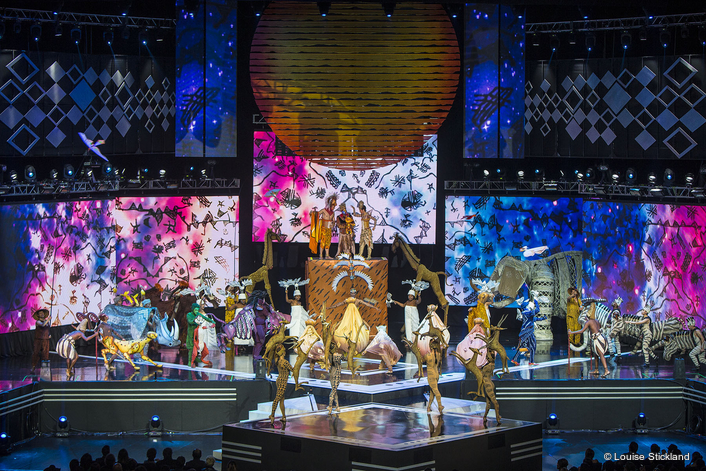 A glittering array of the great, the good and the glorious from the Mexican and Latin American world of show business and entertainment rocked the red carpet, and worldwide industry talent lined up to collect the coveted awards. It is the only event in Mexico to be broadcast live across the main three TV channels as well as being live streamed over the internet via You Tube to maximise its reach.

For one person - Sergio Serrano, owner of LED Project - it was also a personal triumph in that the leading rental company won the Lunas contract for the first time, an achievement making him bristle with pride.

A great champion of Robe products for the last two years, Sergio commented: "It was a great honour to be there and to see such a spectacular lighting design using a dynamic combination of nothing more than Robe moving light products". 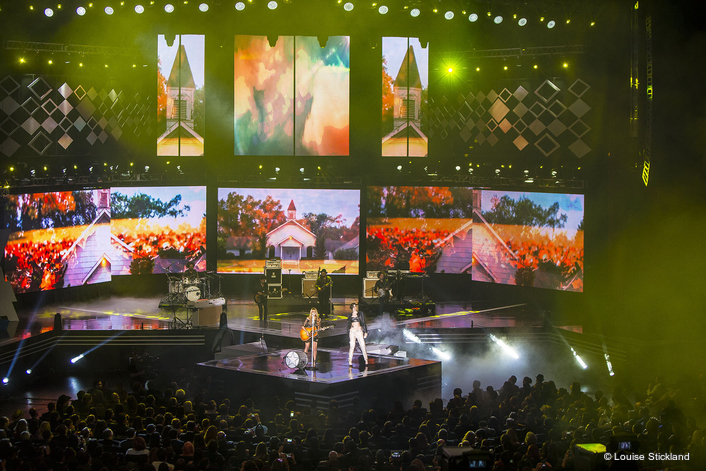 Tiffy, a top Mexican LD who also works extensively in the US and internationally, is known for his innovative approach and for thinking 'out-of-the-box’. It was his seventh time designing lights for Las Lunas, a process that evolved working in close conjunction with set designer Mauricio Chacón and video content producer Iván Trujillo.

Eight diverse live acts and special artist collaborations appeared live onstage throughout the evening as the 21 categories’ nominees were announced and the winners awarded. The numerous imaginative challenges were ensuring each production section looked amazing, that the very excited 10,000 audience packing the Auditorio had a great evening and that the cameras could capture all the action for the massive TV and online audiences.

Custom video content was created for each of these live segments and Tiffy - who is also a big Robe fan - used this as a starting point for the lighting.

"I matched components like colour and also the look, feel and mood of the movies, each of which told a story to accompany the song - whether a ballad or a full on rock-out. These narratives were accented by the visuals supporting the music," he explained. 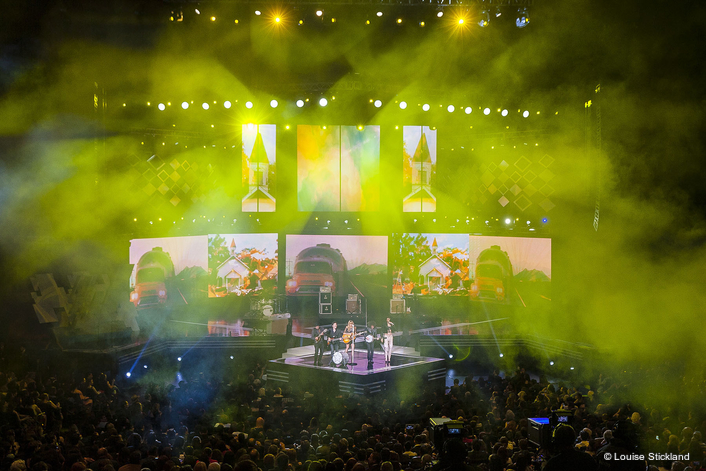 The BMFL Spots were placed on two trusses flown above the front section of audience and used to sweep around the entire venue, creating some great wide camera shot looks.

Tiffy used them for the first time last year - shortly after their launch - for Cafe Tacvba, one of the most famous Mexican bands for which he is also the LD. Sergio Serrano - who was production managing the band at the time – also helped set this up, as LED Project was the first company in Mexico to purchase BMFLs.

"I love the sheer power of the BMFL, the speed of the fixture and the great gobos," Tiffy enthusiastically explained, adding it was fundamental to this design to draw the audience into action and make them feel part of the show. Therefore, these BMFLs played a crucial role.

However, his favourite Robe product of all time – to date - is still the Pointe, which he started using last year with Cafe Tacvba. "It’s an incredible fixture!” he declares, “it can do everything you need … and it’s small, light and neat enough to be fitted into any space".

On Las Lunas, the Pointes were rigged on trussing frames in between the eight onstage LED screens and also on one of the mid over-stage trusses, where they worked across the whole space. 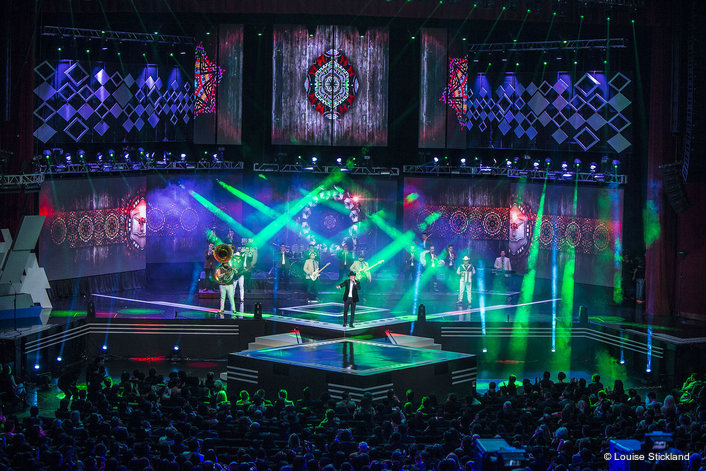 It was the first time he'd used LEDBeam 1000s, and these were also on a mid-truss, being used for washing the main performance area and sweeping out into the audience. He was impressed with the intensity, colour mixing and the way the luminaires work as very efficient and intense wash lights.

LED Project was also the first rental company in Mexico to add LEDBeam 1000s to their stock. Sergio likes being a market trailblazer and this policy has paid off fabulously in helping grow his business as well as generating a lot of additional sales for Robe and positioning the brand in Mexico.

The LEDBeam 300s were dispersed around the multiple over-stage trusses and used to cover specific areas like the awarded nominees’ podium and the presenters’ stage.

The CycFX 8s provided footlights for the presenters’ stage with another row of them washing down onto the same area from a small curved truss above. It was Tiffy's first experience with these as well, prompting him to say he’d like to get his hands on about 100 for a gig … to have some serious fun!

The 12 x MMX spots were positioned on one of the over-stage trusses and used for back lighting the bands, the winners during their acceptance speeches, the presenters and for texturing the floor. "They are strong and bright, a very elegant luminaire; I love the CMY mixing," Tiffy said.

He ran all the show’s moving lights from his ChamSys MQ100 console and additional generic house lighting was run by the venue's head of lighting, Jorge Ríos.

Executive Producer Patricia Fuentes chose to work with LED Project, selected from some fierce competition. The moment everything was confirmed, Sergio realized it would be an ideal chance to “show that Robe fixtures could shine". 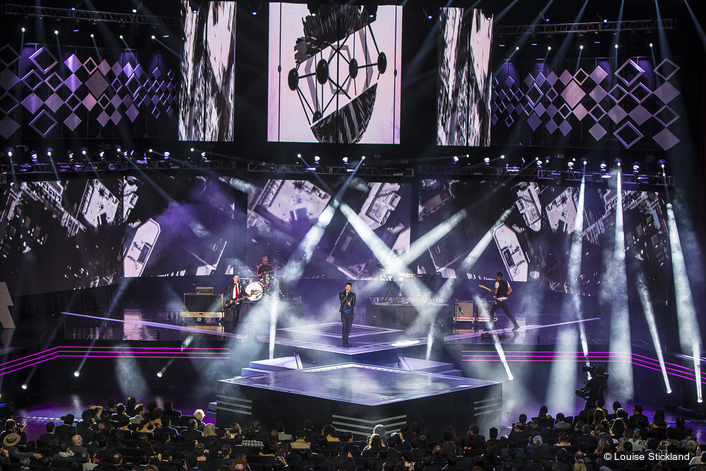 LED project is currently the Mexican rental company with the most Robe fixtures in stock and with Sergio being a high profile industry player, this investment has added kudos to the brand.

This has been coupled with the energetic work of Robe’s very proactive Mexican distributor Vari Internacional, who started with Robe four years ago and are on the process of transforming the face of the rental market and helping to create an authentic Robe buzz.

Sergio reckons that Robe is the moving light brand that everyone wants to use right now and the Pointe in particular is perfect for the Mexican market, as well as having companies initially investing in Pointes that are now looking at other Robe options.

The process of growth has many interlinked strands. Tiffy as an LD thinks the increased availability of Robe is self-fuelling the process of both specifications on one hand and rental company investments on the other.  He himself has been a big believer in the reliability since his first gig using ColorSpot and ColorWashes … many years ago, when only one rental company in the country had Robe!

Back to the gig, and in addition to everything in the arena, illuminating the red carpet and the VIP mingling areas, as well as the press photo wall outside Auditorio Nacional, there were 24 x LEDBeam 100s plus MMX WashBeams, miniPointes, MiniMes projecting the sponsor logos around ...  and CitySkape Xtremes. 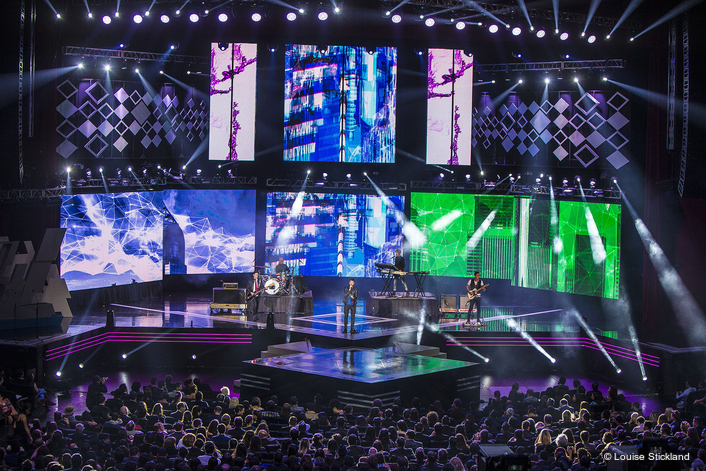 After such an important event, the Las Lunas del Auditorio awarded artists and invited celebrities headed off into the night to numerous after-shows. Social channels filled up with positive comments and feedback about the 2015 production, being hailed as one of the best ones.

We'd like to think that had a little bit to do with Tiffy, Sergio and all the hardworking LED Project crew, among the excellent technical support from Vari, that was involved in making this element rock! 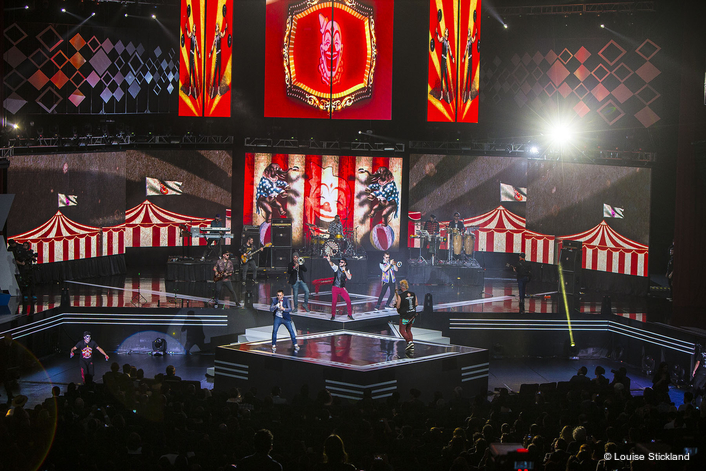