Lady Gaga Shoots for RTL II at the Coloneum 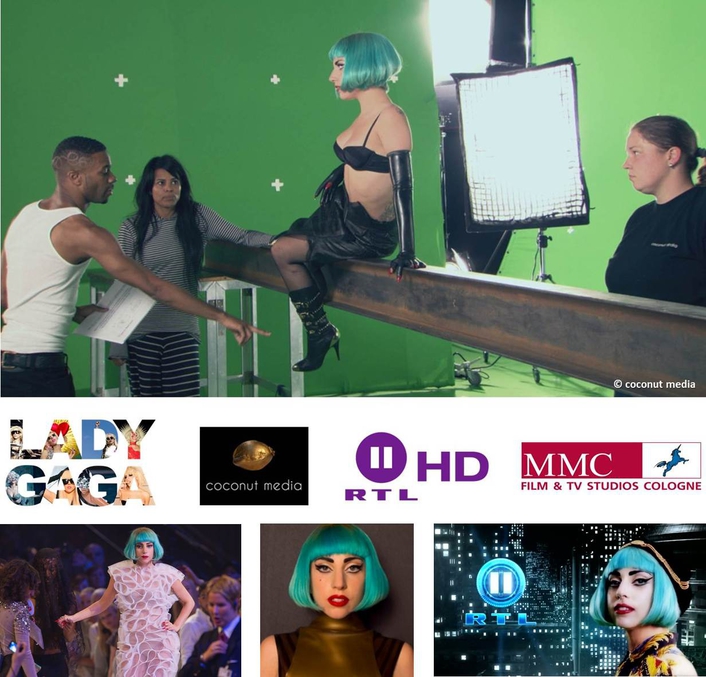 The winner of five Grammys, Stefani Germanotta (alias Lady Gaga) benefits RTL II like no other international music star. Probably the most influential personality in the world of pop, she has been involved in many marketing campaigns for the TV station.

As another step in the successful partnership between RTL II and Lady Gaga, several new RTL II station IDs were produced at the MMC studios on June 8th, 2011. The project was produced by coconut media (Cologne) on behalf of the agency Leitwerk Medien (Munich) and RTL II.

In these new station ID’s, which can be seen on RTL II since October 14th, 2011, Lady Gaga performs in a breathtaking urban world of images that was inspired by movie classics, such as Metropolis, Sin City, and 2046.

In all station IDs, the superstar interacts with the new 3D logo of RTL II. Whether on a futuristic bike, with an UFO or in a hamster wheel, there is a basic theme to all of them: Lady Gaga electrifies the RTL II logo.

RTL II’s overall project manager for marketing and communications, Carsten Molis, was very satisfied with the shooting and the result. The same was true of coconut media’s producer, Heike Weiller, who expressed her gratitude for the excellent cooperation with MMC.