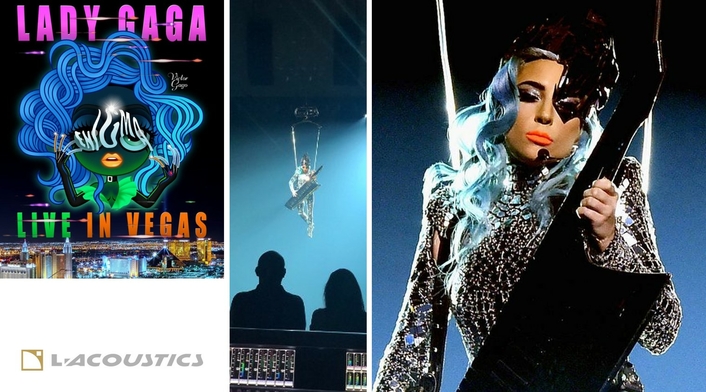 With nine GRAMMY Awards and three Brit Awards to her name, plus both an Academy Award and Golden Globe Award for “Shallow” from 2018’s A Star is Born, Lady Gaga is a multi-faceted superstar entertainer. Few contemporary musical artists possess her genre-bending creative vision and tireless performance drive. So it probably should have come as little surprise when, at the turn of the year, she kicked off not one, but two, multi-year Las Vegas residencies at Park Theater at Park MGM, both of which are presented in L-ISA Immersive Hyperreal Sound technology from L-Acoustics.

Lady Gaga’s first show, Enigma, which has now completed 18 sold-out performances to rave reviews, is a nonstop, eye-popping spectacle taking its 5,200 audience members on a full-throttle, futuristic odyssey through two hours of her club classics like “Poker Face,” “Paparazzi” and “Born This Way.” Backed up by a tight five-piece band and a dozen dancers, Gaga rarely takes a breather during the show, owning the Park Theater’s 135-foot-wide stage, and even flying over the audience at several points.

Her second show, Jazz & Piano, is a glitzy return to classic Las Vegas style with the artist accompanied by a full big band complete with string section. Alternating between stripped down solo piano and vocal arrangements of her pop numbers and swinging orchestral versions of Great American Songbook staples like “Luck Be a Lady,” “Fly Me to the Moon” and “The Lady Is a Tramp,” her five intimate Jazz & Piano performances to date have truly allowed Gaga’s emotion, humor, talent and showmanship to shine.

Although the two productions could hardly be more different in terms of design and execution, the sound technology remains the same, underscoring the ability of L-ISA to enhance all types of music. The L-ISA configuration is made up of K Series long throw enclosures. Three central arrays each comprised of 12 K2 are flanked by two 13-enclosure Kara arrays on each side, while outfill arrays of 12 K2 are positioned between each of the two Kara hangs to address the far left and right seating sections. The proscenium rig is rounded out by a dozen KS28 subs centrally flown in two cardioid hangs of six enclosures and bolstered by a linear horizontal arrangement of 10 SB28 located under the stage lip.

Front-fill is delivered by a dozen X8 and two X12 short throw enclosures, with a special side audience area covered by two medium throw Syva and a single Syva Low. Twenty additional X8 and 18 X12 are placed throughout the venue to provide 360° surround audio. Elevation reinforcement is accomplished via a combination of 22 ARCS WiFo medium throw enclosures that are split between an LCR array above the main house seating and five zones over the rear upper balcony that are fed a combination of the LCR signals. All systems are powered by 24 LA12X, 12 LA8 and 12 LA4X amplified controllers. 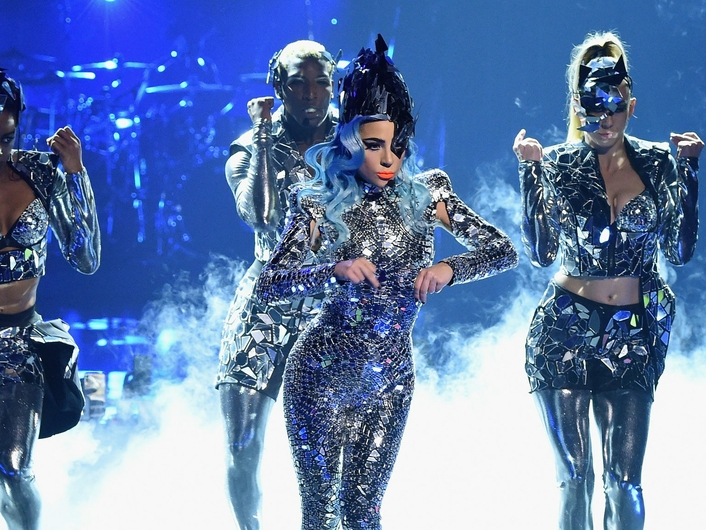 At the FOH mix position, a DiGiCo SD7 console interfaces with the intuitive L-ISA Controller software, which enables object-based mixing and spatialization using the L-ISA Processor.

The seeds to use L-ISA technology for Lady Gaga’s production were first planted when FOH Engineer Paul Ramsay initially experienced it back in March of last year. Ramsay later introduced David Brooks of L-Acoustics to Production Manager Chris Vineyard and Digital Audio Programmer and Playback Engineer André Bowman who both visited the L-ISA Studio in Westlake Village, California for a demo. Greatly impressed with what they heard there, Music Director Michael Beardon was brought in, and then Vineyard and Beardon took the idea to use L-ISA back to Lady Gaga who signed off on it.

The Park Theater already boasted a Solotech-installed K Series installation, comprised of 32 K2, plus a number of Kara, subs and amplified controllers. Solotech was again called upon to provide the additional enclosures necessary for Gaga’s shows, while Eighth Day Sound furnished the FOH control package.

Marcus Ross, L-Acoustics Head of Application, Touring - USA & Canada, is enthusiastic in his praise for both Lady Gaga and her production team. “Lady Gaga’s shows are wonderfully wide and immersive sounding,” he says. “Her FOH engineer, Paul Ramsay, spent a lot of time setting up his panorama early on in the mix process, and it sounds very, very impressive.”

Ross notes that both Enigma and Jazz & Piano are each utilizing a full complement of 96 objects in L-ISA, and the I/O paths connected to the FOH DiGiCo SD7 are well into the triple digits. With only a five-piece band on stage—drums, bass, keys, and two guitars—backing stems are used for Enigma, but ultimately the mix is very live-centric. “Paul makes great use of the live instruments and uses the L-ISA Controller snapshots liberally along with timeline automation to control objects, width, pan, depth—all of the parameters, really,” Ross shares. “He’s also been able to get some really fantastic guitar tones out of the rig.” 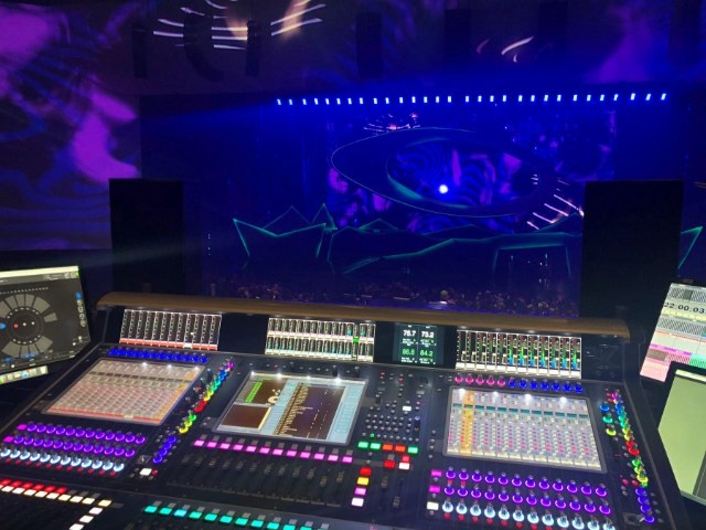 And there’s no shortage of exciting moments throughout Enigma. “Lady Gaga is all over the room—from making her grand entrance by descending from the ceiling playing a keytar, to riding atop a giant mechanical robot, to floating out over the audience on a round gyroscope-like platform. While her voice is always kept front and center in the mix, other sonic elements are constantly being moved around the room in a very immersive way.”

When switching over for Jazz & Piano, the system remains the same, but it’s driven in a slightly different way. “L-ISA technology allows us to alter the low frequency profile easily to accommodate for the difference in musical styles; we lower the sub profile so it has a bit less impact to better suit the acoustic instruments and genre,” explains Ross. “With the jazz repertoire in particular, the intelligibility that L-ISA delivers allows every nuance of Lady Gaga’s expressive vocals to be perfectly clear and intimate. And the same goes for her performance of ‘Shallow’ in the encore of her pop show. It creates an experience that is so absolutely personal for everyone in the room.” 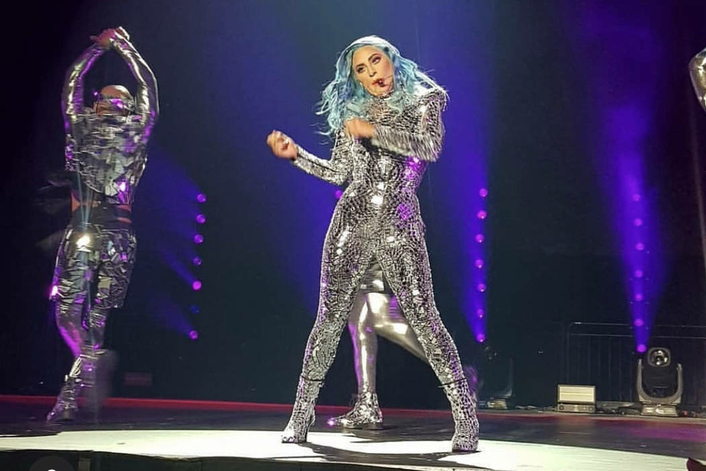 Reviews of from audiences and press alike have both been glowing, especially for Enigma. According to Variety, “She and ‘Born This Way’ were both born to be in Vegas, and to raise the bar for superstar residencies just a little bit higher.” And Rolling Stone stated, “For a show that at first seemed like an excuse to remind us what Gaga is best at, it ended up becoming a show that confirms and begins her legacy.”

“Lady Gaga is without a doubt one of the most creative and influential pop artists in the world today,” adds L-Acoustics CEO Laurent Vaissié. “Her ambitious vision for this double residency, supported by a superb creative and production team, was a perfect fit for L-ISA technology. It has been a privilege to be part of the team and, along with Solotech and MGM, enable the audience at the Park Theater to experience both her pop and jazz shows in such a powerful and emotional way. We are pleased that L-ISA has been a part of these extraordinary productions.”

Currently on a break for the summer months, Lady Gaga will return to the Park Theater in October to continue her planned multi-year residency. For more details on the two shows, visit https://parkmgm.mgmresorts.com/en/entertainment/lady-gaga.html. Solotech and Eighth Day Sound can also both be found online at www.solotech.comand www.8thdaysound.com, respectively.