Lady Antebellum Owns The Night and the Stage With Soundcraft Vi6

Lady Antebellum, an American country pop group formed in 2006 in Nashville, Tennessee, consists of Charles Kelley on vocals, Dave Haywood with background vocals, guitar and piano, and Hillary Scott who sings lead and background vocals. The group has won seven GRAMMY Awards, including the 2012 Best Country Album for Own The Night.

Sound Image, which has enjoyed great success with HARMAN and Soundcraft throughout the years, chose a Vi6 as the monitor console for its sonic quality and ease of use. Peter Bowman, Monitor Engineer for Lady Antebellum, was new to the Soundcraft Vi6 when he first started the tour, but has quickly adapted. “I didn’t care about a learning curve,” he stated. “If it sounds better I’ll go with it. But it also didn’t take long to become familiar with the console.”

Bowman uses the console for stage monitoring, in-ear mixes, wedges and matrixes. “Everything is packaged well,” Bowman said. “There is no effort needed to get great sound. The double patching capability lets me double up on a lot of outputs, adding even more flexibility.”

With so much varied talent in Lady Antebellum, the console perfectly fits Bowman’s needs to adjust settings quickly. “Everything is easy to set during sound check and little adjustments can be made quickly on the fly when needed,” he noted. “The console displays two user-defined auxiliary outputs on each channel, which along with fader flip mode allows me to see and change all three of the principles mixes at once.”

For Bowman, having the Lexicon® effects onboard only adds to the value of the desk, and setting the different layers with inputs makes it easy for some of Lady Antebellum’s acoustic sets. “I can jump between user pages quickly, and having them in my set order helps me to know where everything is based on the inputs for a given song. Nothing is ever too complicated.” 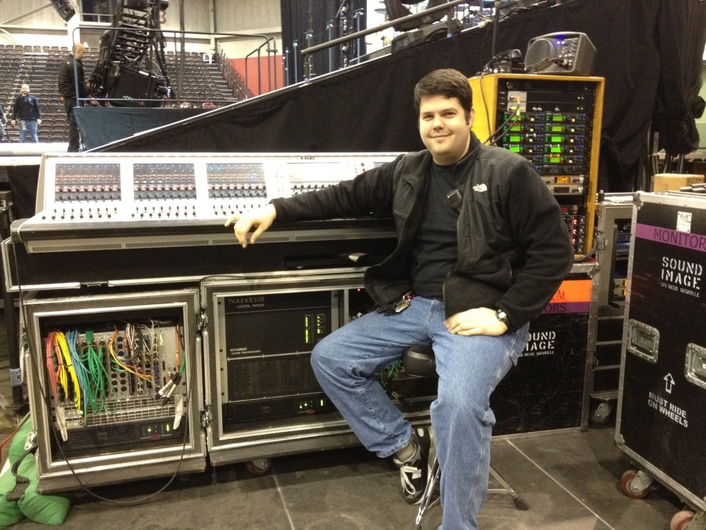 “The touchscreen is always easy to navigate and makes transitions simple,” Bowman added. “With selectable recall parameters, I am able to use scenes effectively. I can set EQs and gains to follow the scene or be fixed, depending on whether I need changes made throughout the show to remain from scene to scene or not.”

The support that Bowman and his team have received throughout the tour is only a motivator to stay with Soundcraft. “We had some terrible weather, which damaged the first console. The assistance in getting us a new console and back up and running couldn’t have gone better. We didn’t miss a beat.”