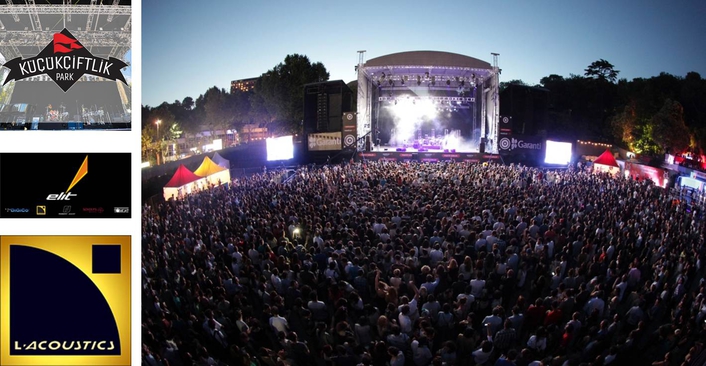 Maçka KüçükÇiftlik Park
One of the most active venues of this season was undoubtedly Maçka KüçükÇiftlik Park which is located just at the center of Istanbul city. In addition to renovating its’ stage and side area they also technically upgraded their equipment park in the name of more artist-friendly setup.

As an open air concert and event venue with capacity of 17.ooo and settled through an area of 9350 m2,  KüçükÇiftlik Park installed L-Acoustics K1 sound systems to it’s main stage, which is the only K1 sound system in Turkey.

Starting from May 2012 with MultiSound Festival , KüçükÇiftlik Park has hosted to amazing performances of world-known artists, like Jessie J, Duran Duran, Tony Bennett, Pitbull, Stevie Wonder and grand festivals such as High-Voltage with their new L-Acoustics K1 systems which is the choice of legends like Radiohead, Red Hot Chilli Peppers.

The sound quality and the performance of the sound system have turned KüçükÇiftlik Park into a venue, which is technically, locationally, and also organizationally the most requested venue for grand events and concerts.The venue is preparing for hosting to more events in the following days, such as, Scorpions, Enrique Iglesias, Steve Vai in addition to music festivals such as Urban Festival, Eksen On Fair…