The crowd gasped when Foo Fighters frontman Dave Grohl toppled offstage during a show on June 12 in Gothenburg, Sweden. Grohl, however, quickly showed the single-minded perseverance that has led him to success in music and documentary filmmaking. Shortly after being helped off stage for medical attention, he was back in front of the crowd—seated this time—singing and playing guitar while a doctor held his leg in place.

A dedicated performer who literally lives the phrase “the show must go on,” Grohl and his bandmates are now on the 43-date North American leg of their Sonic Highways tour, which “kicked off”—with the singer/guitarist seated on a massive motorized throne—July 4 at Washington, D.C.’s RFK Stadium. Accompanying the band on this latest stretch running through November is an L-Acoustics K1/K2 PA system fielded by Delicate Productions, which has been Foo Fighters’ SR vendor for the past five years. 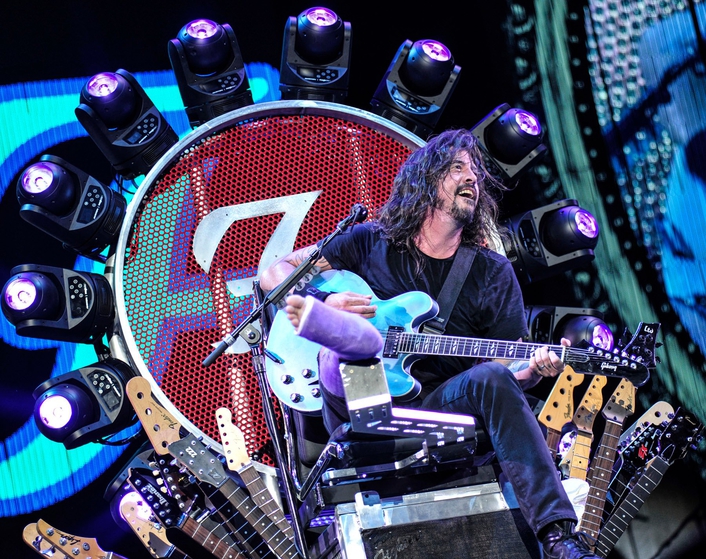 “We have partnered with Winston-Salem, North Carolina-based Special Event Services (SES) for the K1 enclosures,” says President Jason Alt, noting that Delicate has taken the same approach for tours in the past based on the broad acceptance of L-Acoustics’ K1 system. In fact, Alt’s success with K1 prompted him to order a K2 system for his own company.

Now, as Foo Fighters head out to play the remainder of their tour, the system’s main hangs used for stadium dates consist of 16 K1 enclosures atop four K2 down enclosures per side, buttressed by either three delay towers using 16 K2s or two towers using 20 K2s, depending on the layout of the venue. In arenas, the system is slightly scaled back, with 14 K1 enclosures atop four K2 down boxes, 12 more K2 for out fill arrays, five Kara enclosures for front fill across the stage lip, and Kara and ARCS boxes for side fills. A total of 42 SB28 subs are deployed for the stadium shows and 14 for the arena system configuration. These are stacked, as per Foo Fighters’ longtime FOH mixer Bryan Worthen’s preference. LA8 amplified controllers housed in 12 LA-RAKs power and process all systems.

With Delicate Productions taking delivery of the K2 boxes at the end of June, Alt says it feels good to be part of the L-Acoustics “family.” “The way we had been doing it in the past had been part of a strategy that saw us invest in other directions,” he says, explaining how sub-renting the L-Acoustics systems had enabled them to balance themselves in the larger ecosystem of tour sound. “It created some important strategic relationships with other companies. But it was a good time to make the move with the K2. Not just for the band, but because of L-Acoustics’ market acceptability, which was the main reason—it’s the number-one name we see on riders now.” 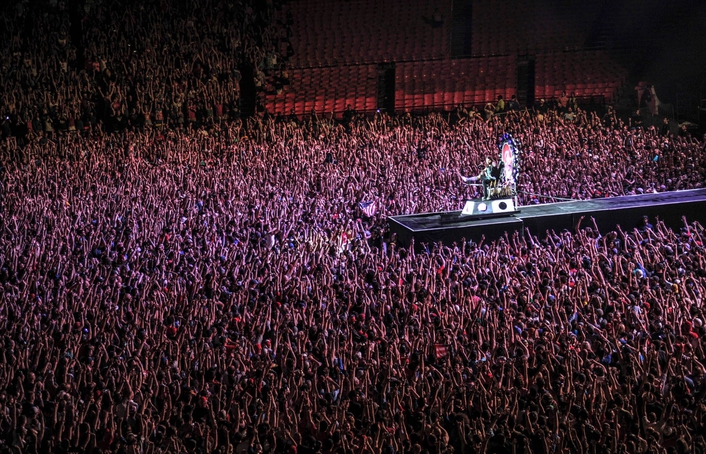 Alt describes the K2 acquisition as a strategic advantage, citing the fact that the K2 delivers the K1 sonic signature in a smaller, lighter form factor, which reduces transportation costs. “That’s also going to be important for corporate shows, which make up the next largest part of our business,” says Alt, who adds that clients had been asking about the availability of the K2s even before they arrived at his warehouse. “It’s going to be a very busy system,” he says. “It’s turning out to be a very promising investment.”

As for Foo Fighters’ opening show in D.C., which celebrated the 20th anniversary of the band’s debut album and followed sets from Buddy Guy, Gary Clark Jr., Heart, Joan Jett, LL Cool J, Trombone Shorty and RDGLDGRN, Alt adds, “The show went great. Bryan had a good show and was very happy at the end of the night. I got to mix the opening act, so it gave me chance to evaluate the system as well. I couldn't be happier with the K2 investment that Delicate has made and was blown away by the performance.”

Recognized throughout the industry for pioneering the modern line array, L-Acoustics offers a total system approach for both the touring and fixed installation markets, and a product line responding to the needs of venues from the most intimate club to the grandest arena. L-Acoustics sound systems can be heard in places like the Hollywood Bowl, the NBA Houston Rockets Toyota Center, or the Philharmonie de Paris. L-Acoustics solutions have been used at five of the world’s ten top-grossing festivals*, the London and Sochi Olympics, and on the Justin Timberlake 20/20 Experience World Tour, among others.