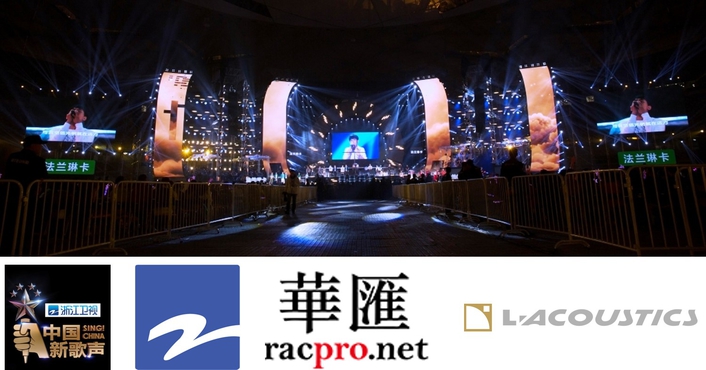 For the Sing China Final, held in the Birds Nest Stadium, 12 K1 and two K2 were positioned left and right for the main hangs to cover the field, with the top K1 covering a distance of 125m. Two side hangs of 10 K1 plus three K2 were covered levels 1 and 2

Held at the Beijing National Stadium, commonly known as the Birds Nest, the final of Sing China’s inaugural season attracted a live audience of over 60,000. Simultaneously broadcast by Zhejiang Television, the production required professional sound that would ignite the massive audience so their energy would translate into a dynamic show. Rightway Audio Consultants Ltd designed an audio system that was up to the Herculean task, utilising a total of 218 L-Acoustics loudspeakers.

“We supplied all audio requirements for the two Playoff rounds and the final, which were all mixed by Front of House engineer Mr. Jin Shaogang,” explains Vincent Zhou, system designer for L-Acoustics’s Chinese distributor, Rightway Audio. “We have worked with the show’s production team for many years, supplying L-Acoustics for other series and so the show’s audio director, Mr. Jin Shaogang was familiar with L-Acoustics and trusted the system. We were both confident that K1’s power and clarity would provide the right solution for Sing China.”

Having worked at the Birds Nest before, Vincent and the Rightway team were familiar with the venue’s challenging reverb, as well as the obstacle posed by two permanently installed LED screens on the right-hand side of Level 3.

Working in conjunction with Mr. Jin Shaogang and L-Acoustics’ applications engineer Alvin Koh, Vincent used Soundvision to design a system that deployed delays to ensure even coverage of the venue, including an asymmetrical flown delay system to account for the LED screens and provide even cover for Levels 2 and 3. This approach meant that Mr. Jin Shaogang did not have to drive the system too hard, keeping the volume at a level that accounted for the reverb while ensuring good intelligibility throughout.

The final design comprised 12 K1 plus two K2 left and right for the main hangs, which cover the field, with the top K1 covering a distance of 125m. Two side hangs of 10 K1 plus three K2 were positioned to cover levels 1 and 2 to the side of the stage.

“We used three K2 at the bottom of these arrays because we didn’t want the side hangs to affect the audience on the field, with the K2s at 35 degrees in / 55 degrees out to give us less coverage of the field and therefore provide less interference,” Vincent explains. “We had an additional three stacks of three Kara each for side fill and front fill, to ensure complete coverage. 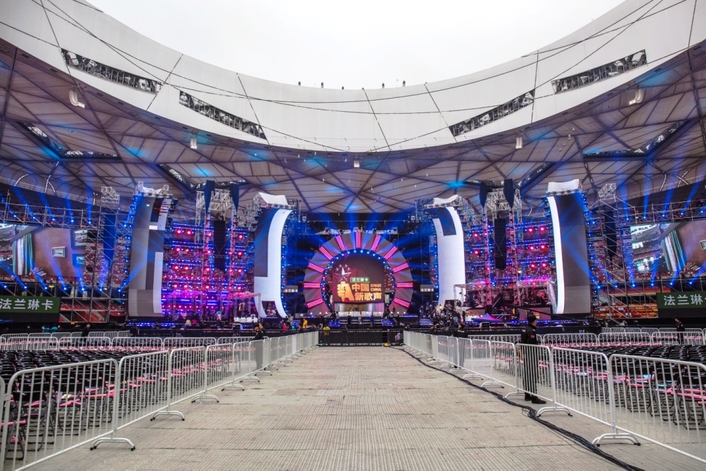 For the Sing China Final, held in the Birds Nest Stadium, 12 K1 and two K2 were positioned left and right for the main hangs to cover the field, with the top K1 covering a distance of 125m. Two side hangs of 10 K1 plus three K2 were covered levels 1 and 2

“We also used five ground stacked arrays of four K2, with two stacks either side and one in the middle to cover Level 1 at the rear of the stadium. These were very easy to move if we needed to and, by using K2-Jacks, we were able to make the bottom cabinet of each array an exact angle. We didn’t fly these delays because the back of Level 1 is shadowed by Level 2, and the flying position was too high to be able to get coverage to the back of Level 1.

“We had nine hangs using a total of 48 K1, 18 K2 and 22 K1-SB cabinets, with four of them at stage left and five stage right to prevent energy going to the screens.”

“We had 16 SB28s each side configured in cardioid,” he says. “When you have a long horizontal array, you get narrow coverage in the horizontal, so we had stacks of just two cabinets to make them lower than the stage. In the horizontal, we had eights stacks of subs. This meant that the horizontal coverage was a little narrow, so we added some delays at the outside of the subs.”

“Alvin gave me a lot of suggestions that were really helpful and, because Soundvision is such a powerful tool, I was able to produce a model that was very close to the Birds Nest’s model. The results were perfect and the entire team was very happy.”