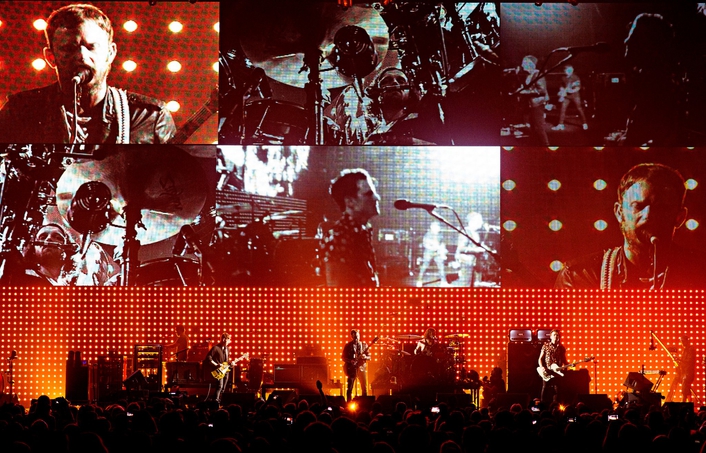 .
Long-term Sennheiser users Kings of Leon have spent most of 2014 on tour throughout Europe and the USA, promoting their latest album Mechanical Bull. Accompanying them at every show has been their trusty package of Sennheiser microphones and in-ear monitors.

The band and their engineers - Front of House engineer Brent Rawlings and monitor engineer Saul Skoutarides - have been dedicated Sennheiser users for over eight years. Vocal microphone of choice for the past six has been the MD 431, a microphone they are still very happy with.

“We have the MD 431 on all of the guys as it is very stable and has a very nice frequency response for vocals,” says Saul. “It also suits Caleb (Followill, lead singer) better than any other mic we tried in the past, which is part of the reason we stumbled upon it in the first place.”

“It’s very hard to go wrong with Sennheiser,” says Brent. “One of the best parts of this tour for me has been rediscovering the 421. Wow - that’s how a tom is supposed to sound!”

For monitors, ten sets of twin-channel SR 2050 in-ear systems equip the band and crew. “The 2000 series is far superior in terms of audio quality to anything else,” says Saul. “They are also more reliable than anything I’ve used before, in my opinion they really are second to none.

“The guys at Sennheiser UK have always been very helpful and supportive over the years. They are always willing to go the extra step to make something better. That includes listening to our needs as an end user and reacting accordingly, or just putting out a great product in the first place!”

About Sennheiser
The Sennheiser Group based in Wedemark near Hanover, Germany, was founded in 1945 and has gone on to become a leading manufacturer of microphones, headphones and wireless transmission systems. Sales in 2013 totalled 590.4 million euros. Sennheiser employs more than 2,500 staff worldwide and operates plants in Germany, Ireland and the USA. The company has a worldwide network of subsidiaries in France, Great Britain, Belgium, the Netherlands, Switzerland and Liechtenstein, Germany, Denmark (Nordic), Russia, Hong Kong, India, Singapore, Japan, China, Australia and New Zealand, Canada, Mexico, and the USA. It also has long-established trading partners in other countries. Georg Neumann GmbH, Berlin, a maker of studio microphones and monitor speakers, and Sennheiser Communications A/S, a joint venture making headsets for PCs, offices and call centres, are also part of the Sennheiser Group.