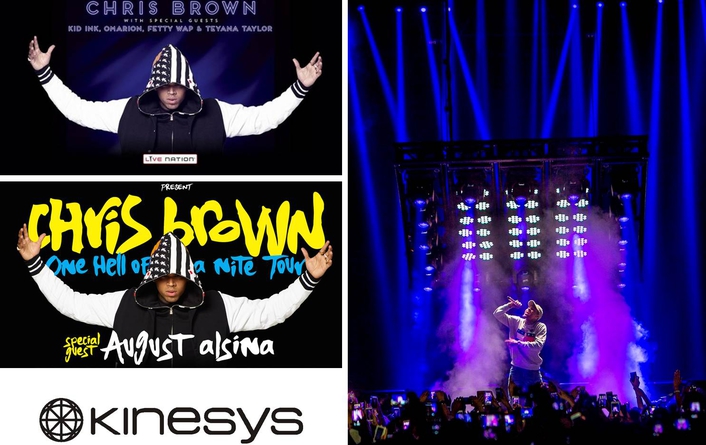 Chris Brown’s recent “One Hell of a Nite” UK and European tour featured a production design by Tom E. Marzullo from Out Of Our Minds Creative Services, LLC, developed in collaboration with Christie Lites’ Robert Roth and Robert Achlimbari from staging specialist All Access. The design included two lighting pods which were moved using a Kinesys automation system supplied by HSL from Blackburn UK, also the tour’s lighting and rigging vendors. 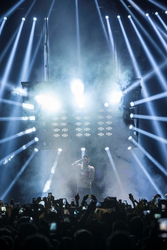 The two lighting pods were both loaded with a 6 x 6 grid of Elation SIXPAR 200s with 16 x Clay Paky Sharpies around the perimeter of each. They were in mid-stage and downstage positions – and moved up and down and tilted at key moments in the show.

In the opening scene, Chris Brown made his entrance on a hydraulic stage lift that came up beneath the mid-stage Pod which was in the down position at the time, so the lights on it created a moody halo effect above his head before flying out.

The downstage pod – above the B-Stage - made two moves during the song "Stereo", the first with Brown standing below, and as he started the number it flew in and tilted behind him ... lowering to within about 200 mm of the back of his head!

Both pods were made from five 3-metre sections of HSL low profile trusses bolted together via custom brackets giving plenty of stability, and they performed some other moves through the show.

Paddy operated from the side of stage and also co-ordinated the production’s lightning and video rigging, assisted by Alex McGregor.

He's been using Kinesys products for over a decade now, thoroughly trusts the “rock solid” brand and it's his automation system of choice for live shows and events of all types.

"The technical and product support from Dave (Weatherhead) and Martin (Honeywill) is really amazing. They listen properly to what you’re saying and fully understand the real life parameters of touring. There is also an excellent community of Kinesys users out there now which is also invaluable". 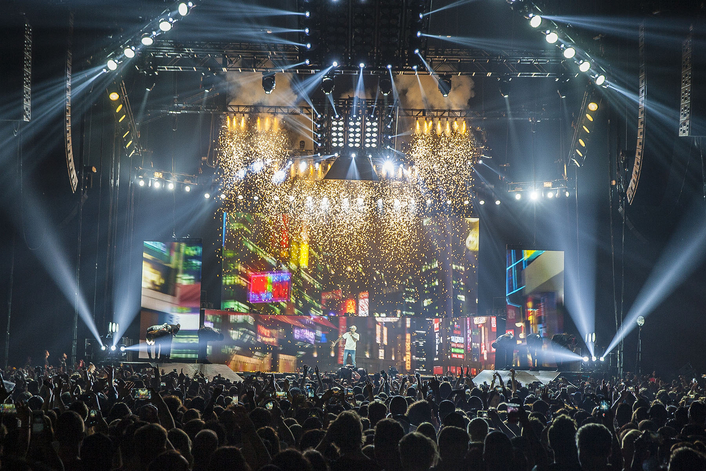 On the kit itself, he says, 'it's reliable and well designed and extremely flexible - what more can you ask for?"

There were nearly 100 motors in total on the Chris Brown tour, and the production featured two significant mother grids which were used to facilitate the substantial lighting and video packages.

Paddy, whose company Enhanced Automation is based in Cardiff, really enjoyed the whole experience, especially working with Tom E and with lighting director Charles Ford as well as with the HSL touring lighting crew of Simon “Piggy” Lynch, Simon Anderson and Dan Cloak.