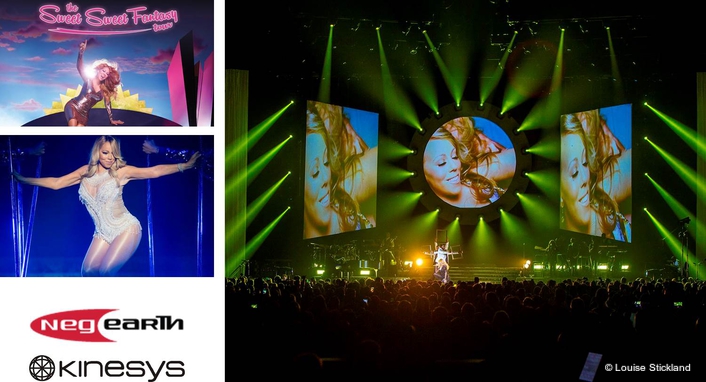 For the arena shows, four 8 metre high by 2 metre wide projection columns glided on and offstage with video content mapped precisely to them as they moved, a stunning result achieved using an interface between the Kinesys Vector automation control system and the VYV Photon media server.

Just upstage of these, four lighting ladders also moved into different positions related to the configuration of the screens at the time, allowing the moving lights rigged on them to beam through the gaps.

The Kinesys system was operated by Jonathan Wood of Event Automation & Lighting Services and supplied to the tour by lighting contractor, Neg Earth Lights. The media server was operated by Ellie Clement from Lucky Frog with projection equipment supplied by CT.

The moving screens flanked a static circular screen centre-stage and worked either as four striking individual columns or as two larger screen areas, with VT and ambient projection running through most of the show. 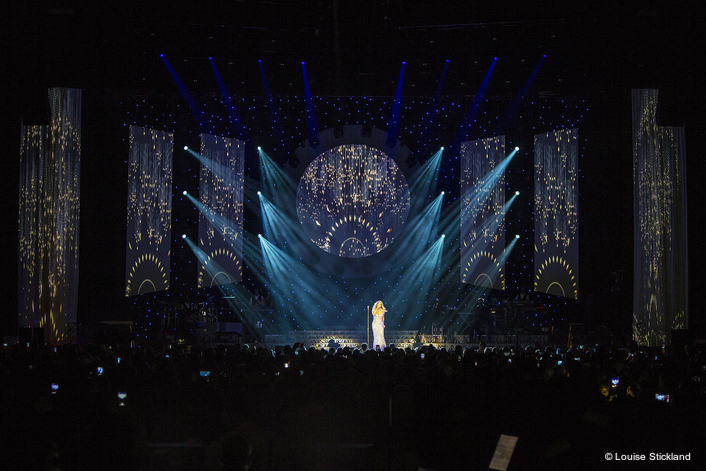 These and the trussing ladders immediately upstage were rigged on new Litec DST52, a 52 cm stacking truss product developed by Litec with Kinesys supplying the trolleys that run within it.

Neg Earth Lights connected these two innovative products to ultimately produce a solution for the client.

The DST system operates using an inbuilt rack-and-pinion drive and the Kinesys Elevation 1+ powered DST trolleys can move up and down its entire length - in this case 24 metres for screens and the two 10 metre lighting trusses.

Each beam trolley has two lifting points used to pick up the lighting ladders – each ladder containing a mix of Clay Paky Mythos and Martin MAC Viper AirFX fixtures.

Around 15 different movement looks that changed throughout the show were programmed into Kinesys’ Vector control software.

It was Sean’s first tour with Mariah Carey, although he worked on some large one-offs and TV specials for her before being asked to create the touring production design, which was energised in a very short timescale with a few practical requirements to consider based around available truck space. 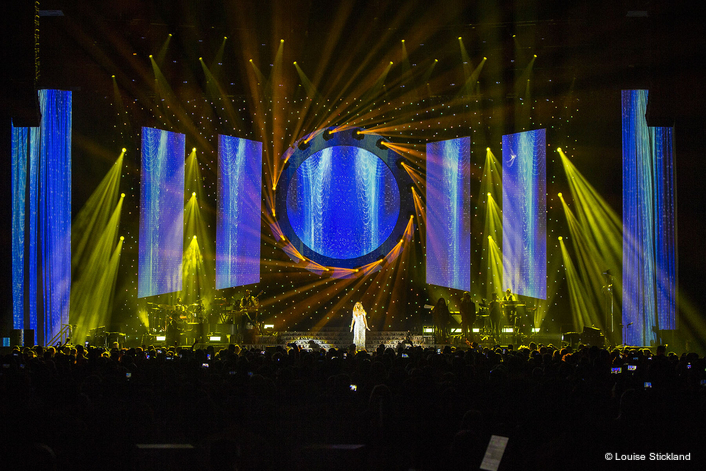 Sean planned automation in the design from the outset because “visually we needed THAT something extra, and being able to move the screens and the lighting ladders added a whole new layer of choice and new perspectives to the space”.

They also needed a compact system to fit into the trucks space and Kinesys, utilising the DST52, proved a perfect practical as well as aesthetic solution that upped the drama and dynamics of the show.

Tom Woodcroft came on-board as video editor while Sean asked Richard Turner of Lucky Frog to join the team and ensure this content would work a stage / show context as well as design the hardware system and co-ordinate all things video.

This included synchronising the positional information transmitted by the Kinesys Vector software as the screens move … with the video content being projected, a feat achieved with the application of some serious algorithmical magic in the Photon media server. 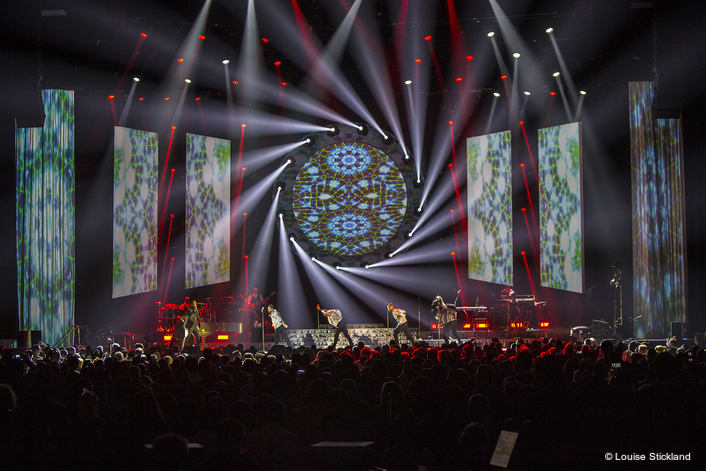 “Kinesys is very user friendly and I will happily use it again … and more of it,” concludes Sean who was delighted with the results.

He and Jonathan Wood have also worked together for many years and Jonathan – a lighting technician before specialising in automation – has used Kinesys regularly since a 2006 tour with Muse. On this occasion, he was working for Neg Earth Lights.

On the road, Jonathan could build up all the comparatively light and straightforward to use automation elements utilising four stage hands which made things extremely quick. For him, the Kinesys Vector control platform is very well established, reliable, fast to use and a logical choice!

The 3 metre lengths of DST52 were all fitted 4-high on custom wooden skates built by Neg Earth Lights and wheeled on / off the truck each gig providing an extremely neat travel-solution for the entire movement system.

Neg Earth Lights was one of the first UK rental specialists to invest in Kinesys over a decade ago and is currently the only UK company stocking the DST52 trussing system, the latest in a long line of creative automation products they have embraced.