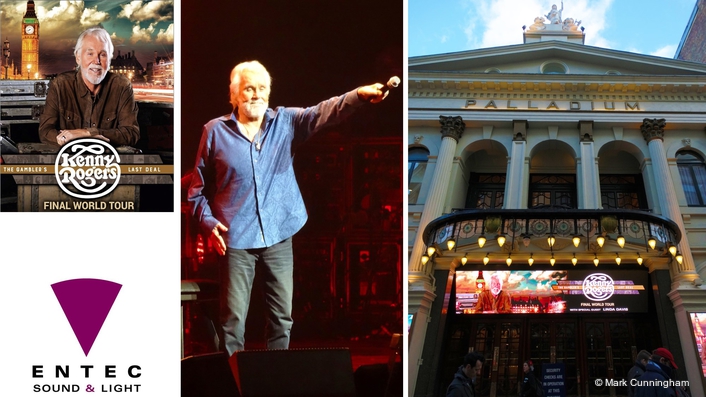 Country music legend arrives in the UK on farewell tour

One of America’s greatest musical exports with a career spanning 60 years, Kenny Rogers visited the UK and Europe in November as part of his very last tour. Titled The Gambler’s Last Deal, referencing his 1978 worldwide hit, this leg of the tour saw the 78-year-old icon perform to standing ovations at venues in Glasgow, Amsterdam, Basel, Dublin, Belfast and London, where he played a pair of shows at the Palladium and Eventim Apollo Hammersmith.

Supporting him in London and extending a seven-year association with the artist, Entec provided sound and lighting packages, along with a five-man crew who reported to Rogers’ long-time technical director and monitor engineer Frank V. Farrell. “I’m the new guy – I’ve been working for Kenny for 26 years,” laughed Farrell, whose responsibilities have extended to managing the star’s recordings and deputising both as drummer and bus driver when duty has called. “Whatever it takes, I’m there!”

Featuring special guest Linda Davis and including such classics as ‘Ruby, Don’t Take Your Love To Town’, ‘Lady’, ‘Islands In The Stream’, ‘Coward Of The County’ and his UK chart-topper ‘Lucille’, Rogers’ show relies heavily on a career history-based narrative with the singer reminiscing on his journey in music, underpinned by video content dating back to the mid-1950s.

Prior to soundcheck at the Palladium, Farrell explained Entec’s role: “We’ve involved them in Kenny’s tours since 2009 and we’ve always appreciated the support that [managing director] Noreen O’Riordan and her staff give us whenever we’ve come over. This time we are renting sound and lighting from Entec but our requirements can vary. We place the responsibility of booking all elements of production with the promoter – in this case 3A Entertainment – and we supplement with items that we can bring from across the pond, which is usually just band gear under 50lbs. Of course, the promoter will listen to my recommendations and I have no hesitation in directing them towards Entec as a preferred vendor.”

He added: “There’s no denying that Entec’s gear is top notch but it really comes down to the quality and reliability of service, and I have great respect for their staff who work very hard to make everything just right. There are other vendors that I’ve used before but Noreen completely understands where we’re coming from and that’s reflected in her team’s efforts, and the way they handle themselves.”

Rogers’ touring crew of five augmented house PA systems with audio equipment from Entec, including an Avid Venue Profile for monitors and another for Keith Bugos, the FOH engineer/production manager who has served the artist for around 40 years. “Back in the States, we are self-contained, and Keith and I were among the very first engineers to purchase Digidesign Venue consoles when they arrived on the market,” commented Farrell.

“Of course, the branding has since changed to Avid and I’ve had a good relationship with them for around 15 years, helping them with the beta testing of newer products, so it’s rewarding to find Profile consoles amongst Entec’s inventory.

Praising his colleague at FOH, Farrell said: “Keith is an incredible sound engineer; he’s one of the most intuitive people you’ll ever encounter. In the ’90s, I briefly went away to work with Steve Miller in a studio capacity and when I returned, Keith and I pooled our production expertise. We’re a pretty good tag team because whereas I’m more of a technical person than Keith, he is definitely better with logistics.”

On stage, Entec supplied eight d&b M4 floor monitors with D80 amplifiers for Rogers and his band, some employing back-up from hardwired Shure in-ear monitors. Said Farrell: “I’m an old Clair guy and have sworn by the 12AM wedge for years, however, I am very happy with the d&b M4. In fact, I love it – it’s a wonderful wedge that works very well on stage with this band. 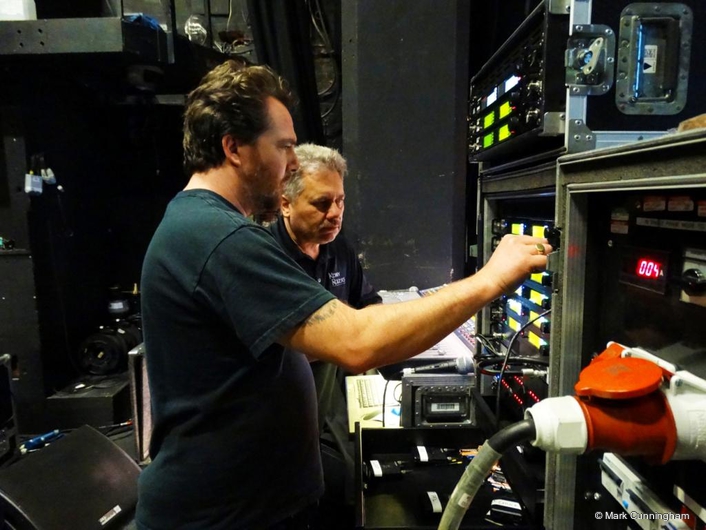 “Kenny’s a wedge man. I’ve tried him on a variety of in-ear brands but the cranial effect bothers him. He doesn’t even like to wear headphones when he’s recording. I’m just sending a full stereo mix into a pair of M4s angled around his microphone stand and he’s happy. We’ve been doing it for so long that can look at him and instantly know if he needs more 2k, and his mic technique will tell me if I have the wedge level too hot.

“The most wonderful thing about Kenny for me is that he’s the true definition of a gentleman. I’ve never known him to yell at someone for making a mistake; in fact, he’s never fired anybody. Some have moved on or retired, but not at Kenny’s will. Consequently, a few of us are getting quite a bit older ourselves, however, what usually comes with age is experience.”

Farrell generates eight stereo mixes in total. “The guitars go through a bunch of modelling devices, such as a Line 6 and an Avid Eleven Rack, from which I take a direct output, and the bass is the only ‘live’ instrument in terms of using onstage amplification but we turn his 4 x 10” cabinet towards him to minimise bleed. The show is very subtle at times. We like to take care of the energy with the monitors and the mains, and not let it come from the band, because we can manipulate it better for Kenny. You still know it’s a fully live band but it’s vastly more controllable and ends up sounding consistent from venue to venue, regardless of their size.” 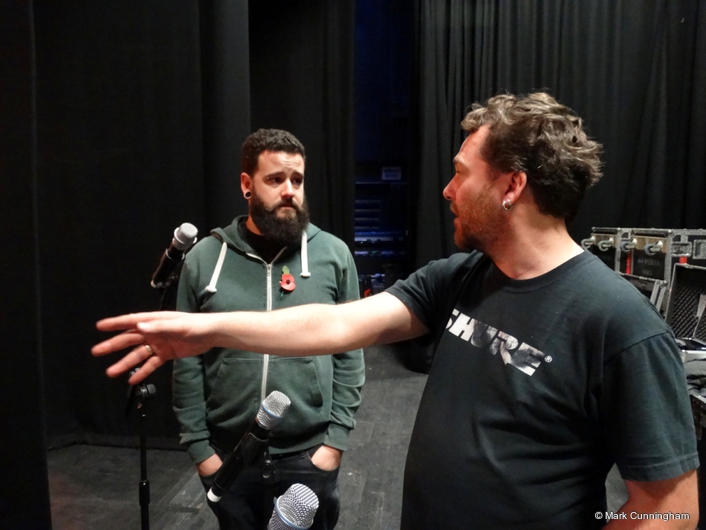 Entec’s microphone package included the Shure UR4D+ wireless system with a UR2 handheld transmitter and Beta87A capsule as Rogers’ vocal choice. Farrell elaborated: “Kenny likes to use a lightweight mic. People have sometimes said that a Neumann capsule would be perfect for him but it’s too heavy. I personally like the Sennheiser 5200 series mic for him [which Entec also stocks] but what we have for these dates sounds just fine.

“I don’t add compression to Kenny’s mic. Being an old school singer, he can do that job himself just like all of his contemporaries who learned to manoeuvre the microphone correctly. There’s a set of Avid plug-ins I like called Reel Tape Suite that add a warm saturation to the sound like an old Fostex M80 machine. Wow and flutter is an option but I don’t think it’s appropriate in this situation!”

Farrell and Bugos were aided in the sound department by Entec’s James ‘Kedge’ Kerridge and Rik Hart – the latter taking care of the RF elements of the production.

Whilst directing the overall technical operation, Farrell admitted that he has maintained a “hands-off” approach when it comes to lighting Rogers’ shows, leaving this responsibility to seasoned lighting director Jeff Metter, a South African with US citizenship who, according to Farrell, “commutes from South Africa about once a month so Delta Airlines love him.”

Metter also joined the team in the early ’90s after chalking up a diverse range of credits with the likes of The Grateful Dead, the Stones, Lenny Kravitz, The Beach Boys and Madonna. “You mean Daisy,” grinned Metter. “That was my pet name for her when I worked with her on the Who’s That Girl tour back in ’87,” he added, offering proof by way of a photo portraying him in his hairy, bare-chested youth with the Material Girl herself.

The main feature of the stage was a series of six elegant towers formed by hoops and white gauze, under-lit by a single Sharpy Wash to produce a stylish gradient effect. 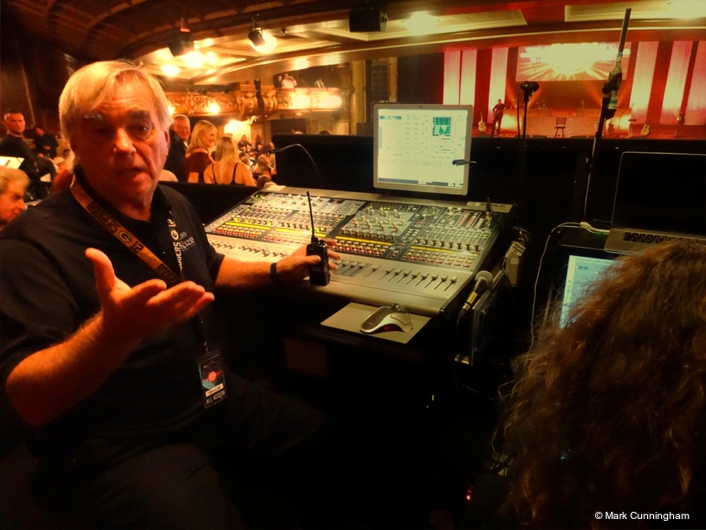 END OF AN ERA

Frank Farrell was delighted to find the Palladium included on his boss’s tour itinerary for the first time. “It’s great to see how they’ve remodelled the backstage area,” he said. “It’s made life a lot easier and looks very smart. One of the things that we particularly like about British audiences is that they pay attention – they’re really listening to the music and Kenny appreciates that.” 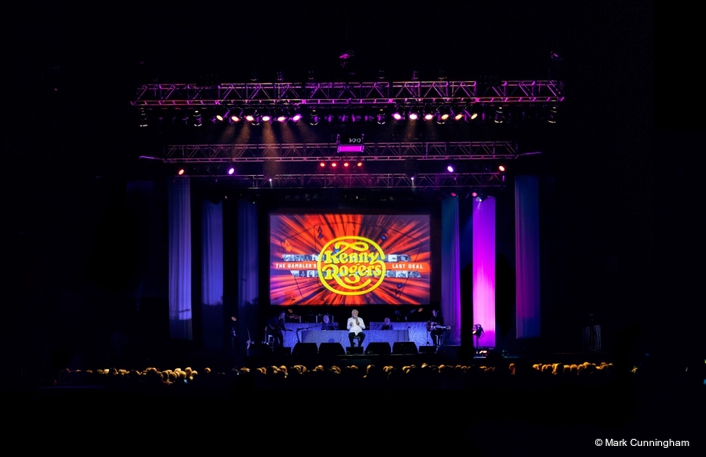 Unlike many farewell tours that have preceded eventual comebacks, Rogers’ is a genuine goodbye that will soon reach the end of the road on American home turf, stated Farrell. “Kenny’s mobility has been suffering and despite some corrective surgery he still has some trouble walking. He does, however, retain a good voice, which is obviously important as a performer.

“We’ve had to a drop key here and there with some songs to help his range but it doesn’t detract from the experience. When he starts those iconic numbers it’s unmistakably Kenny Rogers and we’re all very proud of what he does. I hope I’m as healthy, wise and in such good spirits when I reach his age.” 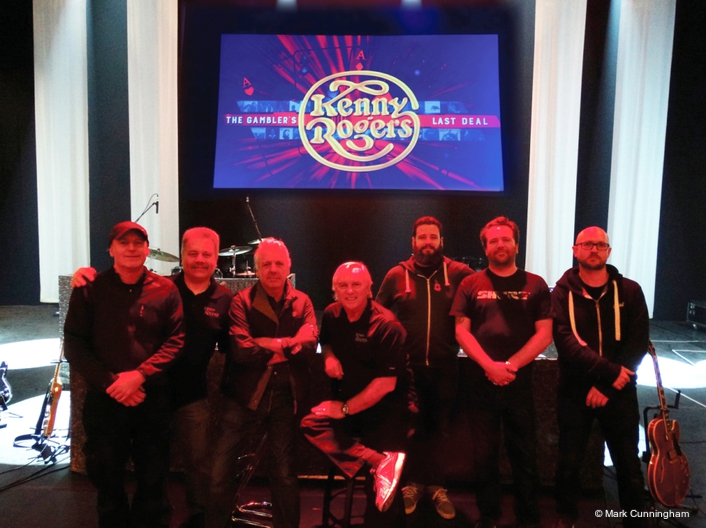